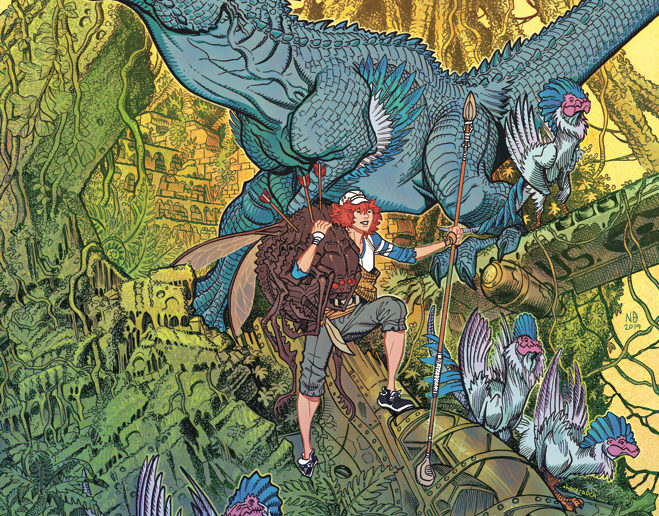 With the Spring season comes a renewed appreciation for fresh ideas and new scenery… and IDW Publishing (OTCQX: IDWM) is all too thrilled to accommodate! For comic readers looking to discover the next mind-bending phenomenon a la Locke & Key, the month of May will see the debut of three IDW original series — Chained to the Grave, Sea of Sorrows, and Bermuda — alongside the return of a fan-favorite adventurer with Canto and the Clockwork Fairies.

“New stories, new characters, new creators — these are IDW’s favorite things,” says IDW Editor-in-Chief John Barber. “It’s amazing to see four unique series, each with their own personalities, all arriving in the same month. We have returning creators, new voices, and industry veterans, all doing the best work we’ve seen them do!” CHAINED TO THE GRAVE
by Brian Level, Andrew Eschenbach, and Kate Sherron

Outlaw Roy Mason has come back from the dead, chained to the headstone that marked his grave. It’s a lawless time, a magical time, and the undead Roy soon finds himself caught between a rock and a hard place as he sets out in search of treasure. But Roy, trying to do right by the wife and children he left behind, soon finds out that everything is not always as it seems…

“Chained to the Grave is a supernatural Western romp on the surface, packed with odd characters and wild trope-bending action,” says Eschenbach. “Dig in a little, though, and you’ll see that it’s a story about very bad decisions, and the blast radius they leave behind… even after death.”

“What started as a series of scattered ideas between Andy and I quickly became the unusual dust devil that kicked us off. It took Kate’s uniquely beautiful visuals and Micah’s smoothly seamless letters to wrangle those ideas into the shape that we now call Chained to the Grave,” says Level. “Chained to the Grave is the Western you’re used to being wrung out until it bleeds a whole new color.”

Sherron says, “I can’t thank Andy Eschenbach and Brian Level enough for creating a story that is not only fun to read, but wildly fun to draw. The guys gave me a familiar place to start, turned it on its ear, and then handed me the reins — with a unique Western like Chained, there’s so much room to play and I’m having a blast finding engaging characterizations, kinetic line-work, and expressive palettes to tell the tale. I hope everyone gets as much a kick out of this story as I do!”

Chained to the Grave #1 will be available with Cover A by Kate Sherron, plus a Retailer Incentive variant edition by Brian Level. SEA OF SORROWS
by Rich Douek and Alex Cormack

Building upon the success of last year’s hit horror series Road of Bones, the creative team of writer Rich Douek and artist Alex Cormack reunite to bring readers a deep sea adventure with a horrific twist: the five-issue Sea of Sorrows!

In the aftermath of the Great War, the North Atlantic is ripe for plunder by independent salvage crews. When a former naval officer hires the SS Vagabond, he leads the ship to a sunken U-boat, and a fortune in gold. Tensions mount as the crew prepares to double cross each other, but the darkness of the ocean floor holds deeper terrors than any of them have bargained for!

“Alex and I are excited to put the same twisted imaginations that brought you Road of Bones to work on new places, new characters, and of course, new heights of unspeakable terror,” says Douek. “Get ready for another dark journey into the horrors that lurk within the pages of history!”

“The ocean is a terrifying and mysterious place,” says Cormack. “Sea of Sorrows reveals the isolation and horror of being in an alien world on our own planet, facing threats that should be impossible, chasing you through an inescapable setting. With the character designs and especially the story, this would be a book I’d draw just for myself. Rich is a talented writer and great collaborator. I’m happy to be along for the ride!”

Sea of Sorrows #1 will be available with Cover A by Alex Cormack, plus a Retailer Incentive variant edition by Katie Sawatsky. CANTO AND THE CLOCKWORK FAIRIES
by David M. Booher and Drew Zucker

Canto, the little tin hero who was the talk of 2019, returns in May with the one-shot special, Canto and the Clockwork Fairies. Written by David M. Booher and illustrated by Drew Zucker, this comic story sends Canto and his Malorex deeper into their magical world — literally — to face a sinister mechanical witch who has captured a gentle race of fairies. Can Canto liberate these sweet creatures before he’s taken captive himself?

“Drew and I are thrilled to bring Canto back in 2020 with Clockwork Fairies,” says Booher. “When we came up with the first seeds of the idea for Canto, we knew that his world was expansive. Now we have the chance to share a side story exploring one of the many mysterious corners of this fantastic land. We’re so grateful to the readers who took the journey with Canto in 2019 and we can’t wait for readers to see what we have planned for this year.”

“What David and I started in the first volume of Canto was only the beginning,” says Zucker. “We spent a lot of time hinting at Canto’s world in the background, but what’s really exciting about Clockwork Fairies is having a chance to explore not only more of the physical world, but the characters that inhabit it. It’s exciting for us as creators to discover these characters the same way that the hero does.”

Canto and the Clockwork Fairies will be available with Cover A by Drew Zucker, plus two Retailer Incentive variant editions, by Nick Robles (Euthanauts) and Mateus Santolouco (Teenage Mutant Ninja Turtles: Shredder in Hell) respectively. In the Atlantic Ocean, there’s a region where planes disappear, ships are lost, and traveling souls go missing… never to be heard from again. And there’s an island within this place, mysterious and uncharted, an island untouched by time and civilization, where all who are lost end up. Bermuda lives here. She’s 16, scrappy, and a survivor, and this has been the only life she has ever known… until today. She’s discovered something on her Island that will either open a doorway between her world and ours… or destroy them both!

“Bermuda is the best Disneyland ride never made. A thrill-ride of nonstop action and adventure, filled with dinosaurs, pirates, crazy creatures and insane soldiers, dark magic and mad science, all on a mysterious beautiful island shrouded in secrets and mystery,” says Layman. “Nick Bradshaw’s pages are drop-dead gorgeous. Like, take-your-breath-away-and-leave-you-gasping gorgeous. There’s a strong possibility that this is the most stunning and beautiful book I’ve ever been a part of. It’s gorgeous and beautiful and —most of all— fun!”

“I’m excited to be working on Bermuda,” says Bradshaw. “John is giving me thrilling stories full of adventure and suspense — so much so, I don’t know if I can do them justice, but I’m sure as hell going to try!”

Bermuda #1 will be available with Cover A and a Retailer Incentive variant edition by Nick Bradshaw.