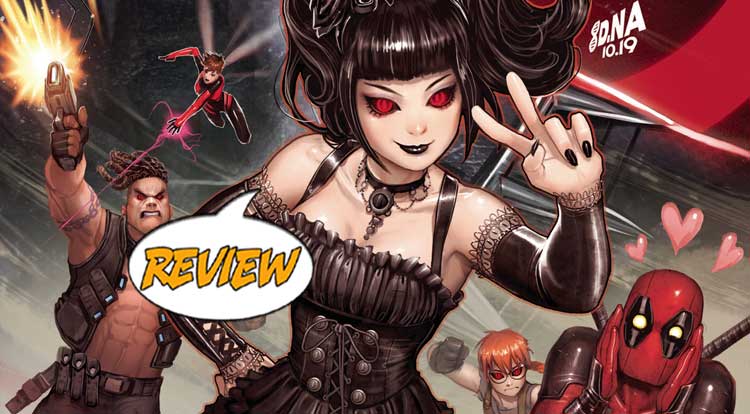 Black Panther and the Agents of Wakanda #6 Review

Even The Black Panther isn’t ready for The Livewires…  Your Major Spoilers review of Black Panther and the Agents of Wakanda #6 from Marvel Comics awaits! Previously in Black Panther and the Agents of Wakanda:  An old S.H.I.E.L.D. cache of experimental technology is a ticking time bomb the Agents of Wakanda need to defuse… but only if they get there before Deadpool does!  Time for a rematch between the King of Wakanda and the Merc with a Mouth!  And adding more fuel to fire – the return of the Livewires!

After a brief conflict with his Dora Milaja commander Okoye about the makeup of his unusual group, The Black Panther feel into a trap (thanks mostly to Deadpool.) In an abandoned SHIELD base in Nevada, Panther and his team (The Wasp, Roz Solomon, Dr. Nemesis and the aforementioned Okoye) are at the mercy of the Livewires, a group of androids who have been operating in the fringes of the Marvel Universe, led by Colonel Nick Fury! Or at least led by a Fury LMD who wants to save the world from chaos, and unleashed a cybernetic apocalypse to do so. Fortunately, Stem Cell, one of the Livewires, is able to regain her senses and even bring her pals back from the LMD’s control, while The Panther and Doctor Nemesis deal with hordes of disposable soldiers. The Livewires end up sacrificing themselves as the base explodes, while Okoye realizes that this team has it’s advantages, even if they’re not up to her military standards.

And then, a mysterious automated SHIELD base in Australia is remotely activated…

SOMEBODY REMEMBERED THE LIVEWIRES!

The wonderful part of Zub’s work on this book is in seeing characters who are normally “fifth guy on a team of four” used as the center of attention. Doctor Nemesis proves a perfect foil to T’Challa and Okoye here, insisting that he stay behind and being amazing at Okoye’s leadership, and it’s wonderful to see The Wasp used well. (I think the last time she was this well-written was during Busiek’s Avengers run more than a decade ago.) The use of Deadpool is also quite well-done without being overwhelming, and I appreciate the use of The Livewires, tying up a fifteen-year-old plotline while providing important lessons for our team and its field leader. Scot Eaton’s art is pretty interesting as well, delivering on moments like Goth Lolita slashing DP’s throat or Nick Fury being shot in the face without delving into gore, and making good use of the dark corridors of a hidden SHIELD base for dramatic moments. The end of the story comes rather abruptly for my tastes, and while I appreciate the fact that Stem Cell was key in the defeat of the Fury LMD’s plans, it really felt like the other Livewires didn’t do much at all during these pages, which is something of a letdown.

In short, even though I didn’t feel like the cover-billed guest stars got the attention I would have liked, Black Panther and the Agents of Wakanda #6 delivers with solid art and a plot that lets us get in the heads of the characters, with enough action to keep it all flowing, earning 3.5 out of 5 stars overall. I really enjoy a comic that shines a light on underused or underdeveloped characters, and this one is a doozy, tying in the current madness of The Avengers title with the quieter dirty work moments that you know have to be taking place, making for some fun drama with interesting characters.

It ends a bit anticlimactically and doesn't make full use of the guest-villains, but it's a well-written story with better-than-average art and features a super-strong goth girl robot... What's not to like?