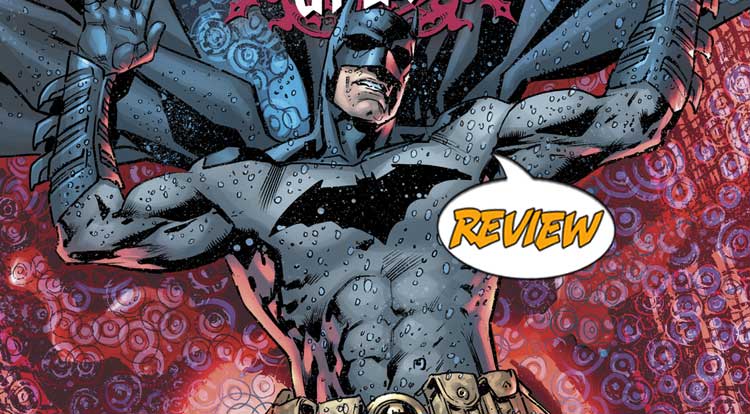 A deadly conundrum leads Batman to Arkham Asylum… and perhaps, his doom.  Your Major Spoilers review of Batman’s Grave #5 from DC Comics awaits! Previously in Batman’s Grave: The Batman is summoned to Arkham Asylum, where he is presented with parts of a deadly puzzle he couldn’t see assembling all around him.

And he may not make it out alive.

Our story opens with Commissioner Gordon receiving an important call and smiling that he’s finally one step ahead of his caped associate. When Batman arrives at Arkham Asylum, after the Bat-Signal flares, he is greeted by Dr. Jeremiah Arkham, who seems to be intentionally goading him for some reason. Arkham reminds the Caped Crusader that his room will always be ready, “for the day you admit you need help”, then takes him to Gordon. Along the way, Batman notices a number of disturbing moments, including pools of blood being mopped up, as Gordon explains about recent occurrences and a new quasi-terrorist organization called The Scorn Army. An interrogation of a criminal called Flamingo (who doesn’t seem to be the same one who fought El Gaucho) goes horribly wrong when an orderly shoots Batman in the back and the criminal in the head, leading the commissioner and the vigilante to fight their way past an army of goons all bearing the Scorn Army’s tattoos, ending on a cliffhanger as Batman realizes that they’re targeting members of the Justice system, making Gordon a target.

This issue contains a lot of truly excellent details and character moments, even though it really only features 4 characters. Gordon’s glee at knowing something Batman doesn’t is wonderful, as are Dr. Arkham’s attempts to plumb Batman’s psyche (though, combined with the attack, make it seem like he may be in on the crimes being committed.) Even Batman’s insistence that Gordon shoot only to wound as they are swarmed with homicidal cultists is great, and I like the terse-but-not-awful Warren Ellis Dark Knight. There are some problems in the art for me, as the inking of Nowlan overpowers Hitch’s pencils on the pages that he inks (and it’s very obvious which ones those are.) Nowlan’s take is attractive and spooky, but the difference between a Nowlan-inked page and one that’s all Hitch is very jarring. I also feel like I should warn readers that an Ellis book will be a very cynically toned affair, which absolutely works in these pages, but may not be to everyone’s tastes. When Commissioner Gordon snarks that he was forced to light the signal and frighten half the city because he didn’t have Batman’s number, I found it quite amusing, but that sort of gallows humor isn’t universal.

BOTTOM LINE: TENSE AND COMPELLING, WITH A VERY HUMAN BAT

All in all, Batman’s Grave #5 succeeds on a number of levels, given Batman a mystery that you want to unravel, allowing the Scorn crew to get in a few shots to remind us that he’s not infallible and making James Gordon as interesting as The Bat, with very good (if mismatched) art all around earning 3.5 out of 5 stars overall. I won’t always recommend a Bat-book, but I’m happy to say that this one has a lot of potential and I enjoyed it.

The inking isn't always to my liking and it's a very cynical book, but the mystery is engaging in a very Warren Ellis way.