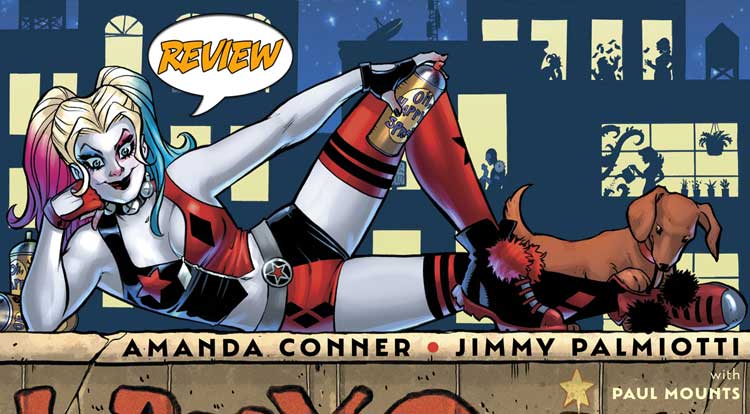 Harley Quinn and the Birds of Prey #1 Review

The Joker has put a bounty on Harley’s head, and only an unusual group of friends can save her bacon.  Your Major Spoilers review of Harley Quinn and the Birds of Prey #1 from DC Comics awaits! HARLEY QUINN AND THE BIRDS OF PREY #1

Previously in Harley Quinn and the Birds of Prey:  Harley Quinn has avoided Gotham City ever since she broke up with The Joker and found a home, and a kind of family, in Coney Island.  But when she gets an offer she can’t refuse, she has no choice but to slip back into the city as quietly as she can, hoping to be gone before anyone – especially her ex – learns she’s been there.  But for Harley, “as quietly as she can” is plenty loud…

Our story opens with a dream sequence, with Harley and Poison Ivy lounging about a desert island while Superman and Red Tool (a Harley super-fan whose name rhymes with the character he’s parodying) wait on them hand and foot. Harley awakens to a much less idyllic reality, with her hotel burned down by mafiosa, a friend in the hospital and the homeless Gang of Harleys sharing her bed… all six of them. The bed full of half-naked people just the first in a series of lewd inferences in this issue, as Power Girl finds out the hard way when she stops to offer a shoulder and gets sexually harassed. Harley’s situation is quite dire, despite her urge to shower with Kara, and after a visit to her hospitalized pal Tony, Harley brings the pain (and a funny series of F-Bombs) to the crimelords who have targeted her. After her bloody-yet-unsatisfying revenge, she sets out for the one place in the world that’s most dangerous to her: Gotham City. Encountering The Huntress on the train, she engages in more ultra-violence, then bumps into Cassandra Cain and Renee Montoya as she arrives in Gotham.

But they’re not the only one waiting for her, as The Joker hears she’s back in town as well…

AS SEEN IN THEATRES!

There’s always a fine line to be drawn when dealing with an “uncensored” take on an all-ages property, and this issue mostly works, partly because of Harley’s unpredictable nature. The sequence where she announces that her name is Harley F. Quinn and tries to make a joke about what the F stands for, only to be surprised by bullets and scream the F-word is quite funny, and the out-of-control emotions that drive her make it perfectly believable that she might be cursing in such dire straits. But by the end of the issue, though, the cumulative effect is a little wearisome, especially given that the creators make a point of cutting of the truly heinous C-word before a villain can yell it, and the careful way all the topless Gang of Harleys’ breasts are artfully hidden from view. It’s a weird, but common double standard, but at least Conner’s art makes the entire issue gorgeous to look at. The fight scenes are vivid and kinetic and the romantic getaway for Harley and Ivy is beautifully rendered, especially the facial expressions of angry Ivy and pouty Harley after their boat floats off.

In the final analysis, though, Harley Quinn and the Birds of Prey #1 is a little bit TOO frenetic for clarity, with tons of creator-favorite characters (Power Girl, Red Tool, the Six Harleys, Huntress, Poison Ivy and more) doing their thing in a plot that feels like an out-of control roller coaster, paired with art so pretty you almost don’t care, earning 4 out of 5 stars overall. I enjoyed the tone and there’s a lot of potential in the plot, but things like her lover’s quarrel with Poison Ivy or the destruction of her Coney Island hotel would really warrant more attention than they’re getting. But maaaaan, that art is just SO GOOD.

HARLEY QUINN AND THE BIRDS OF PREY #1

It's certainly not gonna be for everyone, but much like Deadpool, Harley transitions well to working blue. Even if the story moves a bit too fast with a bit too much adult content, the beautiful art hits the spot.