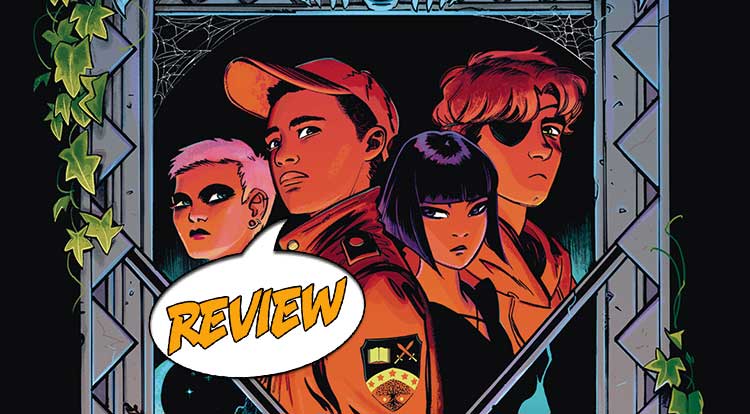 Blackwood The Mourning After #1 Review

In Blackwood: The Mourning After #1 from Dark Horse Comics, the faculty gather to mourn Dean Ogden in the aftermath of a magical disaster, while classmates bicker and bond over the death of fellow student Dennis.  The Book of Despair has gone missing, taken by Ogden’s twin headed chimp and a mysterious figure lurks in the shadows, threatening everyone.  Who will live and who will die at Blackwood?    Find out in our Major Spoilers review! BLACKWOOD THE MOURNING AFTER #1

Previously in Blackwood:  Dean Ogden had reigned at Blackwood College’s school of magic for three centuries.  But, no more.  In the aftermath of his death, the faculty gather to mourn and bury him, while several new students at Blackwood – Reiko, Stephen and Wren – come together to mourn their friend and fellow student, Dennis.

It’s hard these days to write a story involving a school of magic.  Everyone’s head goes immediately to Harry Potter.  This is unavoidable of course as we see with Blackwood #1.  New students bond together over the recent death of a fellow student, Dennis, in somewhat mysterious circumstances.  Faculty members come together themselves to bicker and gossip about Dean Ogden’s replacement with the decidedly non-magical Dean Colby.  There are books of magic, creepy classrooms and strange beings lurking in the shadows.

What sets Blackwood #1 apart is the more modern feel to the story – the students drink beer, bicker and bond in a more realistic setting, talk about reddit, and generally feel more up to date than their Hogwarts counterparts.  Coupled with a darker mood and setting, and despite the fun banter, Blackwood #1 is an altogether different prospect than Rowling’s creation.

Award winning writer Evan Dorkin has crafted a really fun opening issue here, as the faculty and students gather to mourn the death of Dean Ogden and Dennis, in somewhat shady circumstances.  Ogden has been dabbling in the darker arts, and a curse of his own making appears to have settled on the students.  Reiko, in particular, is keen to investigate Dennis’s death more deeply, which allows for darker events and characters to be displayed.  The characterisation of the students in particular allows for some fun writing, as they feel like real students – interested in partying and beer, and less so in their studies at Blackwoods.  The banter, particularly between Stephen and Wren, feels fresh and real, and helps bring the characters to life in an amusing way.

The faculty members are treated a little less fresh – most of them are oddballs and kooks more interested in faculty politics.  The new dean, Colby, has a rivalry with Professor Mortlake, and the dynamic feels familiar but well handled.  Mortlake clearly wants Colby’s job, and his obvious displays of magic are designed to show the others that he is better suited to a role the non-magical Cobly has been elevated too.  Anyone with a passing familiarity with college politics will no doubt either wince or nod in amusement at the shenanigans on display

Artists and colorists Veronica and Andy Fish return to Blackwood with their trademark work.  Strong colors with a looser art style mark Blackwood #1, which helps add to the humour of the students activities, while also allowing for more creepier elements.  The night scenes by the river bank, as the students mourn Dennis, are particularly atmospheric, with blue and grey tones predominating.  The faculty members are slightly more cartoonish, as befits their general air of oddity.  Of particular note, early in the issue, is the way the appearance of a magical monster appears – it is well paced, as the smaller panels intercut between the students and Colby, and the stirring of something dark and blood born from the pages of a magical text.  It’s fun and creepy and tinged with a little dread, with an explosive denouement – all showing the skills and abilities of the characters.

Dorkin has written an entertaining opening issue in this return to Blackwood after the traumatic ending to the previous arc.  Each of the characters gets a chance to shine, and the mystery of what is happening and what Dean Ogden unleashed gradually moves to the forefront.  Reiko’s obsession with what happened to Dennis, and how to cure his condition, sets up nicely the rest of the story arc.

A strong return to Blackwood featuring amusing writing, some deft characterisation, and enough mystery and events to hook the reader into coming back to the next issue.