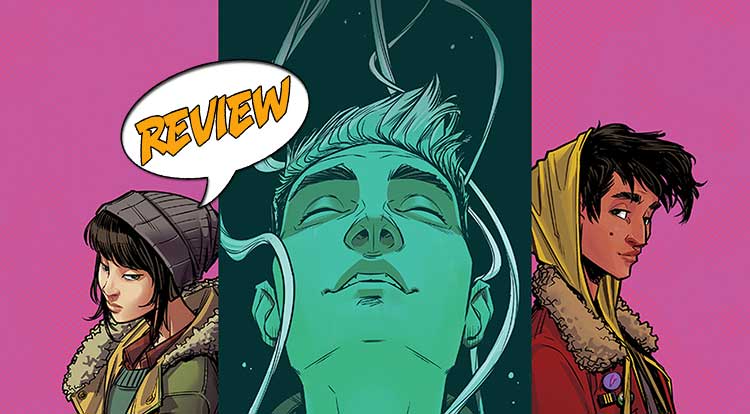 High school is what you make of it but face it – it can be tough. But what happens when Samuel, Samantha, and Samir find an unusual egg sac out in the woods? Find out in Alienated #1 from BOOM! Studios. Previously in Alienated: In a town called Tangletree, there are three high school age kids who could all go by the nickname of Sam. Three kids, different personalities, different aims in life. About the only thing they have in common is Leon – a bully, both unliked and unlikable. They have no idea that something is going to happen that changes all their lives.

THE GRUELING LIFE OF THE OUTSIDER

Alienated #1 opens with a masked person in a hoodie delivering a diatribe protesting school and urging his followers to take back the world. Samuel uploads his video and unmasks. He’s getting forty-three views a week on average, which is a start. Every revolutionary has to start somewhere. But in the meantime, this one needs to get to school. He’s the new kid in town, and so far the only kid who seems to have noticed him at all is the unlikeable Leon.

Next we meet Samantha who is focused on making it out of school, out of town, and off to college. She misses her bus and has to overcome her introversion to ask someone – Leon, who has a bike – to ask the bus driver to wait for her. Leon not only insults her, but he sends the bus on. That’s the thing with being cruel – you can do it in small ways too, small ways that add up over time.

And then there’s Samir. His survival strategy is being the nice kid, finding common ground, pretending to have common ground even when he really doesn’t. He can’t even be mean to Leon when he tries.

The three of them meet when they’re in the woods. Samuel is watching a vlogger called Waxy; Samir pretends to be a fan; Samantha turns out to be an actual fan. We get a strong sense of their world, which is not that far off from our own, with Waxy’s latest show as he pranks a fan’s biology teacher, called out for teaching biology with only a religious interpretation. It brings them momentarily together as they discover a strange thing up in the trees, something that looks like an egg or an egg sac. When Samuel touches it, they have a moment where they can all see into each other’s thoughts. Talk about TMI! They all run off in their own directions.

The story follows them through their school day as they put up with their classes (and classmates) and realize that they can still hear each other’s thoughts. The highly introverted Samantha has angry, even hostile thoughts. Samir is eternally optimistic, even about Leon. Samuel wants to change the world. They end up going back to the woods, back to the egg sac – and nothing is going to be the same again!

BRINGING THE THREADS TOGETHER

There’s a lot to keep track of in Alienated #1, especially once our main characters start being able to hear each other’s thoughts. The lettering works hard to keep us straight. I like the blending of thoughts and dialogue throughout the issue, but we need the lettering and the color used in that because with the three Sams being in different classes, it could otherwise get quite confusing.

I also like the expressions and particularly the body language of the characters. High school is an age when, if you’re one of the different kids, you try to keep a lot inside yourself. It still shows through, and that is depicted well in all the young people, including the pugnacious Leon. Plus it really pops when they come into contact with the egg sac and having the mind-blowing experience of sharing way too much of each others’ minds. There is a moment of stunned silence following by flight, just trying to get away from it all.

I think Alienated #1 is a strong beginning. It sets up the world we’re starting from, throws in the puzzle, and ends with a bang. I think a lot of readers may see some of themselves in one or another of the main characters. There seems to be a lot of potential for where things could go next, which keeps it interesting.

A mysterious encounter in the woods changes their lives in unexpected ways.