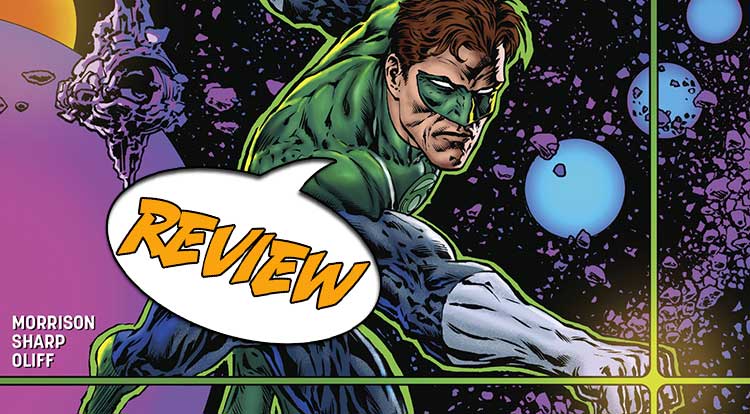 The time has come for a changing of the guard on Oa as the old Guardians leave to make room for a new group of blue baldies. The question is though, how will Hal Jordan take to his new bosses? Your Major Spoiler review of The Green Lantern: Season 2 #1 from DC Comics awaits! Previously in The Green Lantern: After a year long struggle against Controller Mu and his Blackstars, as well as a brief stint as a totalitarian ruler, Hal Jordan has come out victorious and has saved not only The Green Lantern Corps, but the universe as well.  Now it’s on to the next assignment for the earthman.

The Green Lantern: Season 2 #1 opens up in the middle of an awards celebration honoring Hal’s victory over The Blackstars. Hal is given an upgraded lantern to charge his ring and is sent away.  Later that night he is visited by The Guardians who inform him that they are leaving in order to fight in something called The Ultrawar which is part of something bigger called The Mult-Crisis.  They inform Hal that new guardians are needed and then depart. Later on, The Green Lantern Corps find themselves hosts to a symposium of galactic law enforcement agencies.  There Hal meets Rykaktoro of Karalyx aka Ryk, who is a living crystal.  Hal is called away by the one remaining guardian, along the way he has a nice chat with John Stewart and Jessica Cruz about why he doesn’t spend more time on Earth.  When he meets the guardian, she informs him he needs to go to Maltus to retrieve the young guardians and that Ryk is his new partner. The duo travel to the planet to find it under siege by genetically enhanced gorillas.  They fight off the gorillas and rescue Mother Juna who is a scientist employed by the guardians to create species and societies in order to study how they collapse.  She turns over the young guardians and they travel back to Oa.  There the young guardians make their first decree, a dangerous killer is on the loose, hiding on Earth and Hal has been assigned to find them.

A Lot To Take In

Being familiar with Season 1 of this series was a slow burn with a lot of moving parts, I was expecting a lot of story threads to be laid out here. But, I was not expecting just how much Morrison was going to pack into this issue.  From the hints of greater threats given by the old guardians, to Hal’s ring that can now shrink people and rewind evolution, to the young guardians who have emotions, to all the shenanigans that Mother Juma is up to, to this killer who is so dangerous that it warrants Hal being Earthbound until they’re found, there’s a lot going on here.  Having read plenty of Morrison’s work in the past, there’s no doubt that all these things will get their time as the series goes on, but they do leave this issue a bit of a jumbled mess. At times this issue comes across more as a blueprint rather than a cohesive story. Not to say there aren’t some good stuff going on here. Ryk is great and the interactions between him and Hal are the highlight here. Also, Mother Juma is a truly unsettling character who I hope we see more of. Finally, the way that Hal and Ryk manage to save the day is a fun series of events that plays off both of their characters well.

A Tale of Two Liams

Liam Sharpe is one of the most confounding artists out there.  On one hand his character work and faces are absolutely beautiful. They’re full of depth and detail, he even manages to make Ryk (who only has one unchanging expression) seem expressive and emotional. On the other hand, his penchant for packing every single background with as many objects and lines and flourish makes every page feel claustrophobic and distracting.

It’s a smart move on DC’s part to utilize the “season” moniker here, because it makes this issue easier to digest.  On its own this issue just feels packed to the brim with story threads and little details that make this a really difficult book to take on its own. But, when looking at it as just the first “episode” of a season turns this from incomprehensible to intriguing. Ultimately, The Green Lantern: Season 2 #1  relies on the reader’s faith in Grant Morrison and his ability to follow through with his grandiose intentions, which isn’t always a certainty. 3.5 out of 5 stars.

The Green Lantern: Season 2 #1 does not work well as a stand alone comic book. But, it does work well as a season premier. Liam Sharpe’s art is a mixed-bag that is at times stunning and at other times, busy and uncomfortable.