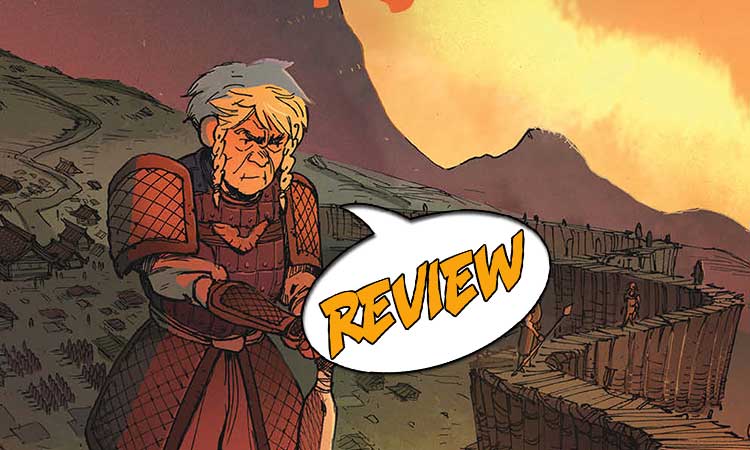 Hana is a fierce fighter, but this is the first time she’s has a serious battle with survivors. Are they only the enemy, or are they people who are worth saving? Find out in Ronin Island #10 from BOOM! Studios. Previously in Ronin Island: We learn that Hana, as a child, was skeptical of the Island’s professed ideals. While the community there talked about everyone being equal, her own experience was that she was treated as somehow less than the others. Elder Jin sees her unrest and talks to her, convincing her that she really does belong there. Cutting to the present day, Hana and Kenichi with their handful of survivors approach the Island, only to be denied landing. The Island has to keep its quarantine to avoid being infected. The refugees have no choice but to head back to the mainland. Once there, they are divided. Kenichi wants them to create their own new community. And Hana wants to take the fight back to the Shogun!

GROWING UP QUICKLY THROUGH BATTLE

Ronin Island #10 opens in the aftermath of a skirmish between Hana and Kenichi’s refugees and the Shogun’s men. Hana is stunned. She advised the soldiers not to fight them, so they wouldn’t have to die. Instead, they clung to their beliefs and now they’re dead. General Sato explains that this is part of what happens when you fight. Then Hana realizes there are still some survivors. She is still innocent enough that she wants to save them. She says that this will show them the meaning of the Island. Is that really it, or is this a way for her to put her own guilt to rest? She wasn’t expecting to have to fight and kill people – she thought the Shogun would send his Byōnin. Which he promptly does.

Now there’s really no time to save the survivors, but Hana still wants to try. And everyone is surprised when Elder Jin shows up with a small force of people on horseback. She came out to save them. The monster consumes a soldier, and Hana warns that it’s preparing to let loose its spores. Jin shows some quick thinking. She ties a cloth over her mouth and nose, orders her people to dismount, grabs all the horses and goes in. The horses turn into monsters and Jin disrupts the Shogun’s forces, with a little help from Hana.

But getting back to the Island is still not the respite Hana was expecting. They’ve taken the Shogun’s ship, but he and his men are still right across the strait. The people are still afraid to let anyone from the mainland enter the village. They’re distrustful of the soldiers they brought along, and of the refugees from the Shogun who came with them and fought with them. A close-knit community is a two-edged sword. And things don’t always settle down peacefully. This is not just a story about the obvious conflict between the people of the Island and the Shogun. Conflict between people happens at even very small levels. Maybe the entire concept of civilization involves learning how to consciously dampen the small conflicts in order to live together.

WHAT IS STRENGTH ACTUALLY?

While Ronin Island #10 doesn’t show us a lot of the fighting, what’s important to the story is the aftermath. The opening page where Hana has come to her senses after her big fight captures the moment when sanity comes rushing back after the momentary insanity of combat. And there are some lovely moments where panels contrast Hana’s and Kenichi’s attitudes. They’re together; they’re on the same side in all of this, yet each moment they have their own priorities.

It is so dramatic when Elder Jin shows up! I was not expecting this. We know she’s wise, and we know she knows about combat and tactics. But throughout she has always seemed like she’s past her last fight, passing the torch to the youth, helping them but putting the swords in their hands. I love to see her being so bold and so quick-thinking. But in coming to the mainland, has she given the Shogun too much information about the Island?

Ronin Island #10 is a study in contrasts. I am fascinated that successfully reaching the Island has ended up still not being the goal or the solution. Life is complicated, and this is a book that touches on several facets of this.

A fight may come to an end, but that doesn’t mean that the conflict does.