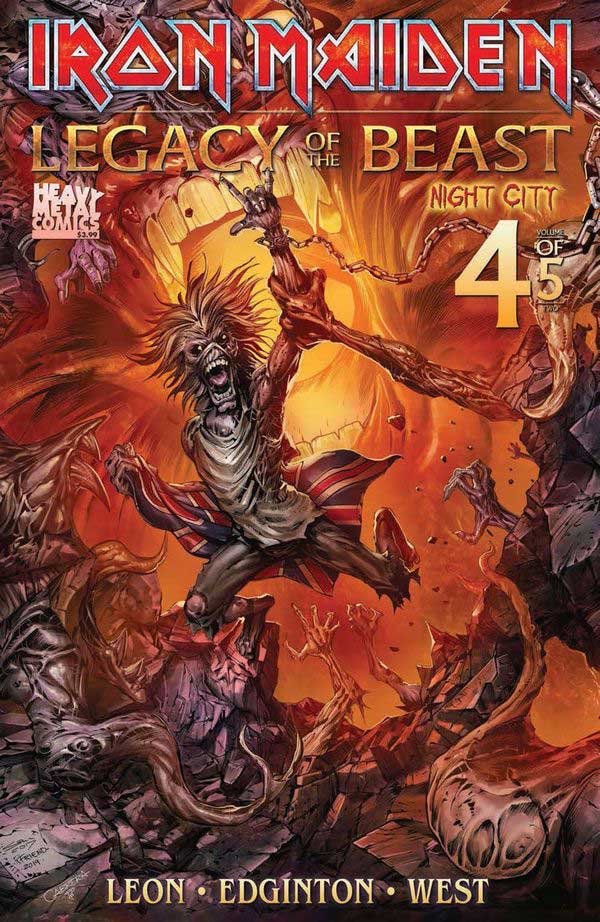 Iron Maiden Legacy of the Beast Vol.2 Night City #4 is available for pre-orders through Diamond Comics Distributors and anywhere comics are sold.

Welcome to Night City! In the aftermath of The Beast’s destruction, Eddie must ally with the mysterious Alchemist and embark on a journey to London’s East End… a once familiar stomping ground now under siege by meteoric shards of his fallen adversary. As the city warps into a twisted hellscape, a maniacal Killer stalks the streets with ever increasing power and depravity. And only the Mistress of Acacia Avenue knows where to find him…

Heavy Metal CEO Matt Medney says, “Heavy Metal is excited to continue the story of the beast in these final moments of the second installment volume.”

Iron Maiden Legacy of the Beast Vol.2 Night City is the continuation of the Legacy of the Beast storyline. In this series Iron Maiden’s Eddie once again battles evil in a city of eternal night, but he can’t do it alone. Teaming up with edgy rocker, Charlotte, together they will fight an all powerful force threatening the world and maybe even the fabric of the universe.

Pre-orders should be placed with local comic stores on or before Feb. 19th, 2020.