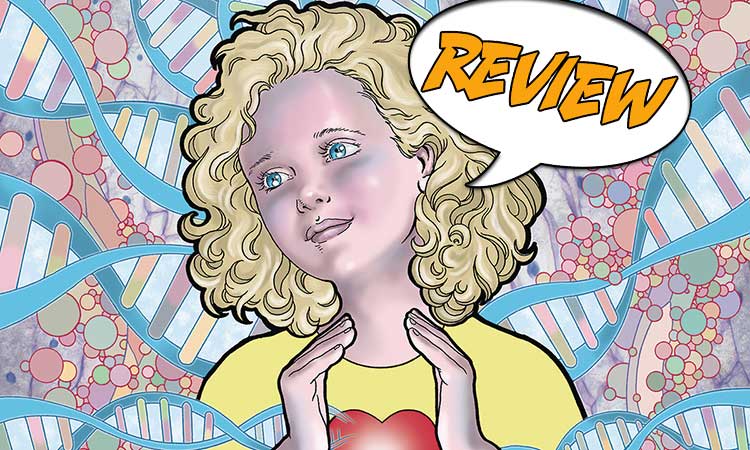 Jack Davidson throws himself into his work trying to work out why there are aggressive cancer outbreaks. An anonymous note and a careful double-check lead…to what new puzzle? Find out in The Clock #2 from Top Cow! Previously in The Clock: There is a new medical threat in the world – a new form of highly aggressive cancer that is killing millions. Jack Davidson and his wife Evee are researchers who are researching the disease, and no distance is too far to travel to try to uncover any clue to the cancer or those who may have some resistance to it. While Jack is on one of these trips, Evee succumbs to the cancer herself, and now he’s trying to keep up with his work and care for their daughter, Kimmie. Then one day, after testifying at length before a Senate committee, a stranger bumps into him and drops an anonymous note that declares his wife was murdered.

The Clock #2 is a medical thriller, but we’re seeing it from a deeply personal point of view. Jack’s grief is ever present, welling up at times despite his efforts to keep it at bay. His friends and colleagues encourage him to take a little time off and spend it with his daughter. But he just received an anonymous note intimating that his wife was murdered. He goes to the police with the note and explains things to them. They check with his wife’s oncologist and verify that she died of lung cancer. They suggest maybe someone was pranking him, but they keep the note.

Then Jack visits the oncologist. He requests tissue samples from his wife for his present work. Is this ethical? (Medical ethics are a constant point of tension in this book.) The doctor agrees, but after Jack leaves, he phones someone.

At home, Jacks’s father Joe stops by, and Jack recounts his day. There’s also a very touching scene when he puts Kimmie to bed, trying to help her with her own questions about her mother’s death. This sets off Jack’s grief. He goes out for a late-night run, and a car revs its engine and comes after him. He avoids it by running through a narrow alley way and is almost hit by a neighbor’s car.

The following day he is back in the lab working with his assistant. He’s tired enough to fall asleep on the floor for a while. His wife’s tissue samples arrive and look like all the other samples they’ve examined. He thinks about the cancer even as he gets ready to go home and take Kimmie to visit Evee’s grave, calling back to the lab when he has another idea. He’s sending some of his wife’s things to the lab to run a baseline comparison on her DNA. Along the way, we’ve seen some hints that he’s being watched, but now we see it for sure. His phone has been tapped and people are listening in, and they want to take out his assistant.

At the cemetery Jack gets the call – the samples he sent over do not match her cancer samples. Those came from a different person. And then the assistant screens and is but off abruptly. At the same time, Kimmie is not feeling well. As Jack looks incredulously at his phone, the little girl collapses in his arms. This is powerfully dramatic, and it’s terrifying because suddenly we don’t know who can be trusted.

The art of The Clock #2 is out of this world. Colleen Doran captures Jack’s suffering and his intense determination so well it is almost painful to look at. And it’s a huge contrast from the other people around him. The police view him politely, but skeptically. Friends and associates offer to help, but awkwardly don’t know exactly what to say or to do around him.

The pages where Jack’s grief is fully on display are powerful. He runs as though he is trying to run away from himself. When the car comes after him, blinding him with its headlights, grief spills into disbelief before turning into sheer terror. After he returns him, his grief has become ineffable. Jack is curled up on his bed with photographs and mementos scattered about him. In a few short pages we see how much he has lost. His work was always important; now it has become personal.

The Clock #2 is already a race against time, but now the story is getting deeper. What if the origin of the cancer-triggering virus wasn’t natural, but man-made? Who would so such a thing, and why?

In his grief, Jack throws himself into his work only to find things that don’t make any sense.