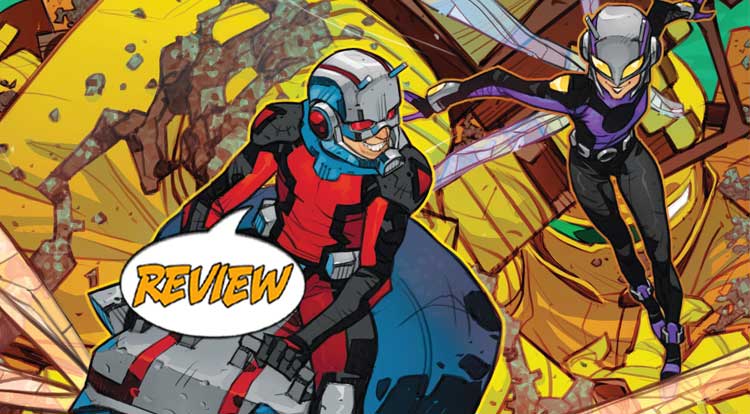 Things are looking up for Ant-Man!  But then again, he IS only four inches tall…  Your Major Spoilers review of Ant-Man #1 from Marvel Comics awaits! Previously in Ant-Man:  Scott Lang is back and doing better than ever!  Er, at least according to him, but his daughter, Stinger, and the anthill he’s living in say otherwise.  Desperate to raise his daughter’s opinion of him, Scott takes a job from local beekeepers only to uncover a global conspiracy that could topple the world order!  No time to call the Avengers, this sounds like a job for – ANT-MAN!

Things have not been going well for Scott Lang.  Having moved to Florida to be closer to his daughter Cassie (aka his partner, the mighty Stinger), Scott has lost his job and his apartment, forcing him to live in an anthill in a stranger’s yard.  As this issue opens, though, he’s tracking down an AIM operation in the Everglades that’s trying to “weaponize addiction” against the masses for profit.  It’s a successful bust, though a little bit awkward, as his daughter throws an F-bomb, leading to an argument about appropriateness that feels really condescending from Scott.  Cassie, for her part, is both an experienced hero and a teenager, leading to exasperation.  When a woman arrives to offer him a paying gig soon after, Cassie refuses to go along, leaving Scott to cross the state and investigate missing bees all his own.  What he finds is Swarm, the freaky former N*zi made of bees, who has been calling hive after hive to bolster his own power.  Ant-Man convinves the bees to fight for him, quickly overwhelming Swarm and depleting his stash of insects, only to find that he was never the REAL threat at all…

There’s a lot to like in this issue, from Ant-Man and Stinger effortlessly going giant to Scott’s displeasure at having to take such a paltry job after saving the universe with the Guardians of the Galaxy and stopping an Asgardian war, but there’s a lot of energy expended on underlining just what a burnout loser Ant-Man has become, and it feels like it tries too hard.  The battle with Swarm shows him to be capable, if self-effacing, and most of the heroic moments here work just fine, in spite of the hammering on just how lame our hero is.  I like Dylan Burnett’s take on the costumes and helmets of the insectoid duo, but his facial expressions are all remarkably over-exaggerated and cartoony, which serves as a visual version of the story concerns: There’s a disbalance between depictions of Ant-Man and Scott Lang.  I’m sure it was intentional, to try and contrast the two sides of his life, but like the over-focus on loserhood (one of his ants tells him that she’s sorry that she vouched for him to get him room to stay in the hive) it plays a little too broad.

BOTTOM LINE: NOT BAD, BUT A LITTLE OFF-PUTTING

All in all, Ant-Man #1 has some clever story moments and an interesting (you should excuse the expression) antagonist, but there are some execution problems that overpower the good parts a little, leaving this debut issue with a still-better-than-average 3 out of 5 stars overall.  As first chapters go, it’s a little underwhelming, but the final page reveal makes me think that the remaining four issues have interesting places to go, so I’ll be watching out for #2 in a few weeks.

I'm not sure I like Scott being THIS much of a jerk, but it's a charming issue with some not bad art and a surprise ending... Not bad.