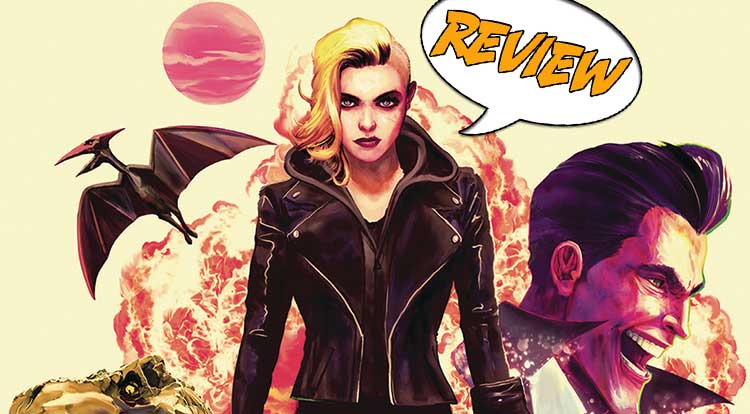 A simple offer: Win the race, get a chance to restart your life.  But none of the participants could possibly imagine just what kind of race they signed up for.  Your Major Spoilers review of Backtrack #1 from Oni Press awaits. Previously in Backtrack: Guilt weighs heavy on former criminal “wheelman,” Alyson, who led an illicit life that left her shattered into pieces. But when she hears about a massive cross-history car race that grants the winner a chance to correct a single mistake in their life

A Cannonball Run Unlike Anything Ever Seen

Backtrack #1 starts up with Alyson Levy waking up from a drunken stupor still in a bar.  She makes her way out, only to find herself right back there the next night. This night though, she’s approached by a man who has an offer for her.  Compete in a race, win it, and she’ll have the opportunity to fix the mistakes she’s made.  Allyson is skeptical at first, until the man, Quellex, shows her a video of a man having the time of his life in Asia.  This elicits a response and she agrees to the race.  The next day she shows up to the qualifiers and easily gets a spot in the official race.  Before the day of the race we see a quick scene of some of the other competitors where they discuss their equipment and someone ends up dead.  The day of the race arrives and the competitors learn that their finish line is only 31 miles away.  The race begins and immediately things start acting strange and before she realizes it Allyson finds herself in the middle of a jungle with the other racers.  Before anyone can figure out what is going on, a t-rex appears and munches on one of the racers.  This sends the rest scattering.  Two other racers meet their demise due to hungry dinos, but the others manage to make it to a checkpoint where they are apparently safe.  The racers attempt to piece together what has happened when they are joined by another person who informs them that their race is actually through time and that he knows this because he’s done before.

A Fun Twist On A Familiar Premise

The setup of a long cross country race with a large ensemble cast of characters isn’t new.  But, I can’t remember ever seeing one of those with a time travel element thrown in and that piques my interest.  As for Backtrack #1 itself, it’s standard crime book dialog and elements.  An ex-criminal with a dark past and a drinking issue, a smarmy guy with a job offer, and a bunch of cannon fodder without much personality themselves.  This book really seems to be relying on the originality of the premise  rather than anything unique with the characters themselves.

The artwork in Backtrack #1 is solid.  The cars look fast and powerful and the dinosaurs look intimidating.  The aspect that stuck out to me the most though was the facial expressions.  It’s not hard to look at Allyson and Quexell and know exactly what kind of character they are by the little details and the ways the artist stretches realism in controlled ways.

Bottom Line: Worth A Look

Crime books are a dime a dozen and it’s not often that readers get a chance to see a good twist on the familiar formulas.  Backtrack #1 manages to break that trend and introduce a fun element that shakes up the usual output in the genre. While the premise is original, unfortunately some of the other aspects of Backtrack #1 aren’t.  In particular, the characters don’t feel very original and if the reader is familiar with crime books they won’t be surprised by that. 3 out 5 stars

Backtrack #1 is a decent read that manages to introduce a nice twist to a familiar setup. Also, the artwork does a good job silently setting up character traits, even if they aren’t very original or fun.