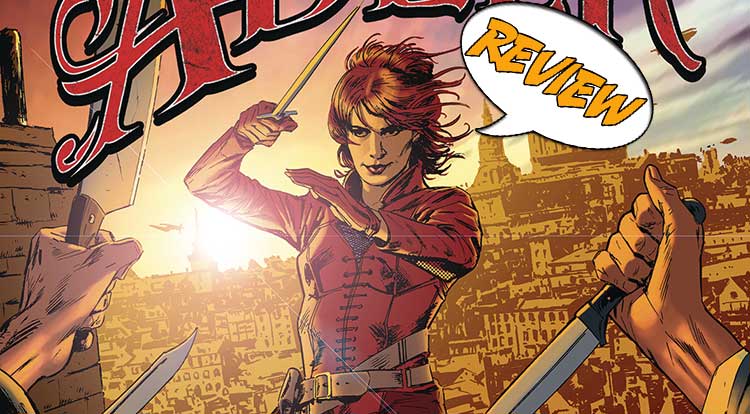 Sherlock Holmes is away in Dartmoor, but if Professor Moriarty is up to his old tricks, Irene Adler has her eye on him. Check out the first moves in their game of cat and mouse in Adler #1 from Titan Comics! Previously in Adler #1: It is the early 1900’s and Professor Moriarty is out to cause trouble. “To Sherlock Holmes she is always the woman.” That one simple sentence tells you a lot about Irene Adler who, with a formidable crew of women from literature and history, is going to take him on.

A TEAM OF EXTRAORDINARY WOMEN

If I have a bone to pick with Adler #1, it’s taking women from nineteenth century literature, sometimes out of their own time and turning them into nearly completely different women. That’s because I got my degree in English and have read a lot of nineteenth century literature in my time. However, I can get over it and accept the characters as sharing a name and maybe a personality quirk or two, because I love an adventure packed with interesting female characters.

The story strongly parallels Sherlock Holmes. It opens with Jane (Eyre) as a nurse and ambulance driver in the Boer War. She returns to London with an injury (a small scar near her eye), with only modest means, in search of somewhere to live. Her friend, Lady Havisham (eccentric, but not so mad as the original so far) knows of someone else who is looking for someone to share lodgings. That someone is Irene Adler, whom they meet as she beats up a thug who was sent after her. Irene proceeds to deduce a lot of information about Jane in Holmesian fashion, and of course they become lodgers together.

The thug runs away but is dragged off to the Professor (Moriarty) who is displeased with his failure and kills him. Moriarty then heads out to dinner. Apparently, Adler is willing to meet with him (we do see that she knows exactly who he is), and Sherlock Holmes is safely out of the way dealing with the Hound of the Baskervilles. Meanwhile, a pale young woman with dark hair spies on him. She turns out to be Carmilla, an assassin, and she reports back to Ayesha, the Queen of the Amazons. (The beginning of the book has a very helpful page showing the main characters.) Adler has some important papers that Moriarty wants, and others are watching out for. Shades of a Scandal in Bohemia, perhaps?

This feels sort of like the League of Extraordinary Gentlemen, which is a fun concept, but with more women, which makes it more interesting. I’d classify it, so far, as a pulp adventure with a rather steampunk aesthetic.

The art style of Adler #1 is strong-lined and doesn’t let you forget this is a comic book. I’m not saying it’s at all bad; it isn’t. But everything looks a bit larger than life and not quite realistic. I like the faces; they’re quite expressive. There’s a lot of play with the eyes. These are all quite large, maybe not to a manga extent, but certainly much larger than is anatomically typical. And not just the women have them.

All the ladies are pretty enough. Another quirk about then – they all seem to have slightly disheveled hair. It makes sense in some situations, such as Irene beating up the thug, or Jane in combat. Or Lady Havisham in general. But even when they’re trying to be more formal, or are in polite company, they have messy hair. It just seems funny with the quasi-late Victorian fashion. Otherwise, their dresses are cute and would be fun to cosplay.

BOTTOM LINE: A DECENT TAKE ON THE HOLMESIAN TROPE

Overall, while somewhat derivative, Adler #1 is setting up with an interesting batch of characters and looks to be putting together some intrigue and mystery. It’s fairly pretty to look at, and it’s not a bad start to an adventure yarn.

Who has the important papers, and who will end up with them?