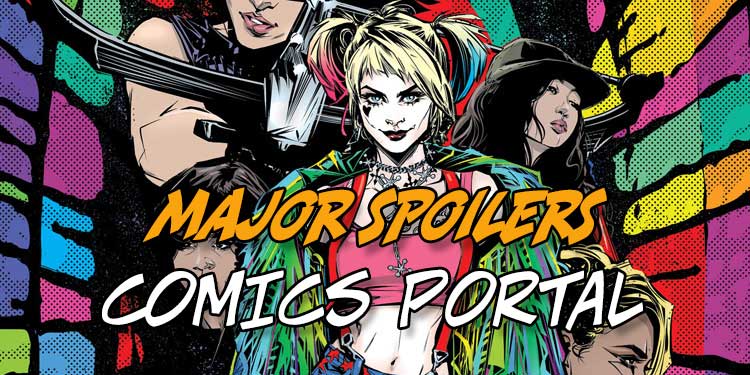 Something I have long hoped for is actually happening! Comic books are coming to a theater near you—at least the Regal Cinemas and Landmark Cinemas showing Birds of Prey (and the Fantabulous Emancipation of One Harley Quinn)! Let’s get to the comics part first, as reported by Bleeding Cool:

“Regal will distribute 75,000 Birds of Prey special edition comics featuring a reprint of Harley Quinn #1 (2016), with a cover illustration by Joelle Jones depicting the movie versions of Harley Quinn and the Birds of Prey. Moviegoers will receive the comic as a gift with each ticket purchase. The Birds of Prey special edition comic will include ads for both current releases and backlist titles to drive fans into comic shops for more.”

Yes! This is what I’ve been advocating for a long time now! When it comes to comics-related films, there out to be a comic-book presence in the theater showing those movies! I mean, it only makes sense! If you go to see one of these motion pictures, you might have at least SOME interest in comics and comic-book characters! You just could discover or want to return to a local comics shop if you read something that appeals to you!

I wish I could take credit for it, but it’s so obvious that I’m sure many others have wanted this kind of thing to happen!

I do have some reservations about giving out that many of them for free, though. We have to be honest here—comics don’t necessarily appeal to the majority of theatergoers. I fear that a lot of these freebies might end up in the nearby trash can. Of course, that just might make them collectible, you know! Ones found in great condition might appeal to the collectors among us!

What particularly makes me happy is the inclusion of ads! Again, you see something that tickles your fancy, you might want to get some of that stuff!

I only regret that there isn’t a way to promote the nearest LCS to the theater. I just hope one of those ads is for the comic shop locator. Maybe let stores insert a flyer into each issue? Really!

What’s interesting is that Warner Bros. offered an in-cinema giveaway before. It was for The Matrix, and the comic featured stories by Neil Gaiman and Geof Darrow. However, it also contained what were described as “rude words” and bare bottoms in it, so many theaters wouldn’t release them. Boy, did collectors love those when they could find them!

BUT THAT’S NOT ALL!

Even after you take your seat in the theater, you will also be checking out comics!

Turns out there will also be a 15-second commercial for another Harley comic, this one being the Harley Quinn: Breaking Glass graphic novel from Mariko Tamaki and Steve Pugh (a book I highly endorse, by the way).

The trailer will offer fans the chance to win their very own Harley mallet… you know, the one she carries around in the movie as well as in the comics.

For fans in Canada, you have to go to this link and buy your ticket to see the movie at a local Landmark Cinema. Once you do that, you’ll get a digital code that you redeem through the dccomics.com website for a free digital DC comic. Directions on how to do this are there on the Landmark Cinemas link above. Granted, there doesn’t look like there will be physical copies of comics there, but you could read it on your device while waiting for the motion picture to begin, so it would be the next best thing!

THIS COULD BE THE FUTURE Honestly, if this goes over well, we just might see more of this kind of thing in the months and years ahead. But it has to be successful, of course!

I would LOVE to see future comic-book movies be accompanied with this kind of promotional push. I think fans could really enjoy it, and we might help the industry, too!

This was a good film to choose to promote in this way, I believe. Harley fans are really devoted, and the character has a growing fan base ever since her debut way back in Batman: The Animated Series. Doesn’t seem to matter what costume she’s wearing, either! Thank you, Bruce Timm and Paul Dini, for making her happen!

I could easily see the next Captain Marvel movie get this treatment. Marvel, it’s you I’m talking to here! If this is a winner, don’t let the fact that DC did it prevent you from doing it as well.

However, if it doesn’t work, we can always go back to the old way of promoting movies, but it just doesn’t have the same excitement to it! I still think DC should run ads during the superhero shows on The CW! And Marvel should do the same during Agents of S.H.I.E.L.D. on ABC or wherever their characters appear on the small screen!

So, I’ll be after this film and the goodies associated with it! If you love comics, I hope you will be as well!

Birds of Prey (and the Fantabulous Emancipation of One Harley Quinn) debuts in theaters this Friday, February 7!

What do you think? Will this be a successful way to promote the movie? Should we see more of this accompanying movies in the future? Are there some comics-related films that this promotion should not be done with? Please be sure to share your thoughts below!