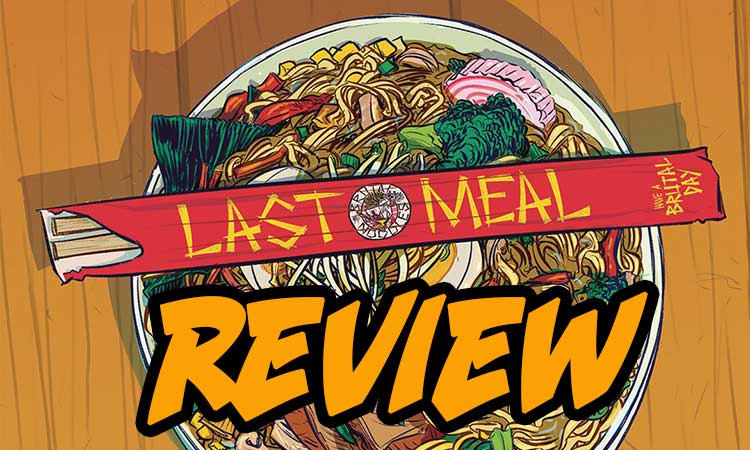 Can Amanda get her crew and the survivors out of Earth’s atmosphere? Are they any closer to finding out what the Sword of God is planning? Find out in The Weatherman (Vol. 2, #6) from Image Comics! Previously in The Weatherman: Nothing has been going as expected. Dr. Nyseth is dead. In the attempt to find Ian Black’s memory drive, the crew of the Disco Queen was caught. There is a Biophagus construct that looks just like Nathan Bright. It’s feeding time, to placate the Biophagus, and the crew of the Disco Queen are on the menu. The President makes her decision to destroy Earth in order to kill the Biophagus. Then the real Nathan makes his way to the Disco Queen, causes a distraction, and rescues everyone. A saboteur blows up the shuttle, depriving the Biophagus of its meal, and making it angry enough to attack.

As The Weatherman Vol. 2 #6 opens, Amanda is in the skies above Earth, pensively looking around. Nathan arrives in a party hat and with cake, which White Light apparently made. For Amanda. Whom she hates. Nathan Bright is a force of chaos, and Amanda is pissed to find him being so frivolous while they’re stuck on a quarantined Earth with no way off. This is the moment he pulls out Ian Black’s memory drive. He found it before Kestrel’s troops could, and he’s been hanging onto it and thinking, and has decided to risk dying to have Black’s memories restored.

There’s an amusing interlude where, on their way to the quarantine zone, they run past the same guard ship the met on the way in. As they reach the quarantine zone, the President contacts them to talk to Amanda. Amanda tries to get an agreement to let them, and the small group of survivors they rescued, back to Mars. They have a zero-tolerance policy for people who have been exposed to the virus. There is, however, an experimental (and painful, and very expensive) scan that could look for the virus at the molecular level, and Amanda is able to bargain for her crew only.

Nathan is taken in for his procedure. The doctor they ran into and rescued from Earth is to perform it. He, of course, is still suffering after-effects of the scan. (Nathan, naturally, is not affected and even had a big lunch.) There’s yet another wrench in the works – a bullet lodged in the memory drive. The President’s security advisor suggests sending Nathan in, pretending to be Black, to infiltrate the Sword of God. To top things off, the Sword of God broadcasts a countdown clock showing less than ten days.

Their modern tech has some pretty impressive, if rough, techniques and implants for changing his mind and memory, not to mention implanting an organic transmitter so they’ll be able to see and hear everything he does. And a week later, he is in and infiltrating, and killing people, when Dr. Argus has finally decoded the memory drive, and discovered something utterly chilling.

The Weatherman Vol. 2 #6 flings us from peace to zaniness, makes a hard turn into pathos, and cranks up the crisis level. Our main characters quite rightfully look exhausted, and then ill, after their molecular scan. Facial expressions are powerfully big, but it’s the body language that really sells us on the whiplash we go through. Amanda is trying so hard to keep on an even keel, to stay in control, and Nathan’s willingness to make the ultimate sacrifice throws her for a loop.

I love the futurism with touches of a normalcy that looks familiar to us. The President meets with Amanda virtually, using a projection which is semi-transparent. Nathan’s presumably last meal is in a Brutal Noodles shop, which turns out to be a projection in his cell – it pixelates and fades as he is taken away for his procedure. And all those medical procedures – they bear a frightening resemblance to the Pearl’s torture devices.

BOTTOM LINE: WHEN YOU THINK THINGS COULDN’T GET WORSE

Things are moving fast in The Weatherman Vol. 2 #6, and we’re on a short timeline until the end, which is going to be in another volume. It’s a good, suspenseful story that forces its characters to keep making difficult decisions which have major consequences, and it has a heck of a cliffhanger.