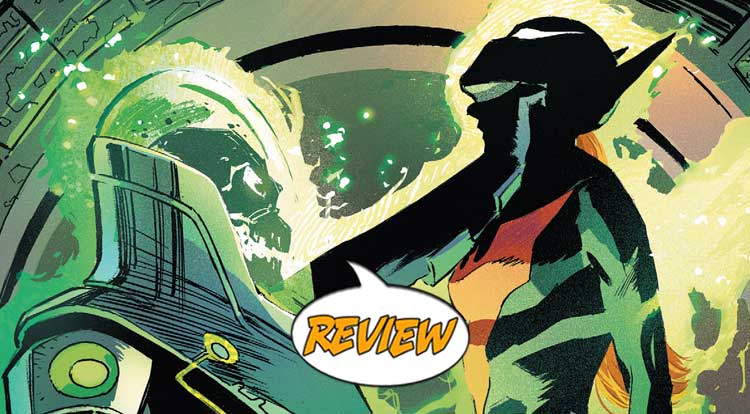 Batwoman’s secret is out…  but will she survive the fight with Blight?  Your Major Spoilers review of Batman Beyond #40 from DC Comics awaits! Previously in Batman Beyond:  Batwoman is doing her best to find Blight, but time is running out.  The evil villain is looking to take Terry’s body for good, which would give him a whole new lease on his criminal life.  And rather than wait for Batwoman to come to him, Blight takes the fight to her!

THE BATMAN IS MISSING

Thanks to a clash with False-Face, Terry “Batman” McGinnis is missing, wandering the streets of Neo-Gotham without his memory and with no idea that he’s secretly a hero. That makes it doubly disturbing when he winds up in the lair of radioactive villain Blight as this issue opens, about to become a pawn in Blight’s plan to, and I quote, “watch the world burn.” Part of that involves an attack on Wayne Manor, where Bruce Wayne has assembled Barbara Gordon and Melanie Walker (the former Ten of the Royal Flush Gang) to accuse them of being the new vigilante Batwoman. That all falls apart when she arrives to fight off Blight’s crew, only to have another costumed type appear for the assist. Bruce is happy to see the newcomer, Dick Grayson, but his presence causes Batwoman to make a run for it as soon as the bad guys are cleared away…

…because she isn’t ready to face her father just yet.

I DIDN’T REALIZE THERE *WAS* A BATMAN BEYOND BOOK

Upon seeing this issue in the solicitations, I was surprised, not just that Terry has his own title again, but that it’s reached 40 issues, but reading this issue makes it clear why: This is good stuff. Jurgens script balances the twists and turns of a 30-minute cartoon with the necessary Bat-shenanigans well, and even though a couple of characters don’t get introduced in these pages (I’m presuming the kid we see with Batman is a new would-be Robin, but I have no idea who he is), the story proceeds in a clear and interesting manner. Chen and Parsons deliver on the art side as well, especially on the visual of Batwoman’s uniform, keeping the stark black-and-red of the animated costume with some excellent detail and really great action sequences. Blight’s glowing skull is also a really impressive effect, making me hope that we get to see Batowman kick it a few times before Terry returns to action.

Though I’m not one of the hardcore fans of this property, Batman Beyond #40 delivered on everything I needed to enjoy this issue, from clear storytelling to exciting action to just enough dialogue to make it clear what’s going on without bogging things down, earning 4 out of 5 stars overall. It’s impressive that I not only didn’t mind that this book didn’t have any Batman, but I want to see more of Batwoman even once he’s returns.

It's remarkable enough that I was quickly engrossed in this book without having read previous issues, but I didn't even mind the lack of the title character. More Batwoman Beyond, please!