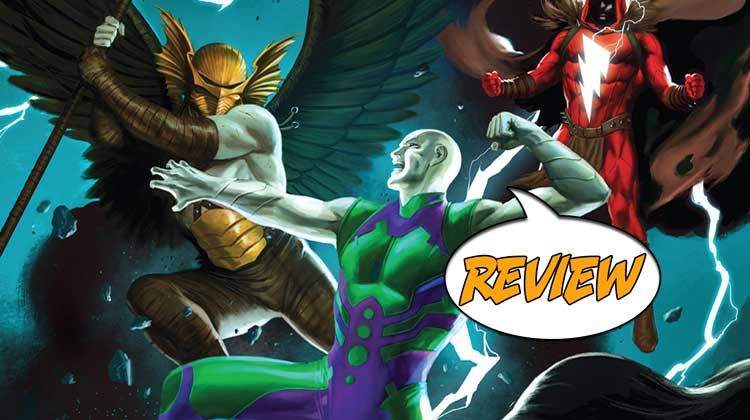 Year of the Villain: Hell Arisen #2 of 4 Review

Year of the Villain: Hell Arisen #2 continues the big event that began in 2019, and this latest issue pits Lex Luthor against heroes corrupted by the Batman Who Laughs, including some surprises. Check out our review of the issue from DC Comics. YEAR OF THE VILLAIN: HELL ARISEN #2

SOLICITATION: Apex predator Lex Luthor is on the hunt for the Batman Who Laughs. To catch his prey, he must follow a trail of broken heroes… leading him to Jim Gordon, one of the victims of the Batman Who Laughs’ deadly virus that turned the heroic police commissioner into the worst version of himself. The trail leads Lex to a lonely cell in the Hall of Justice – but it’s not the good guys who come to stop him. It’s more of the Batman Who Laughs’ dangerous operatives! And if they couldn’t resist the influence of the Dark Multiverse, then how can Lex?

The Batman Who Laughs continues to build his status in the DCU. He’s becoming one of the biggest baddies to come along there in a long time. He’s infected what has been called The Secret Six, including Hawkman, Donna Troy, Blue Beetle, Jim Gordon, Supergirl, and Shazam!, and it’s their turn to try to take down Lex Luthor.

While the villains are using heroes to attack one another, it’s interesting to note that Lex himself has gotten an upgrade, and that includes some Martian physiology, which comes in handy in this issue.

But the Batman Who Laughs seems to always be at least a step or two ahead of Lex, which is truly saying something since Luthor is quite the master strategist. He gets the drop on Lex as this issue concludes, leading into the next chapter.

I have to say that it’s tough to watch many heroes I like twisted this way. There’s a particularly gripping sequence where Supergirl talks to Luthor about how he’s never been smaller than he is now, letting a comic goddess manipulate him. She makes a great point there, and it gives Lex pause… before he drops a building on the Secret Six.

It’s also interesting to see Mercy, who has helped Luthor in the past, continue to be of use to Lex even in his enhanced state. The last page shows that the best (or worst) is yet to come as he recruits help from a fascinating source. I won’t spoil it here, but Lex is fighting fire with fire, so to speak.

I honestly don’t know who to cheer for in this conflict. Lex is a perennial bad guy, and the Batman Who Laughs is new, but quite formidable. It seems that whoever wins, the rest of the DCU loses.

Tynion’s scripting is his usual quick pace laden with surprises. I mean, he sees the layers of meaning in this conflict I hadn’t even begun considering. And his grasp of the characters is top notch, even when they’re in their current “evil” state.

Given the dark elements in this story, the art does a great job of reflecting them. Almost everything takes place in the shadows or the night, which can be quite a challenge to an artist to portray in a way that we can tell who is doing what to whom. The team of artists really is making this tale live and breathe.

The facial expressions of the various characters were clear and easy to understand, and that was great considering the wide variety of them appearing in this book. I also found the action sequences high-octane, and again we can tell what’s happening even in the dark surroundings. Nicely done!

This has been one of those great events on several levels, including the fact that nothing has really been resolved in any way… yet. I’m not at all certain how this will all shake out when it comes to the “heroes,” but I do hope Hawkman returns in the coming months. I miss the Winged Wonder!

So, I’m anxiously awaiting the next chapter, which can’t come soon enough for me!