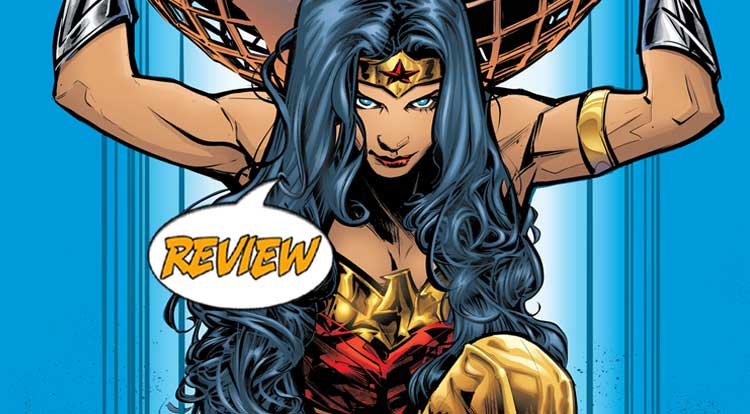 It’s a big anniversary for the Amazing Amazon and another new beginning for DC! Your Major Spoilers review of Wonder Woman #750 from DC Comics awaits! Previously in Wonder Woman: Created as an intentional example of a feminist hero back in 1941, Wonder Woman has long been the highest-profile female character in comics and one of the most iconic heroes of all. Though much has changed over the years, she has (almost) always been an Amazon ambassador to ‘Man’s World’, sent on a mission of peace and unity, but not afraid to take up arms when necessary. “We have a saying, my people. Don’t kill if you can wound, don’t wound if you can subdue, don’t subdue if you can pacify, and don’t raise your hand at all until you’ve first extended it” is her creed, and we’re coming up fast on her 80th anniversary.

We open in mid-battle, what I presume is a continuation of Wonder Woman’s ongoing, as Cheetah faces the goddess Hera herself, with Wonder Woman caught in the middle. With a little help from The Silencer, Wonder Woman is able to not only overcome the villain and reclaim her tiara, she finds the wherewithal to tell off her would-be patron and send Hera packing. Then, of course, things get complicated. We then get the triumphant return of Star-Blossom, the tween superhero from the 75th anniversary special, giving us a sweet, relatable Wonder Woman as big sister story, followed in quick succession by a tense confrontation with Ares, God of War. Then, Circe appears in a tale set somewhere down the road, dealing with the resolution of the Cheetah story, one that doesn’t actually appear in this issue, followed by a tale of young Diana on Themiscyra, a return visit to Themiscyra by a grown Wonder Woman, a tale the Bombshells Wonder Woman on an alternate Earth, and a lovely story about redemption featuring Silver Swan. The issue ends with the first story of the new DC 5G universe, as Wonder Woman arrives in Man’s World in 1939, just in time to end an attempt on the life of President Franklin Roosevelt, heralding a new and/or old heroic age.

SORT OF LACKING A CENTRAL THESIS

It’s always difficult to comprehensively review a book of this size, especially one that’s anthologized to this degree, but this comic book is ALL OVER the place. There are some real standouts in the stories: I loved the Star-Blossom tale, where the younger hero got to provide support for her mentor and Hippolyta had dinner with Peony McGill’s mother and father, the final story promises something interesting with Wonder Woman as the first hero of a new iteration of continuity, and I really loved the art on the Circe chapter. In fact, the art throughout the issue is just plain beautiful, without a visual clunker to be had, even with mismatching styles (the Rossmo and Hester/Parks chapters are very distinctive and stand out.) Each story likewise gives an interesting angle on a different aspect of a very complex character, showing her as hero, goddess, warrior, big sister and friend and all feeling authentic and compelling. Yet somehow, the combined assembly isn’t quite as successful as it could have been. Putting two Themiscyra stories back-to-back in different eras feels like mistake, as does the decision to open with a Cheetah story, do three other tales, then return to Cheetah in the future. Would it have worked better with those tales back-to-back? I don’t know, but the overall feel of the issue as assembled is less than the sum of its’ parts.

BOTTOM LINE: HARD TO GET PAST THE PRICE POINT

With 96 pages of content, you’re getting more than four issues worth of Wonder Woman for the price of 2.5, but it’s still hard for me to say that I’m happy to spend ten dollars on a single issue. That said, Wonder Woman #750 has a lot of talented creators shining lights on some side of Wonder Woman that haven’t been in focus in recent months (and more Star-Blossom!), featuring a lot of gorgeous art that helps to offset some editorial/curation problems, earning 4 out of 5 stars overall. I fell away from Diana’s monthly book when the focus started being all about her long-lost brother, but I think I’m going to check out her monthly book again and see if this level of quality continues.

It's a little expensive and the curation caused some issues for me as a reader, but there's a lot of interesting, compelling Wonder Woman here, and the 5G teaser story has me more interested than anything so far.