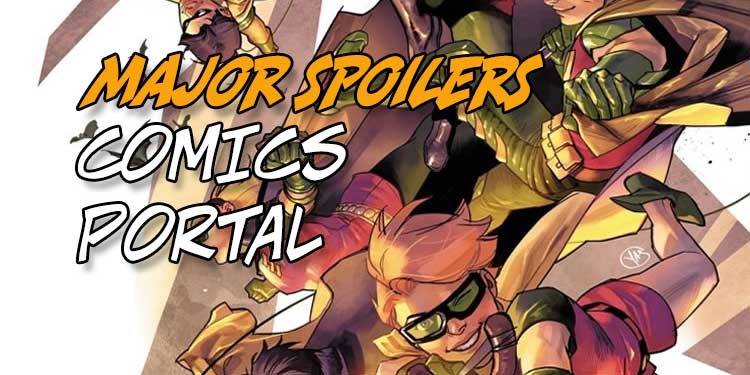 COMICS PORTAL: Which Robin IS Robin?

As has been reported here at MajorSpoilers.com, DC is gearing up for an 80th anniversary celebration for Robin in March, 2020. However, there’s quite a controversy going on in several online forums about just who this event should really be about! What has ruffled some feathers among Robin fans (sorry, couldn’t help that pun) comes from this paragraph in a recent news release:

“From the high-flying adventures of Dick Grayson to the tragedy of Jason Todd, the enthusiasm of Tim Drake and the arrogance of Damian Wayne, the persistence of Stephanie Brown and the rebelliousness of Carrie Kelley, the mantle of Robin has been worn by many, but always represents one thing: a hero.”

Here’s the concern that some are voicing: When Batman’s 80th anniversary was held, it was almost entirely (if not all) about Bruce Wayne. We’ve had other Supermen besides Clark Kent over the years, but his event focused on the guy with the glasses. Other heroes have also been held up for recognition, and they almost always focus on the first person in the costume.

Obviously, that’s not going to be the case with Robin. While Dick Grayson was the first and is probably still considered the only Robin to many, particularly those who don’t read the comics or watch Batman ’66, there have been others along the way, and each has in some way contributed to what can be considered the “legend” of Robin. One way to resolve this problem is to give Dick his own celebration. You could include his various identities, including the Boy Wonder, Batman himself, and Nightwing (although that memory loss thing is quite something to overcome and/or explain to people who don’t read that comic).

I mean, Burt Ward recently got his own, well-deserved star on the Hollywood Walk of Fame. You ask many people, and he’s Dick Grayson in the flesh to them. He’s voiced Robin in animated shows and movies, for instance.

The trouble is, you have GOT to include Dick with the Robin celebration. You cannot do it without him. Even if you roll all the other Robins together, they won’t even be in Grayson’s league.

If DC were to focus on Robin without him, man, sales on that 80th Anniversary Special wouldn’t be nearly as high.

Could you roll out a different anniversary special for each Robin? Probably not because the sales of several of them wouldn’t be worth the time and effort, I believe. Mix and match some? I’m not sure how you would even begin to do that and make sense out of it all.

Of course, this all leads me to wonder if there is a “Nightwing Anniversary Special” in our future. I remember the issue of the New Teen Titans in which he first put on that costume, and it was something that’s still rare in comics even today. A hero growing up and assuming another identity? Not many have successfully accomplished that!

And that also means DC just might do some kind of special when anniversaries of the various Robins arrive. Depending on how that was handled, including timing and how popular some of them have become or might become, they just might consider it.

I mean, I despised Damian Wayne when he first appeared. But he kind of grew on me, as the old joke goes, like a fungus. Now I enjoy the character a lot. Does he always need to be Robin? No, he could easily take another identity, seems to me.

WILL GRAYSON FANS SKIP THE ANNIVERSARY? I think that many of the folks objecting to the inclusion of the other Robins still will go ahead and buy the big special when it comes in March. After all, it will have Mr. Grayson in it, and probably pretty prominently displayed, I bet.

I always like to point out that comics fans (and people who enjoy other genres) ought to be supporting anything near the characters you enjoy. If this Robin comic doesn’t do well, you would be very unlikely to see them try to focus on any individual one in the years ahead. Really.

So, I say, even if you would prefer this book was solely about the first Robin, I would highly recommend you buy your copy (or copies) so that DC might be more encouraged to celebrate the others (and Nightwing) as the occasion warrants it.

Otherwise, you won’t get any Robin events. Hey, some people still say Batman should NEVER have a Robin around because it waters down the Dark Knight. If the anniversary issue sales are poor, they just might validate that opinion. Personally, I think you can have both flavors. Just leave Robin out when the story doesn’t need him.

To me, all the Robins are Robin. They just represent different aspects of the character. And you can’t say that about many comics’ heroes.

People often ask me which member of the Batman family I most closely resemble. As much as I prefer Batman over Robin but like Dick Grayson more than Bruce Wayne, I still don’t consider myself near either of them as much as I want to emulate some of Grayson’s great qualities, like being a detective without all the darkness. So I have to tell people that I like some parts of some of the Batman family, but I don’t see myself anywhere near any of them.

And I’m still looking forward to the big Robin anniversary blowout in two months. If they do anything like the Batman celebration, it’ll be memorable and fun!

What do you think? Should Dick Grayson get his own celebration? Is the Robin event enough? Do you still enjoy these anniversary comics? Do you have any suggestions for what DC could or should do with them in the future? Please be sure to share your thoughts below!