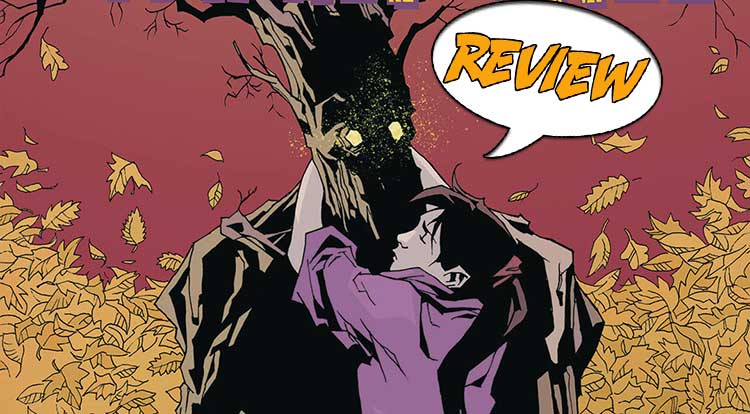 Events begin to ripen in Family Tree #3 from Image Comics as Megan’s transformation continues.  A journey to New York with her grandfather, brother and mother reveals to Megan the fate of her long departed father, and uncovers a conspiracy to destroy all those being transformed.  Will Megan survive?  Find out in our Major Spoilers review! Previously in Family Tree #3:  single Mom Loretta is devoted to her children, particularly Megan.  So when Megan begins to transform into a living tree, Loretta is faced with a terrible decision.  But it is only the return of her long departed father in law, Judd, that Loretta realises not only how bad things could get for Megan, but for the entire world as well.

GETTING TO THE ROOT OF IT ALL

Writer Jeff Lemire takes us deeper into Megan’s ongoing transformation in Family Tree #3.  Not only is it a physical change, but also a mental one as well, as we see Megan meet her dead father in a World Tree of the imagination.  There, Megan sees different people who have clearly been transformed, with her father introducing her to the place she will reside once her change is complete.

Family Tree #3 strikes really hard, particularly if you’re a parent.  The inevitability that your children will grown and change and leave you behind is one of those things about growing old.  But the nature of Megan’s transformation is particularly horrifying, even if there is a utopian vision at the end of it.  Her mother, Loretta’s, reaction to it is heartfelt – she views the changes in her daughter as something that will take her permanently away from her.  That’s the real horror of this story.

Even though Family Tree #3 is the story of Megan’s transformation, as intimated above, it’s really about Loretta’s reaction to it.  Her denial of its spread in the car ride to New York is heartbreaking, as she seeks to reassure her daughter (and herself) that she will be okay.  Her attack on her son for speaking the truth underscores what a lot of parents tend to do – lie to their children to protect them from the harshness of the world.  Everyone does it – your reviewer has done it.  I remember once listening to a mother who had avoided telling her daughter that the 9/11 attacks had ever happened, and being torn as to whether it was the right thing to do or not.  Judd’s retort to Loretta that ‘lying to the girl isn’t (helping) either’ is the response that sets Loretta back on her heels.

DRAWING THE END OF THE WORLD

While Lemire tugs at your heart in Family Tree #3, penciller Phil Hester and inker Eric Gapstur bring the big guns to the artwork.   Lush, brooding and moody, the art in Family Tree #3 full embraces the dark themes prevalent in the set up.  A lot of the imagery is characterised by black inking, which matches the darkness encroaching not only on the main characters, but on the world around them.  There are several memorable images, particularly the family’s walk through Chinatown and the reveal of the World Tree that appears to be Megan’s fate, once her transformation is complete.  There’s also a compelling set of panels where the news of Megan’s arrival at a clinic is passed along to a group of vigilantes.  A larger image set against several smaller panels not only depicts the character of the person snitching on the family, but their actions as well.

It’s also worth noting colorist Ryan Cody’s work, which is in sympathy with the themes of the artwork.  Brown and green tones predominate as Megan’s transformation accelerates.  Cody’s work adds a great deal to the emotional depth of the characters, particularly Loretta’s.

The end of the world comes in many shapes and flavors.  Seeing it through the cruel lens of a horrifying change in a child is particularly devastating, so Loretta’s denial and actions feel real.  Lemire crafts a story that is heartfelt and believable, given the circumstances.  Family Tree #3 is a mile marker on the way to an apocalypse, counterpointing one parent’s efforts to protect her daughter from the truth, while the other parent seeks to protect his daughter with the truth.

An unflinching examination of change in a world teetering on the edge of a violent collapse, Family Tree #3 is also looks at the lengths a parent will go to protect their child from the reality around them. While Megan’s mom tries to protect her daughter, Megan’s father on the other hand seeks the same thing, but with a different approach - the truth.