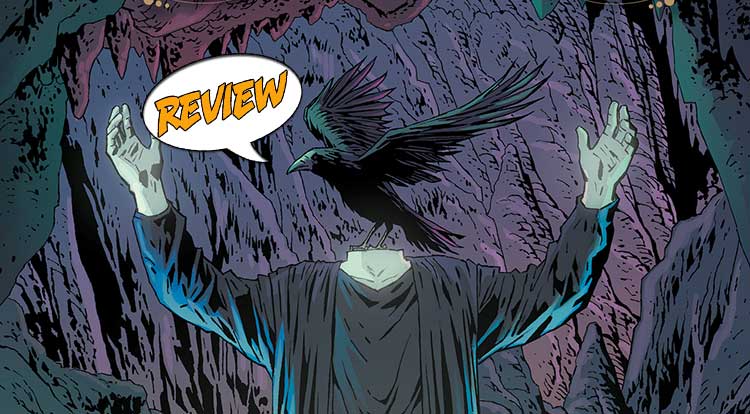 The Devil on the loose in Yorkshire? Balderdash! Or is there something to what the mad old lady claims? Find out in Wellington #2 from IDW Publishing! Previously in Wellington: Sir Arthur Wellesley, 1st Duke of Wellington invites a journalist over to tell him an incredible story that took place twenty years before. A friend invited him to Yorkshire to investigate three mysteries: a missing child, a dog with red eyes, and strange murder. Wellesley takes a look at the mine where the body was discovered, and finds a book written in a strange language, the same kind of letters that happened to be all over the body of the murder victim. He’s also chased by the dog with red eyes. To top things off, an old woman drops by to visit him and claims that the Devil is on the loose.

FROM SKEPTICISM TO CURIOSITY

The old woman has just dropped her bombshell as Wellington #2 opens, and his response is not what she expected. He is less than impressed, to say the least. He wants to turn the murder over to the magistrate, let the old woman sleep in the kitchen overnight, and just go back home. I appreciate a supernatural story that takes place in a world where the supernatural is not commonplace, and the main character reacts skeptically.

Still, he is intrigued. He had the experience with the dog. He slashed it with his sword, yet his sword remained clean. He goes to sleep, but finds himself dreaming of the mine, the dark tunnel which he cannot help but tread down until he finds himself in an open cavern where a headless man inscribes a magic circle in blood. “Petty theatrics,” he calls it. The figure speaks to him, telling him that this is a liminal space between worlds. Someone has pulled it open, and Wellington has no ideas what monsters will come through, and he will be powerless to affect them.

Wellington gets angry and strikes the being down. I love this so much. It is so sensible. At any rate, a howl wakes him up. He’s apparently cranky about being woken up in the middle of the night too, or he’s just irascible. He grabs his sword and gets up to go after the dog. As he strides through the house, barefoot and in his robe, he hears a tapping. He investigates. Kitty is asleep, as is Olivia, and the old woman, but the tapping seems louder when he’s in the kitchen. In fact, the noise is coming from the stables, where the body is laid out.

He finds a woman with a candle standing over the body. He approaches her from behind, sword first, and she swoons. He goes to help her, saying he means her no harm, but he does have questions. She insists that he take the iron (his sword) away from her. Her eyes are large and dark, with no whites. Her ears are pointed. Her hind legs are like those of a doe.

Skeptic he may be, but when he sees something that is clearly supernatural, he wants to find out more. She tells him that corpse in the stables suffered no natural death. That man opened the rift between worlds, and he did so by sacrificing a child.

FULL OF ATMOSPHERE AND DETAIL

The art of Wellington #2 is precise and fitting. It’s nighttime again, and we forget how very dark it would have been in the 19th century. A candle casts little light and creates a lot of shadow, as we see when Wellington searches the house. This is a big, rambling place with lots of pictures on the walls, potted plants on small tables, etc. When he extinguishes his candle and explores by moonlight, everything has a bluish cast. I love all the details of the different rooms he explores. The moldings throughout have carvings on them, as do the cupboards and dressers. The kitchen has an open hearth with the remnants of a fire still glowing.

The fact that the real world is presented so well makes the contrast with the supernatural even greater. Wellington’s dream comes across as bizarre and unreal. We, as readers who know this is a 5-issue story, realize that it probably isn’t just a dream, but in the moment, it is plausible that Wellington would accept it as that. The woman in the stable, who calls herself Minerva, is uncanny in her looks, especially by candlelight.

While not full of action, Wellington #2 has got some good suspense beautifully drawn. It’s like listening to a ghost story around a campfire, where things are creepy, but you still have a connection to the real world.

Wellington has his first brush with the supernatural and finds that there may be more than a murderer in the area.