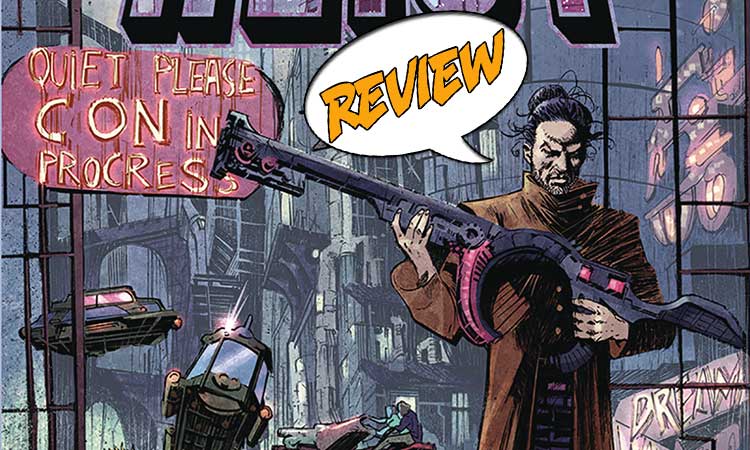 Heist, Or How To Steal A Planet #3 Review

The Conqueror Crows elaborately disguise many of their people as Glane Breld, the most wanted man on the planet. Brilliant plan, or big fail? Find out in Heist, or How to Steal a Planet #3 from Vault Comics! HEIST, OR HOW TO STEAL A PLANET #3

Previously in Heist: Glane Breld makes an alliance with Eddy Lets, son of the woman whose death everyone thinks was due to Glane. He’s looking for two critical members of his crew. Gaville is a master of disguise, and she agrees to join in. She also happens to have Breld’s dog Horace. Eddy gets Celene Disse to join them. Meanwhile, Samuel Reven is furious that his plan to get Breld thrown back into prison fell through. Why the hatred toward Breld? It goes back to an incident between their grandfathers. Breld meets with the team and tells them of his plan to steal the planet of Heist back from Dignity Corporation – easier said than done, as a recent law has established that super-large corporations function essentially as governments and, as such, are above the law.

Celene is with Gaville, who is painstakingly forging party invitations as Heist, or How to Steal a Planet #3 opens. She talks about forgery requiring belief as well as art when there’s a knock on the door. Glane Breld enters and says something about the Conqueror Crows, and Gaville shoots him. The end?

Of course not, but it is a brilliant twist that gets our attention. Gaville criticizes the guy and reveals he was an imposter, and she could tell immediately. He didn’t even disguise his Conqueror Crow tattoo. Then she turns to Celene, who apparently was entirely fooled and has to readjust. Then she calls Breld to keep him informed.

Breld is with Eddy, and we find out about the party. Dignity Corporation is sponsoring a festival, and they need to get in to grab some particular legal documents. The plan is to establish that Lera Lets was not only the leader of Heist but was also its legal owner. In addition, he also plans to establish that Dignity Corporation was never legally associated in the first place. This is incredibly convoluted, but I’m in. A good con is a lot more complicated than a mugging. The next we know, the boys are in exterminator outfits (pink), and Breld puts some red ink dots on his fingers. They need a device to disguise their presence once they get into the party, and Breld has a lead on an experimental prototype. One contamination panic later, the device is theirs.

I’m not sure what to make of the Conqueror Crows. They’re a gang that’s large, tough, and violent. But they’re also a bit nutty and over-confident. They’re excited about their plan to use exact doubles of Breld to mess up his life before he dies, and to assassinate Eddy Lets. They’re so confident about the success of the poor schmuck Gaville killed that it’s almost cute.

Back on the mean streets of Heist, a pair of killers has Breld in sight, although one of them is doubtful. He has a bird who’s trained to poop on targets, but he isn’t marking this Breld. This is a wonderfully goofy idea, and it should come as no surprise that this Breld, when they kill him, is not the real deal. Another fake Breld shows up at his apartment, where Horace attacks and kills him before Brady (the kid) can react.

Another Breld goes back to the Conqueror Crow armory to complain about the assassins that are after Breld, and how he needs more weapons and stuff. Like scotch. He breezes in and breezes back out before they realized that they don’t really recognize him. Yep, the real Breld is a con man, and he now has a cart full of weapons for the crew. I like when characters are clever and can have fun with being clever.

The opening of Heist, or How to Steal a Planet #3 is picture perfect. The Breld imposter looks like the real thing, and when Gaville shoots him – not in anger, not in malice, but matter-of-factly, her attitude is calm if not disgusted. As we learn, she has become quirkier the more disguises that she has done. There is a wonderful flashback to her life in disguises when she started dressing up like animals when she was a child – and she is adorable as a tiny girl. Then she passes herself off as an adult, which is fun right up until she starts getting too much male attention. She branches out for much older, then disguises herself as male, and in each panel it is fascinating to see her disguises. I think it sells us on her being an eccentric expert.

I like the set up with the multiple Brelds. We see some of them die in pretty bloody ways, but it is really fun to see the real one bluff his way into the armory and walk out with a ridiculous amount of stuff. (He basically has a shopping cart.) When the action moves, so does the dialogue, and the pace fairly zips by.

It isn’t all fun and games in Heist, or How to Steal a Planet #3. There are light moments, but they set off the darker situations and the splashes of violence. This is an unforgiving world own by a powerful and not at all forgiving corporation after all.

Heist Or How To Steal A Planet #3