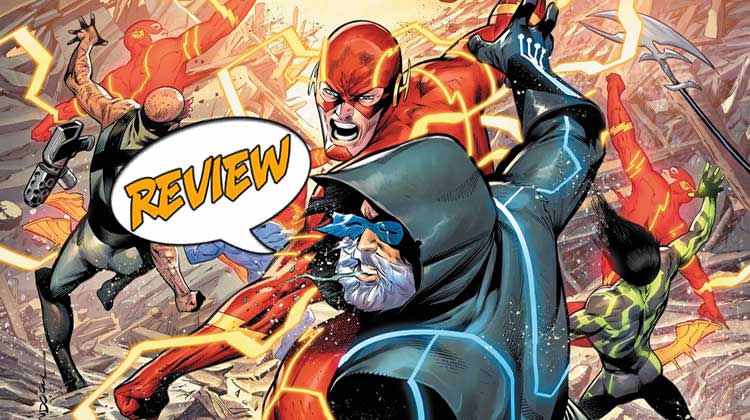 The Flash continues to be one of DC’s best titles. Action, adventure, character development—it’s all there for fans to enjoy. In The Flash #86, Barry has to battle a souped-up Captain Cold while the Speed Force is influencing Him, and not always in a good way! SOLICITATION: The Flash battles Captain Cold for the last time! The Rogues’ Reign is a brutal battle for power over Central City, but the tides are turning, and the reign approaches a deadly end! With the Speed Force in chaos, can Glider help channel Flash’s powers long enough to overthrow her brother, Captain Cold?

DIFFERENT TAKES ON THE ROUGES

This issue is the conclusion of a story called “Rogues’ Reign,” and it’s a powerful one. It’s also part of DC’s Year of the Villain event.

Captain Cold has become King Cold, as he calls himself, with enhanced ice and cold powers from Lex Luthor. His ability to control Absolute Zero has actually slowed Flash down, and that makes it tougher for a speedster to do his thing.

What interested me greatly was that the rest of the Rogues have to team up with Barry to take Cold down. Also, Cold’s sister Glider sees that her brother isn’t handling things well, and he could cause damage that even he might regret later. She comes between the two enemies and works to talk Cold out of what he wants to do.

There’s a fun sequence where the other Rogues have to convince Mirror Master to switch sides even though he LIKES the way things have gone wrong in Central City. He finally sighs and gets down to business because even a Rogue needs to stop a bad guy out of control once in a while

I was particularly fascinated when the Speed Force moved Barry’s anger into overdrive. He starts to glow as he begins to pound Cold into the pavement. Glider tries to stop him, but even Flash is surprised by his own actions. Very gripping writing here!

I always enjoy how Mr. Williamson has a firm handle on just who Barry Allen is. I’ve often seen writers focus on the Rogues instead, maybe because they don’t quite know how to deal with speed heroes, but Williamson keeps Barry at the center of things, and he’s quite the hero. Guilt can be powerful in a man with a conscience.

Mr. Sandoval is fast becoming one of the favorite Flash artists. You can almost feel the crackle in the air when Flash runs or uses the Speed Force in another way. Ouch!

His ability to display emotions on the faces of the various characters is terrific, and his action sequences are just amazing, making me feel like I’m standing right there as battles take place. I often want to duck when something is coming at us. Nicely done!

BOTTOM LINE: A Great Year of the Villain Tie-In

In my estimation, this issue was one of the best things to come out of the Year of the Villain event at DC. I mean, DC has poked fun at itself in several of the Villain tie-ins, but this time, it’s very serious business. And it’s done well.

Moving forward, we’ll see how Barry can deal with the possibility of being out of control and what that means to those around him, including Central City. It’s going to be a bumpy ride, but it will be so worth it!

In my estimation, this issue of The Flash was one of the best things to come out of the Year of the Villain event at DC.