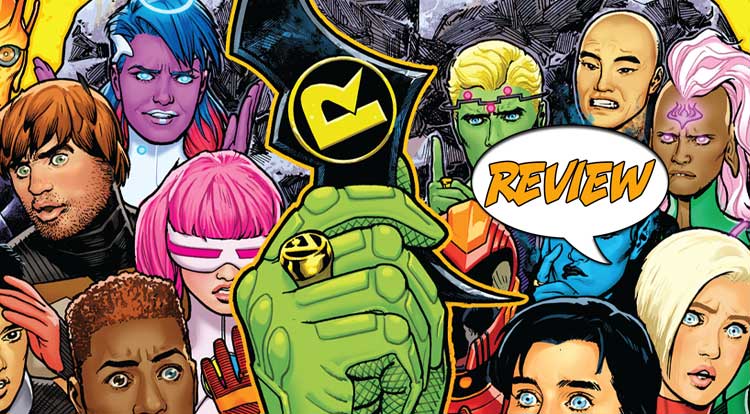 What would YOU do if they told you your best friend was a monster in the future?  Your Major Spoilers review of Legion of Super-Heroes #3 from DC Comics awaits! Previously in Legion of Super-Heroes:  You knew there was no way Jon Kent was going to leave his best friend behind!  Welcome to the future, Damian Wayne!

This is such a terrible idea!

Also, meet the new Legionnaires as they head to a secret undercover mission on the first man-made planet: Planet Gotham!

We open with a broadcast from Dawnstar (which confirms that she’s still from planet Starhaven and gives her the surname Gre’ll, after her co-creator) explaining how much it means for her to see Superboy as part of the team, how the connection to the long-ago age of heroes means a lot to natives of her world.  Far away on planet Rimbor, The General Nah discovers that his son Jo is now a member of the Legion, which throws him into a rage, made doubly tumultuous because he is the person from whom Aquaman’s trident was actually stolen.  On Earth, Jon Kent has once again refused to watch the orientation tapes, instead heading back home to the 21st century to bring Robin forward to meet his new Legion friends, wjo;e another team of Legionnaires heads to Planet Gotham, the newest world in the solar system, where Mordru is being held.  It all goes badly in several different ways, ending with Robin being sent home with a memory wipe, Mordru seeing through Imra’s telepathic attack and Mon-El accidentally having made himself the new leader of Rimbor by beating General Nah in combat.

I have to admit, I’m a little puzzled by the twists and turns of plot, some of which may be hidden in a wall of Interlac text.  There’s a LOT going on here, and everyone is talking back and forth around things, since they already know what’s going on.  The new Rimbor seems to be a sort of feudal world where the strongest survive, which is somewhat similar to the old take on Orando, while having Gotham be the justice center of the U.P. is kind of clever.  My biggest complaint about this issue comes in the sameness of the voices, with Legionnaire after Legionnaire getting a moment to speak only to have it be a similar snakry teenage voice.  Mon-El insists that his punch knocked out the general, not Superboy’s, while Lightning Lad overconfidently claims that his lightning is up the challenge of Mordru’s demonic powers.  I am enjoying the new designs of the Legionnaires, but many of them haven’t even been identified three issues in, which is a concerning bit of pacing, especially when coupled with the continuing joke about the orientation program.  Still, Dawnstar looks good, Ultra Boy and Mon-El are both excellent and we get our first real look at the gold-colored Lantern Legionnaire.  In fact, the art is lively and detailed all throughout the issue, and the double-page spread of Superboy and Robin arriving at Legion headquarters is nothing short of breathtaking.

BOTTOM LINE: I WANT SOME ANSWERS

What it all comes down to in the end is a matter of timing, pacing and whether we, the audience, are on the same metaphorical wavelength as the creators.  I’m starting to feel frustration at the unanswered questions and frenetic pacing, but Legion of Super-Heroes #3 keeps the engine running well enough that I’m still wanting to come back next time, thanks to Sook’s art and the parts of the story that are working, earning 3.5 out of 5 stars overall.  Seeing as the Legion just kicked off an intergalactic incident, I feel like I owe them at least that much.

There are a lot of moving parts and characters, and the revamp of Rimbor could be fascinating, but so much of the plot hinges on characters not explaining what they mean and Jon Kent being too dense to ask... The art is quite good, though.