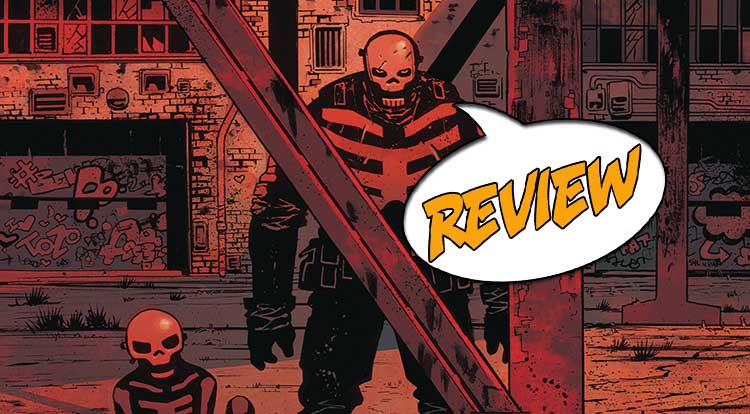 A young orphan boy goes missing and the hand of Skulldigger is suspected!  Skulldigger & Skeleton Boy #2 from Dark Horse Comics re-examines the Batman mythos from a dark dark place.  While Detective Reyes struggles to find the boy and keep her relationship intact, archcriminal Grimjim escapes prison and turns the mayoral election upside down!  Will Spiral City ever be the same?  Find out in our Major Spoilers review! Previously in Skulldigger & Skeleton Boy: In the world of Black Hammer, an uncompromising new vigilante in the shape of Skulldigger rises in Spiral City, but is he more sinner than saint?  An orphaned boy goes missing while Skulldigger begins to fight the forces of darkness, personified by the evil Grimjim…

There’s something fundamentally upsetting about Skulldigger & Skeleton Boy #2 and it certainly isn’t an accident.  Writer Jeff Lemire has crafted a character willing to kidnap a young orphan boy and hold him hostage in his lair until the lad breaks and essentially agrees to be his apprentice in his war on crime.

It’s not quite the Batman and Robin storyline, but it’s not far from it.  As a parent of two teenagers, the idea that a child could be abandoned to the indifferent care of the state and then taken away and warped by the indifferent care of a vigilante is disturbing on a number of levels.  It’s bad enough it detracts from the positives in this dark examination of the vigilante as hero trope.  I wanted to like this book, and in some ways, I do.  But I’m at a point in my life where certain aspects of it leaves me feeling distinctly uncomfortable.  Which probably means that Lemire has achieved his goal!

From the world of Black Hammer comes this exciting new comic come Skulldigger and Skeleton Boy, fighting the good fight in Spiral City!
Happily, Lemire hasn’t done anything so cynical as to try to present Skulldigger as a family friendly vigilante.  Anyone going around with a death’s head mask isn’t going to be rescuing kittens from trees, now, is he?  Instead, we see Skulldigger as a tough, no nonsense murderer of criminals, who has essentially kidnapped a boy to be his ward.  The training regime is brutal, and Stockholm Syndrome eventually sets in, as the boy accommodates himself to his new circumstances in an efficiently told montage sequence, before emerging out the other side ready to embrace his new vigilante status.

Perhaps the most raw sequence in Skulldigger & Skeleton Boy #2 is when Detective Reyes, herself an orphan raised like the boy in similar circumstances, is warned off the case by the Chief of Police.  Some might applaud what Skulldigger does – after all, how many votes would a rapist or murderer get?  But for the Chief to openly states ‘That psycho kills the right kind of people.  He makes out jobs easier,’ is still startling.

What impressed me the most, aside from Lemire’s willingness to go to some very dark places, is the efficiently told story line, and how Lemire paces it so brilliantly.  All the different sections of the story – the kidnap of the boy, the introduction of Detective Reyes and her faltering relationship, and the action set piece at the end, all feel organic.  There’s no sense of these different aspects being just bolted together.  It all flows seamlessly and left me with a sense of having read an actual story, and not just a disparate bunch of story elements thrown together.

While I’m a little ambiguous about my response to the writing, I’m rock solid on how good the art is.  Tonci Zonjic brings a sort of sensitive realism to the artwork.  Aside from Grimjim, whose horrific facial features underscore his derangement, the rest of Skulldigger & Skeleton Boy #2 aims for the middle.  Reyes’ revelation she spent time in an orphanage when she was a kid is supported by Zojic’s art – a slight turn of the head, a hand supporting a chin, turned back and a bent head, all convey character and emotion in an economical manner.  Couple this with the gray and brown toned coloring, and the audience should realise they reading a more or less naturalistic take on the crime genre.

If nothing else, Lemire will have you checking your understanding of your love of vigilante style comic book anti-heroes.  Why do I give a pass to the Joker?  Is it because when he’s killing people he’s laughing his head off and is gaily dressed while doing so?  Is Skulldigger just the next step in the evolution of the comic book vigilante?  Or is it simply the fact a child has been taken and is being turned into an apprentice to a man who kills and kills to satisfy whatever dark hunger he has?

A thought provoking, if disturbing quasi-examination of the Batman mythos, Skulldigger & Skelton Boy #2 will have the reader examining their pre-conceptions and possibly second guessing themselves in the process.