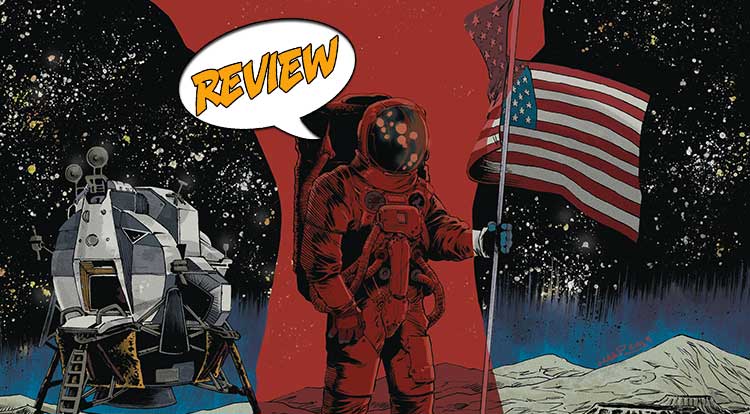 It’s 1969 and the brave men aboard the Apollo lunar module are set to land on the Moon.  But they’re not the first there, nor the most dangerous.  For in Rom: Dire Wraiths #1, from IDW Publishing, creatures far darker and more lethal lurk in the lunar shadows.  What do they want?  Find out in our Major Spoilers review! Previously in Rom: Dire Wraiths: Rom, the Space Knight, born of a line of figures from Hasbro, soared through the depths of space to Earth, and adventures with the X-Men and The Avengers.  Now, he is captured by the Dire Wraiths, while on the Moon, four of their compatriots seek a way of the satellite and onward to invade the Earth.  Fortunately, it is 1969, and NASA is about to do them a favour…

Writer Chris Ryall brings not one, but two stories featuring our favorite Space Knight, Rom!  The main story takes place during the first moon landing in 1969, while the backup (featuring art from Sal Buscema, no less!) does star Rom himself.

A classic character from the 80s makes a welcome return to modern comics!
The set up to the main story, subtitled ‘One Small Step for Dire Wraith-Kind’, is far more audacious than the actual execution.  It is 1969, and America has sent three men into orbit around the Moon, with the intent of landing two safely on the surface.  It is the shining moment of a decade’s long programme to prove American supremacy during the Cold War, and the boldest, bravest voyage by men since Ferdinand Magellan set out with his brave sailors to be the first to circumnavigate the globe.

Except that there are already a group of humans in space, secretly safeguarding the planet from possible alien incursions.  Still, the propaganda value of landing men on the moon is too good to miss, so for the enraptured population of Earth, those three brave men are the first.  But what is this secret cadre of men and women protecting the Earth from?  That’s where the Dire Wraiths come into play.

There’s something delightfully loopy about the set-up.  The three astronauts are in on the joke, and are enjoying their ride into space.  The real tension emerges amongst the multi-national team assembled on the secret space station known as Adventure-One, as they argue whether it is worth being armed on their mission to safeguard the men aboard the Eagle.

Ryan deftly hands a large and diverse cast of characters.  Happily, the alien Dire Wraiths aren’t all cut from the same cloth, as he has made an effort to give each member of the quartet a semblance of character.  Their slightly archaic dialog also helps differentiate them from the squabbling humans, and while a little stiff at times, the dialog is used to good effect.

Similarly, the team on Adventure-One spends as much time arguing over the merits of their equipment, as they do working together to ensure the safe landing of the lunar module.  These arguments tend to act as proxy for interpersonal tensions, such to on the nose named Colonel Anatoli Kiev, the Russian military expert, and Dr Elmo Aubreyson.  These sort of conflicts are standard fare, and while that may be the case, they make for a more interesting story than would otherwise be the case where everyone gets along.

In a lot of ways, the back up story, ‘Rom: One Small Step For a Spaceknight’, is the more interesting of the two, because it actually features Rom, our titular Space Knight.  Rom and his space flying ursine buddy Nikomi escaping captivity from the Dire Wraiths.  A diverting little feature, it is in effect a flashback to events before the main story.  Featuring art by Guy Doreian Sr and Sal Buscema, it’s a fun throwback to the characters heyday in the 1980s.

A lot of the entertainment value in Rom: Dire Wraiths #1 comes on the artistic side.  Ross Campbell’s colors in the backup story are lush and verdant, which goes against the monochromatic palette a more serious take on a story like this would feature.  In the main feature, colorist Jim Boswell dials the palette back slightly, opting for a more moody coloring experience.  Luca Pizarri’s art in One Small Step for Dire Wraith-Kind is more your ‘heroic characters in standard heroic poses’ which perfectly suits the tone of the story which opts less for realism and more for action and adventure.

Rom: Dire Wraiths #1 doesn’t reinvent the wheel in any real manner, but what it does offer is a solid opening issue for the reader.  While a lot of the main feature is setting up the characters and situations, it is handled briskly and brings to the reader all the essential elements.  The back up feature is just as good, with more emphasis on the older elements of the main character.

A fun, traditional opening issue packed with story and characters, all deftly woven together by a strong collection of industry professionals. And who could ask for more?