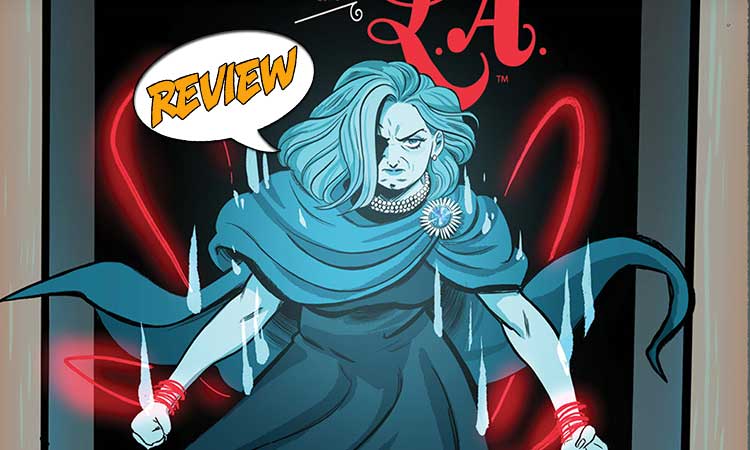 College is a time of new experiences, new friendships, and changes for Daphne. But what about Agi and the ghosts of Rycroft Manor? Can they adapt to Daphne? Find out in Ghosted in L.A. #7 from BOOM! Studios. Previously in Ghosted in L.A.: we learn a little about Ricky’s (the shy ghost’s) life as we continue getting to know everyone in Rycroft Manor. Daphne and Zola bond over the mystery door. Zola doesn’t like all Agi’s rules but learns from Shirley that Agi has her reasons. On the other hand, Agi won’t talk about the door in the basement. Zola starts getting frustrated until she learns that ghosts all have their own special abilities – and she wants to discover hers. Back on campus, Daphne’s friend Kristi finally catches up with her. Daphne is happy to see her but bound and determined to keep Rycroft Manor a secret. She starts out by lying, and it leads to her breaking up with Kristi – and instantly regretting it.

This time, Ghosted in L.A. #7 shows us Zola Tesla’s life and death. As a popular musician, her life was busy with performances, meetings, photo shoots, and occasionally time with friends. She takes medication, and there are hints of drugs, and that leads to her death. Whatever power she’s developing as a ghost is frustratingly difficult to control. She decides she cannot keep it to herself and goes looking for help.

Daphne puts in some time at school and Ronnie covers at Rycroft. As they keep in touch by phone, Daphne’s roommate overhears one side of a very odd conversation. Michelle starts following Daphne, spying on her and Ronnie. Ronnie’s life is also getting more complicated. He recently made connections with a Queer Meetup group, and now he’s not showing up, and his friend Edie makes the point that they’re there to support each other.

Daphne and Ronnie meet, and Daphne immediately starts obsessing about whether she’s trying to appease her mother too much, which comes about from obsessing about her fight with Kristi. Meanwhile, despite not having enough time for school, she’s been researching Rycroft to try to find out anything she can about the door. Instead, she finds out more about Agi, and clearly is obsessing about Rycroft.

Zola’s power is going out of control, and Shirley cannot help her. Zola does not want to bring Agi in for fear that will be the end of her. As if on cue, Agi arrives and gives her a talk about taking responsibility for her choices when she was alive. On the other hand, Agi understands what fame means in life, and they make a connection that Zola was not expecting.

Life at Rycroft may be better since Daphne arrived, but it’s also gotten more complicated. Ronnie is part of the picture. Ghosts are making attachments with the young people, but this changes the relationships they’ve had all these years. Some of them feel their death and loss more acutely. And Agi realizes that she, running this house, may be stuck in the past. She calls a house meeting.

Ghosted in L.A. #7 has some very busy ghosts. Zola’s powers involve streamers of stuff floating around her and getting on everything around. I like Zola’s mix of frustration, desperation, and ultimately her willingness to ask for some help. Pam and Shirley, who cannot figure it out, are equally expressive. The ghosts are consistent in that, if there is a shortcut through a wall, floor, or ceiling to get to where they’re going, they take it. I think that makes it more convincing that they’re ghosts, that they’ve grown accustomed to their immateriality.

Daphne is as intense – almost manic – as she’s ever been. It is small wonder that Michelle has finally started watching her, spying on her. It’s fun to see her both intense and somewhat bewildered. The settings are also beautifully drawn. I particularly like the library. It looks like a gracious old campus building, elegant and comfortably aged.

Ghosted in L.A. #7 has plenty of interpersonal drama. The ghosts and humans have truly become intertwined, so more and more, one individual’s decisions affect several people. I like intensifying the mystery of what’s behind the door with how has Agi managed to keep Rycroft going for all these years.

Trying to find the proper work-afterlife balance can be tricky.