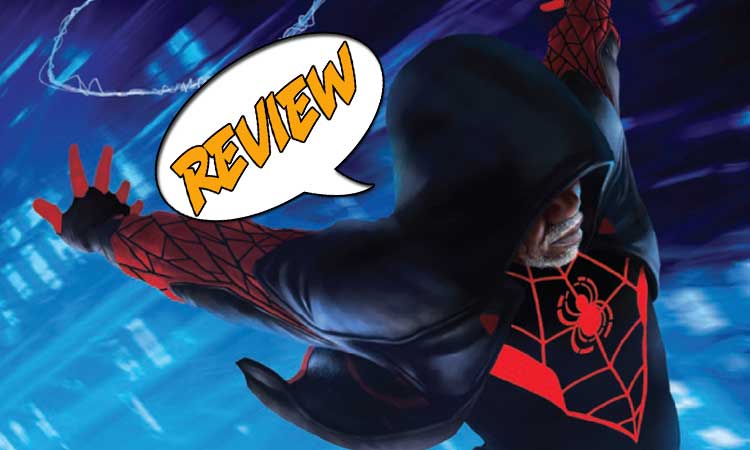 Brooklyn is the last city on a blasted and horrid Earth and Miles Morales is it’s last protector.  But as the years take their toll, can he keep up the fight? Your Major Spoilers review of Miles Morales: The End #1 from Marvel Comics awaits! Previously in Miles Morales: The End: Humanity makes its last stand in the only place strong enough to survive: Brooklyn. Former Spider-Man, Miles Morales, leads the last bastion of civilization into the future.

Miles Morales: The End #1 opens with a father and daughter trying to find their way to Brooklyn.  Before they can make it, they are attacked by a group of monsters. Just when they’re about to be killed Miles Morales arrives and saves the pair.  He escorts them to Brooklyn where it’s revealed that he’s known as The Mayor and runs the city.  The city is a technological marvel but also one of the last remaining cities on Earth.  Miles goes with his deputy mayor Maxine Lee who has an urgent matter.  It turns out that a caravan from Jersey is under attack from a group called One America Army.  Miles and a team set out to save them.  There he encounters someone named Captain Last, who is a mutated man who took the super soldier serum and is wearing Captain America’s costume.  Miles defeats them and talks to the leader of the caravan who turns out to be Kamala Khan’s son. One week later, Miles is talking with the father and daughter he rescued when Brooklyn is attacked by the One America Army who has found a way to break through the defenses.  Miles dukes it out with Captain Last and is overmatched.  He makes one last effort to use his bioelectrical powers to take the attacker out, but it’s too much strain and passes away after taking out Captain Last.  The city holds a memorial for him and vows to remember his vision.

When these “The End” titles were announced I was suspicious of them being one shots. I was worried that one issue would not be enough to establish the content necessary to make these “final tales” impactful.  With Miles Morales: The End #1 it seems like my suspicions were confirmed.  While the story itself is fine and is a pretty decent plot, the death of Miles feels tacked on at the end.  Also, there’s a lot of things about this world that are hinted at and referenced but none of it is given the time needed to make any of it resonate. So much of this issue is winks and nods to past stories from Miles Morales’ history and seems to try to let Miles history do the emotional heavy lifting rather than establishing that sentimentality in this book.

So I will say, I like this art, as long as no one is supposed to be moving in the panel.  The art is cartoony in a fun way and the colors really pop.  But once the action kicks in, things become nearly indiscernible. While the exaggerated facial expressions and bodies are fun to look at when the action is subdued, the style falls apart in the action scenes and becomes confusing to look at.

Bottom Line: A World That Needs More Time To Develop

The biggest problem in Miles Morales: The End #1 is that there just isn’t enough time given to this world to make Miles sacrifice at the end the emotional punch it was designed to be.  While it’s a nice and sweet story with plenty of hints at the character’s history, it just isn’t fitting to be Miles’ final tale. 3 out of 5

Miles Morales: The End #1 is a fine story, but the addition of Miles’ death at the end and it being advertised as “the final Miles Morales story” makes this feel like a shallow attempt to cash in on sentimentality that just isn’t earned in these pages.