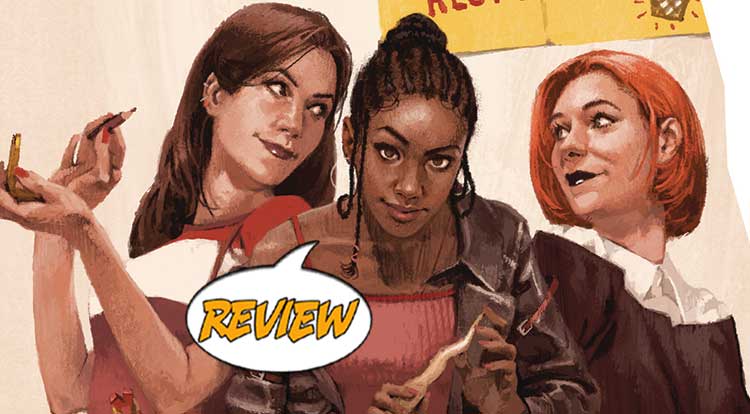 There’s a new Slayer in town, and she’s got a whole new (but oddly familiar) crew!  Your Major Spoilers review of Buffy The Vampire Slayer #11 from BOOM! Studios awaits! Previously in Buffy The Vampire Slayer:  There’s a NEW Slayer in town – and it’s up to Team Kendra to save the day! The all-new team of Willow, Cordelia and Kendra make their first appearance together to save Sunnydale – but it also might be their last!

BUFFY IS GONE… BUT THE HELLMOUTH CROSSOVER CONTINUES!

So, I missed a couple of issues, but the presence of Kendra in this issue can mean only one thing: Buffy is dead.  At least a little bit, anyways.  We open with Willow’s now-ex Rose meeting with Robin and Kendra and talking about the strange things that have been happening, both in mystical and interpersonal terms.  As his Slayer flirts with Rose, Robin stalks off into the night in a rage.  Elsewhere, in a cemetery, Willow and Xander are working the regular patrol, when something spurs him into a rage at her.  He transforms into his pseudo-vampiric form and discovers that whatever is affecting him is lessened in that form, just as Kendra arrives to stake him.  She isn’t successful, thanks in part to Willow’s having shared her soul with Xander, but when Robin arrives, he too is gripped by unexpected rage.  Snarling, crying and then attacking Kendra, Robin is consumed by rage.  His eyes turn read, and he snarls, “I feel perfect.”  He then explains what has been happening as an army of simiilarly raging Sunnydale men assembles around them, all speaking of the one who commands them… The Hellmother!

THIS ART IS… STRANGE

If I’m readiing the final page correctly, our favorite Slayer is back in action (though, to be honest, I can’t tell if it’s her or not, and the dialogue makes me think it’s not) and the final chapters of ‘Hellmouth’ headed for a conclusion, but the biggest takeaway from this issue for me is the oddness of the art.  Willow looks weirdly like Wednesday Addams throughout the issue, and even characters who aren’t possessed by strange spells are wide-eyed and terrifying.  Lopez combines limited facial features with really hard-edged linework that gives each face a terrifying air.  In fact, on my first read-through, I couldn’t tell that Robin and Xander were being possessed, even though their transformation includes weird throbbing veins, red eyes and slasher smiles.  The story is more successful, especially in the way it folds in Robin Wood’s new status quo and Kendra’s appearance, but I’m still not entirely sure what might have happened in the greater crossover to date.

The ‘Hellmouth’ crossover has united the Buffy and Angel ongoing series, but this issue feels like it’s all side-story, without much in the way of developments.  Buffy The Vampire Slayer #11 has a few hiccups in the art and focuses almost entirely on the characters, which helps to build drama but works against the larger narrative, earning 3.5 out of 5 stars overall.  I think I’ll come back next time around, but I’m not really in any hurry to pick up the issues I might have missed.

This feels like a full-fledged chapter, but slightly confusing moments in story and art make it one I had to read through more than once, and the art is... puzzling.