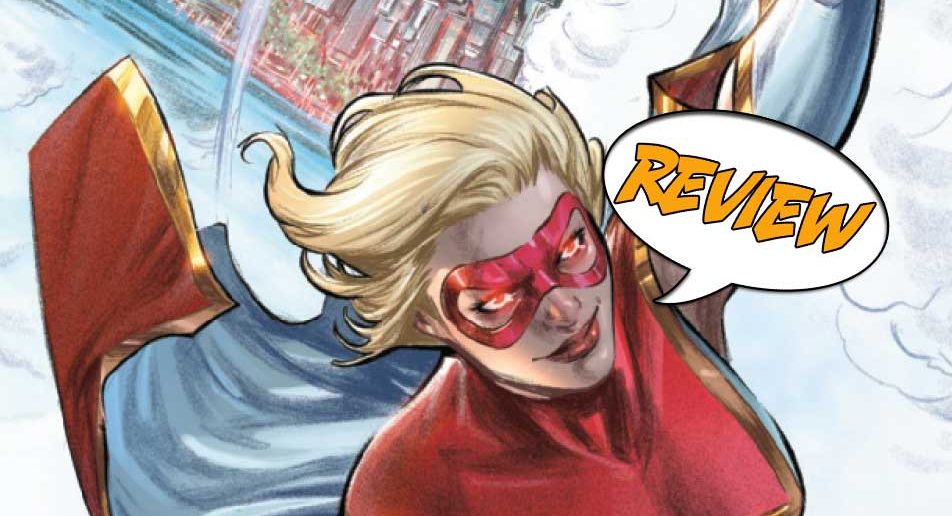 Mild mannered and morally questionable reporter Ripley Ryan, is on the run.  To make things worse, there just so happens to be an Infinity Stone lodged in her chest.  Your Major Spoilers review of Star #1 from Marvel Comics, awaits! Previously in Star: Ambitious reporter Ripley Ryan rocked New York City when she became the hero STAR, adored by everyone. But in truth she was Dr. Minerva’s attempt at a Kree-human Super-Soldier. Desperate for the strength to control her own destiny, she tried to kill Captain Marvel – and failed. Ripley was left, defeated and powerless, in the Raft…or so she thought. The Reality Stone has found her, and now no prison can hold her.

Star #1 opens up with a dream sequence showing the time when Captain Marvel punched a hole clean through Ripley Ryan’s chest.  Fed up with the trauma of that incident and being cooped up in her apartment for weeks Ripley decides to head out into the city.  This leads her to The Pop Up Bar With No Name, a trendy spot for villains and henchmen. Her quiet night is interrupted by the arrival of Titania who has an issue with where Ripley is sitting.  Star tries to use her new Reality Stone based powers to fight Titania but hasn’t gotten a hang of them yet and ends up leaving the bar via a window.  That’s where Loki finds her.  He takes her away and attempts to forcibly remove the stone from her chest but fails, allowing Ripley to escape. Convinced that there are others who are after her, she turns to the one person she knows is great at uncovering secrets, Jessica Jones.  Unfortunately the detective isn’t thrilled to see her, since in the past, Star tried to kill her best friend Carol Danvers. The two end up scuffling with Star still unable to get a full grasp of her powers.  She manages to get the upper hand on Jessica, but before she can go any further, she’s interrupted by the arrival of The Scarlet Witch.

There are a few things I really liked about Star #1.  First off, I enjoyed the tone.  There’s a level of sarcasm that permeates through the issue that is well used to establish a more lighthearted take on a villain/anti-hero focused book than what is normally seen. I also enjoy the fact that Ripley doesn’t really understand her powers and seeing how they don’t always work the way she wants is entertaining.  On the other hand, there are some things I really didn’t like about this.  For one, Ripley’s personality isn’t well established here.  Is she suffering from trauma? Does she just want answers? Does she just want to fight people? We can never tell, because it seems like her only motivation is to do whatever is necessary to make the next plot point happen and there’s no reflection on any of it. Also, I wasn’t much of a fan of the near-flippant way the topic of “trauma” was handled.

Give The Letterer Some Props

It’s not too often that the letterer gets mentioned in reviews but I think that VC’s Clayton Cowles deserves some recognition.  I’m always a fan of the lettering that’s become standard whenever there’s an Asgardian on the page and with Loki being in this issue, it’s on full display.  Other than that, the choice to use a completely different font when Ripley is using her powers is a great choice that helps visualize a powerset that isn’t as flashy as some other characters.

The Bottom Line: A Stumbling Start

Star as a character has potential.  Everyone loves a good anti-hero when they’re done right and Star’s powers have a lot of room for some fun.  Unfortunately in Star #1 the main character isn’t compelling enough and the events around her aren’t interesting enough to carry the issue. 3.5 out of 5

Star #1 suffers from having just too much untapped potential. There are some parts of this story that are good and show promise ultimately, the creators dropped the ball on an interesting premise.