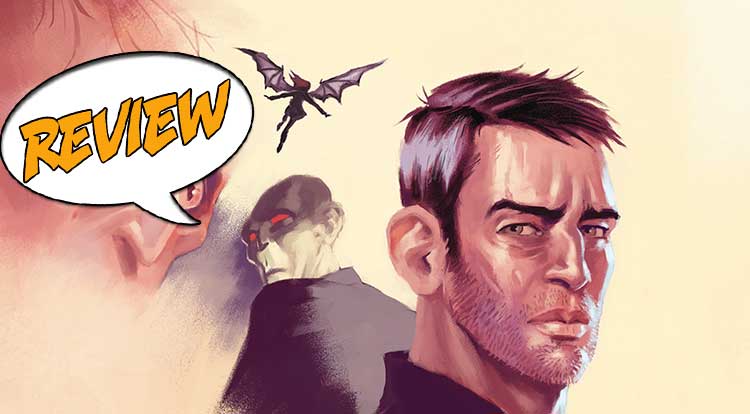 Mo’Lock is on the case of missing city workers in the sewers while Cal uses deadly force and gets some sweet face time with vampiress Victoria in Criminal Macabre: The Big Bleed Out #2 from Dark Horse Comics!  Want to know more?  Find out in our Major Spoilers review! CRIMINAL MACABRE: THE BIG BLEED OUT #2

Previously in CRIMINAL MACABRE: THE BIG BLEED OUT:  Cal, with his pal Mo’Lock, is an investigator of the strange, the unusual, the eerie and the weird.  Cal gets entangled with a night club managing vampiress Victoria, while Mo’Lock decides the detective agency needs to do some detecting after being handed a case of missing city workers…

Creator and writer Steve Niles begins to slowly ramp up the tension and the heat in  Criminal Macabre: The Big Bleed Out #2 as Cal is forced to use lethal force against a man who claims to be in love with his own interest, the vampiress Victoria.  Victoria’s willing blood donor, his attack on Cal ends badly for him.  Meanwhile Mo’Lock is actually earning some scratch for the agency, using his contacts in the literal city underworld to help track down several missing city workers.

The opening issue of this series was a slow burn, a basic story that set up the twin storylines.  Criminal Macabre: The Big Bleed Out #2 begins to advance the plot, but Niles still keeps it simple.  I’m in two minds about this approach – on the one hand this is more or less an all ages issue, even with some of the gunplay and the gruesome scenes at the end.  On the other hand, the jaded adult in me wants a bit more depth to the characters and storyline.

For example, Cal kills a man, but basically gets off scot free as he calls in a favor from a police detective he knows.  It’s basically ‘hi’ then ‘bye’ as Cal heads off to his date with Victoria, leaving the cops to clean up his mess.  There’s no complicating factor, no police roughing him up, no lawyer dropping in at the last minute to get him out of jail.  It feels perfunctory at best.  That’s not to say a younger reader won’t appreciate the color and movement, but older readers will miss the chance to go a bit deeper.

Happily the art is not only a step up from the plotting, but also a step up from the first issue.  Gyula Nemeth’s work in Criminal Macabre: The Big Bleed Out #2 takes advantage of the horror in the Mo’Lock storyline to bring atmosphere and tension as Cal’s partner descends into the sewers of LA to find clues to the disappearance of the city workers.  The writing is still a little flat, but Nemeth creates a world of shadowy, dripping tunnels and strange denizens.  The larder scene is a little stomach churning, especially its implications, and Criminal Macabre: The Big Bleed Out #2 is all the better for it.

BOTTOM LINE:   NEEDS TO UP THE STAKES

Urban fantasy, or its sub-set, urban horror, where fantastical creatures are placed in an urban setting, and often featuring detectives, has a long running pedigree all the way back to the early 20th century.  From Jim Butcher’s Dresden Files books, to Christopher Fowler’s urban thrillers such as Rune or Darkest Day, there’s a place under the fantasy umbrella for dark goings on in an urban setting.  While Niles isn’t yet making much of the dense history and geography  of Los Angeles, there’s enough going on to pique the attention of any number of genre followers.

Criminal Macabre: The Big Bleed Out #2

A good, if basic storyline, slowly begins to ramp up the stakes as Cal finds himself falling for a vampire who might be playing a double game and his partner goes an even darker shade of green as he finds the missing city workers. Art by Gyula Nemeth saves the day, and there’s enough potential in this series for your reviewer to urge readers to come back for more.