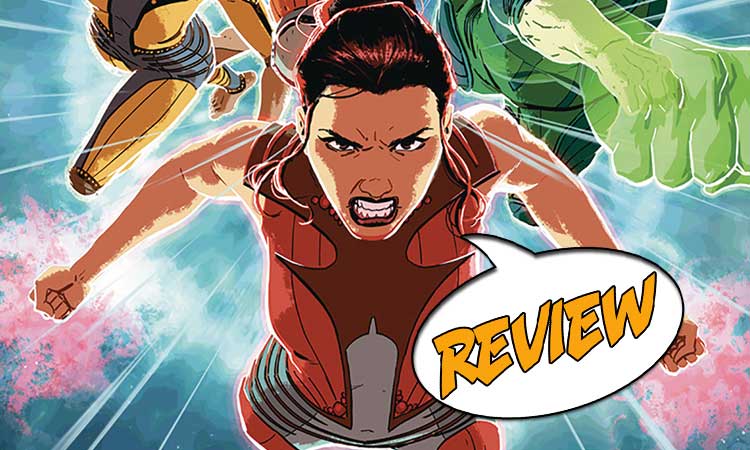 As Nihilio and the Gyre converge on Earth, what can the Astro-Friends do? And will they finally accept that as their nickname? Find out the in the shattering conclusion to Psi-Lords #8, from Valiant Entertainment! Previously in Psi-Lords: Nihilio, the dead star around which the Gyre is located, hurtles toward Earth and has reached the Kuiper Belt already. It looks like certain destruction. In the Gyre, Scion has hidden a fusion bomb. The Starwatchers capture Scion and try to collect it. Tank, Hazard, Beacon, and Artisan try to reason with Dr. Patience. In the confusion, Scion sneaks away, gets the bomb, and steals Dr. Patience’s ship. Our heroes fabricate a ship to chase after him, and Artisan calls on Ravonrok, who lets them tap deeper into their powers so they can boost their speed.

Psi-Lords #8 opens on further fighting between the Widowers and the main characters. Vadim kills Artisan. Hazard and Tank turn on him, ignoring Dr. Patience’s calls to get to the bomb before it hits Nihilio. In the confusion, the bomb triggers Nihilio to go nova. Ravenrok claims to know how to stop it, and he will tell them…if they free him. Dr. Patience pleas for them not to listen. If the nova consumes the other wardens, they will be the only ones who can keep him imprisoned.

And that’s when Beacon figures it out. Why do the Starwatchers forbid wardens from killing one another? And why did they start out in the lab? It turns out that each of them has a sliver of Ravenrok’s consciousness inside of them, which is also the source of their powers. This is an innovative way of not only imprisoning someone with god-like powers, but also explaining the origin of incredible superpowers. To take it one step further, each of them is shaped by a specific aspect of Ravenrok. Tank is protective, and he won’t agree to free Ravenrok because he’s too dangerous. Beacon has his knowledge and thus knows him too well. Hazard is a different aspect altogether, and she sets him free and the Earth is saved.

But that’s not the end of the story. Scion is still out and about and, like the toady he is, offers to be Ravenrok’s loyal servant. Ravenrok doesn’t need him. So much for him. Ravenrok does, however, give Beacon and Tank back their names – Georgette and Dmitri – and allows them to keep their powers. He decides to keep Eva’s (Hazard’s) body for his own, and promptly goes off to start taking over the universe. I love Tank’s line here, “Why can’t we ever meet anybody nice in space?”

Hazard’s condition to free Ravenrok was to bring Artisan back. There are three of them – four, with Dr. Patience, and they have a ship. Dr. Patience lets the shoe drop that there are other Gyres throughout the universe, holding other Psi-Lords. He deputizes them as Starwatchers, and the universe is open to them.

Overall, the story had some moments that seemed confusing or contrived, but I like how everything fits together at the end. Even the potential destruction of the Earth turned out to be a MacGuffin, but a useful one as that gets us to buy into the whole set up.

THE LOVELINESS OF SPACE

I really like the way space is depicted in Psi-Lords #8. It’s colorful and it’s beautiful. Nihilio going nova is dramatic and Ravenrok as a vision is terrifying and god-like in his enormity and his seemingly encompassing stars. It’s a terrific look that keeps space visually interesting. I also like the subtle shift in color after Ravenrok’s departure, when the background blue becomes just a little brighter.

The character work is downright gorgeous. There are so many intimate emotional moments – death, knowledge, fear, and resolution. As always, the close ups are stunning. And after all this time, I still get a kick out of the fact that they all run around barefoot. They’re apparently invulnerable to being in space, so plainly not having shoes is no big deal, but it just amuses me.

The road to get to this point in Psi-Lords #8 was hectic and rocky at times, but the story concludes neatly while still being open-ended. I like the characters even more, and I like that they’ve decided to embrace who they are right now, rather than go back into the past and try to dredge up what they once were. It leaves us the feeling that the end is a beginning.

From being prisoners to having the universe before them is quite a trip.