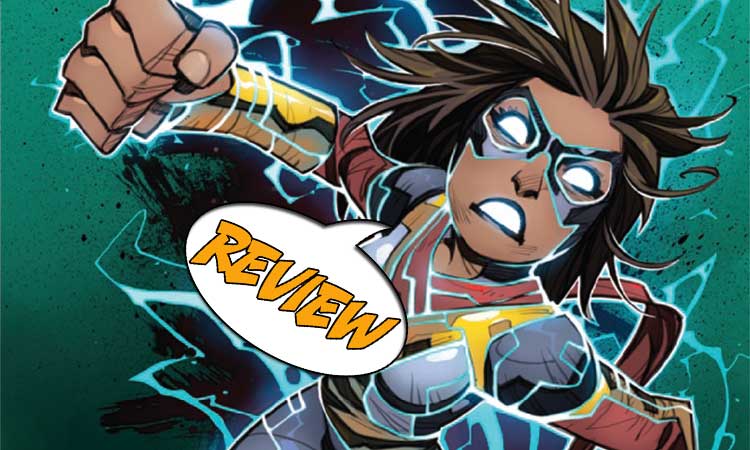 Kamala Khan’s ongoing struggle with her own personal demons turns literal and all that’s at stake is her morality, her loved ones, and the safety of Jersey City. Your Major Spoilers review of The Magnificent Ms. Marvel #11 from Marvel Comics awaits! Previously in Ms. Marvel: Things just keep piling up for Kamala.  Her father is in the hospital fighting for his life, her relationship with Bruno has changed fundamentally, the crazed Mr. Hyde is rampaging through Jersey City, and now her new suit has taken on it’s own murderous personality.

Ms. Marvel #11 kicks off with Kamala Khan facing off with the now self-controlling suit, which is calling itself Stormranger. The suit has determined that Mr. Hyde is a threat worth killing, which Ms. Marvel is not okay with.  The two argue and fight over the fate of Mr. Hyde until Kamala just wraps him up in her giant hand and takes off running. She manages to get to the police station after cobbling together a new disguise from some friendly passersby. Stormranger appears and the two square off again.  But before the suit or Kamala can attack each other the suit determines that Mr. Hyde is no longer the biggest threat in the area. Instead, it decides that Ms. Marvel’s one time friend turned nemesis Josh is the bigger threat and takes flight to find him.  Kamala attempts to grab on and fly with Stormranger but the suits defensive systems engage and leave Ms. Marvel plummeting underwater.

One of the hallmarks of Saladin Ahmed’s run on Ms. Marvel has been the usage of narration.  In past issues the narration would speak about an abstract concept while the story itself would loosely mirror that narration in clever ways.  In Ms. Marvel #11 the narration is still there and it’s good, but being that the narration is speaking about battling darker versions of one’s self and story is literally Kamala fighting her own costume that has taken her likeness, it’s a bit on the nose.

Ms. Marvel #11 still has the things that have made Ms. Marvel such a popular and engaging series: Heart on it’s sleeve heroics, teenage angst and drama, and fun colorful action. On the other hand what this issue is lacking in subtlety.  The relationship between the main plot and the narration come close to just beating you over the head with the point it’s trying to get across.  3.5 out of 5 stars.

The Magnificent Ms. Marvel #11 is a fine continuation of the ongoing storylines, but it lacks the nuance that the previous issues of the series has had in spades. This bluntness makes for an uninteresting reading experience on it’s own.