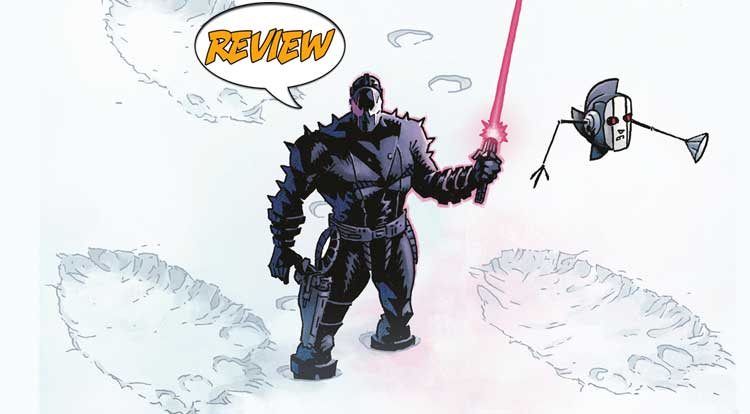 Grendel seeks refuge on a world of ice…  but will he be welcomed or ambushed?  Your Major Spoilers review of Grendel: Devil’s Odyssey #3 from Dark Horse Comics can be found… after the jump! Previously in Grendel: Devil’s Odyssey:  Grendel Prime lands on a freezing planet and finds a stunning city made of ice, whose caretakers are long-living, intelligent creatures.  Could this planet be a good home for the rebirth of humanity?  And if it isn’t, will Grendel Prime survive his encounter with another alien race?

After a desperate gamble to save his life and mission, Grendel Prime awakens on his ship, with the drone called Seven looking after him.  He’s been unconscious for more than four days after expending his energies in a defensive blast on the previouus planet.  After returning to action and recharging the ship, Prime and Seven make their way to the next possible world, where they find a frozen wasteland.  Even the temperate regions are nothing but snow and ice, and the unique qualities of the water make the ice structures stronger than steel.  He even finds a city, though it seems to be abandoned, with row after row of alien forms frozen into the ice.  Moments later, Grendel Prime is greeted by a group of mobile aliens who explain the truth about their world: Limited resources means that most of the population is kept in frozen stasis, with only a few dozen active at any given time, monitoring the others.  They’ve met aliens before, which raises an unexpected answer: A wall of frozen aliens, proof of starfaring aliens at last!

It’s information he can probably work with…  in 6000 solar cycles, when his turn out of the ice comes.

MADE OF METAL AND SINKING FAST

It’s been a long time since I’ve rad any Grendel, and I have to say: I think I’ve missed some things.  Even so, this issue quickly explains all a reader needs to know, thanks to Seven’s helpful (and perfectly natural sounding) exposition.  The tension on planet Qryntiti is perfect, even though it’s more than a little familiar for fans of ‘Star Trek’ or similar science fiction shows: Hero shows up, finds mystery, aliens greet him, then things get weird.  The use of the aliens is very subtle here, with bits of dialogue (“Resources are limited” and “All must take their turn under the ice”) recurring in dialogue until they become clear and the final cliffhanger with Grendel on his way to an icy doom feels both surprising and inescapable.  As with most Wagner joints, I sort of wish that I’d waited for a collecte issue so that I could see more of the story at once, especially with this issue’s flashback of Prime in action alongside a surly young Lieutenant giving us some back story on how the human race got to this point and the current status of the Grendel lineage.  Wagner’s art is fascinating throughout this segment, with deep black silhouettes that remind me of Miller’s ‘The Dark Knight Returns’, appropriate for the weird cyberpunk future.

All in all, Grendel: Devil’s Odyssey #3 is impressive work, taking some familiar science fiction tropes and making them feel fresh and exciting thanks to excellent, detailed art and some deceptively simple twists on the formula, earning 4 out of 5 stars overall.  If you’ve never read an issue of Grendel, you might need to do a little background research for it all to make sense in context, but even if you’re uninformed, it’s well-drawn, well-written and interesting comics.

I have to go back and re-read the first two issues now, and I'll be looking forward to the next one... This is a good book.