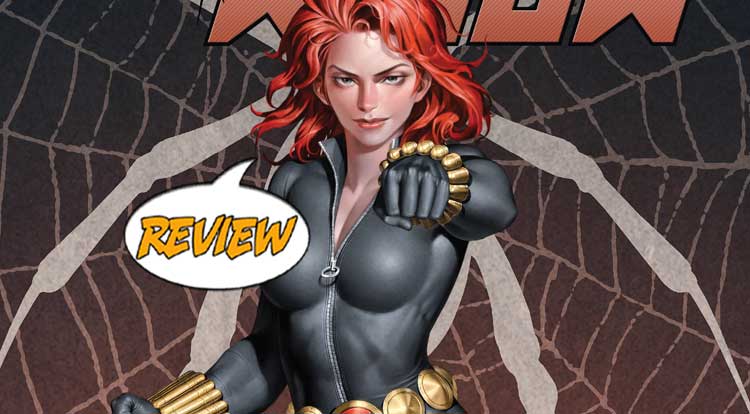 Black Widow is ready for a showdown with an enemy that wears her own face!  Your Major Spoilers review of Web of Black Widow #5 awaits! Previously in Web of Black Widow:  The Black Widow has always worked best alone – but now she’s more isolated than she’s ever been.  The enemy masquerading in her clothes is finally ready to spring the trap.  All this time, Natasha thought she was hunting prey she had helped release…

But the real predator has been stalking her.

So, after her death at the hands of evil Captain America during ‘Secret Wars’, Black Widow was cloned by the Red Room into a new body.  But her memories didn’t all come along for the ride, leaving Natasha in a strange situation where in she can’t even trust her own friends.  What’s worse, they don’t trust her, leading to a number of ugly confrontations and one arrow to the side from Hawkeye.  As this issue opens, the mastermind reveals herself and her plan: she wants to revitalize the Red Room and use it for her own mercenary/assassin efforts.  Of course, she’s dealing with the greatest spy in the world, so when Anya’s villain monologue is over, Natasha thanks her for the information and asks Iron Man if he got all the information that he needed.  Anya’s scheme unravels as she makes a run for it, bumping into Hawkeye, The Winter Soldier, even Yelena the other Black Widow discovering that she isn’t nearly as sneaky as she thinks she is.  The Black Widow chases her down and strikes the final blow against her would-be successor (with a little help from Captain America) before getting her memories rebuilt, thanks to a little assist from Iron Man, a process that should return her to her old self in no time.

This is an interesting final issue of a more traditional miniseries, in that it’s whole intent seems to be to take The Black Widow back to her roots and metaphorically put all the toys back in the box for the next creator.  On that level, it works, and it is quite satisfying the way this issue reveals one-by-one that her friends aren’t actually against her at all.  The problem for me comes in the art, which is very “scratchy”, especially as regards faces.  There is a tendency for assymetrical and sketchy features for everyone, and a battle between identically clad Anya and Natasha makes is hard to follow who’s who.  There’s an image inducer in play, so I think it’s *supposed* to be confusing, but the storytelling choices make it nearly impossible to follow the action.  I also have to mention that the facial expression of Black Widow on the cover makes her look slightly demented and really goofy, which almost turned me away from buying the book.  It’s a minor point, but a very real one for comic buyers.

I read the first couple of issues of this story and was quite lukewarm about it, but this final issue wraps it up well, even paying off on the seeming betrayals by the Avengers in previous issues.  Even though Web of Black Widow #5 doesn’t quite stick the landing, the successes of the story and the dialogue (and a couple of really amazing shots of Iron Man) pull out 3 out of 5 stars overall.  I’ll be interested to see where Black Widow goes from here and if this story completely erases the whole clone storyline entirely, as happened previously with Iron Man and Captain America’s recent big twists.

There are some art and story-telling issues that make it difficult to follow, but the parts that work wrap the book up pretty nicely.