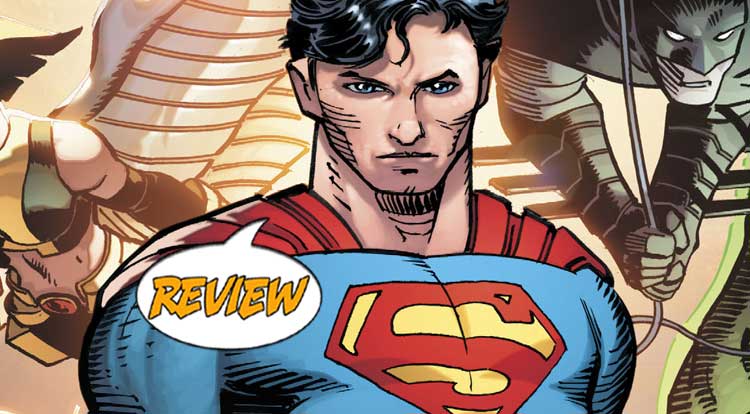 Can even the combined forces of the Justice League and Young Justice turn the tide for the Man of Steel?  Your Major Spoilers review of Action Comics #1018 awaits! Previously in Action Comics:  War and chaos strikes the heart of Metropolis.  The Invisible Mafia, Lex Luthor, and the Legion of Doom all stand their ground to take over Metropolis.  Will even the combined forces of the Justice League and Young Justice turn the tide for the Man of Steel?

This issue opens with utter chaos, as The Legion of Doom and the Justice League clashes in Shuster Park, right in the middle of Metropolis.  The battle mostly off-screen, though, as cut away to The Red Cloud, watching from a nearby rooftoop, which transitions to the origins of the Red Cloud.  Six months ago, Robinson Goode tracked down leads on a missing scientist, only to have one of their colleagues bash her on the head to try and hide some nefarious doings.  When she came to, she was exposed to strange extradimensional radiation that turned her into the misty crimson form we’ve been seeing since issue #1001 or so.  She then killed the scientists, destroyed the lab and set off into the world, leading to her current position as enforcer for the Invisible Mafia.  Her presence distracts Superman enough for Luthor to get in a good shot, leaving the Man Of Steel down for a moment, during which he coordinates evacuations with Fire Chief Moore.  We then get her recollection of how we got here, with Superman revealing his identity to her before the rest of the world, even agreeing to her request to endorse her in her new quest to become the mayor of Metropolis.  Her story also reveals the biggest surprise in the issue: The arrival of the Legion of Doom came with their newest member… Leviathan!

As someone who hasn’t been impressed with much of the ‘Year Of The Villain’ stuff to date, I have to admit, this issue works for me.  Granted, having JR Jr. drawing a giant super-battle helps, but the centralizing of Red Cloud and Chief Moore this issue helps to ground the conflict and make it all feel much more real and consequential.  It’s ot that ‘Justice League’ hasn’t had similiar moments of brilliance, but many of the crossovers and tie-ins have made ‘YOTV’ a really depressing slog of a tale, yet another “everything you know is wrong, the villains are winning” grim tale, and DC has had more than enough of those in the last few years.  By contrast, this issue makes the enmity between Superman and Luthor personal, and the Leviathan reveal is well-handled, once again tying it all together into the ongoing Superman world.  Bendis narrates the chaotic first part of the story not with caption boxes or thought balloons, but with a series of Twitter-style social media blurbs.  This allows them to convey tons of information from multiple sources without ever cutting away from the action.  And the action is good and good-looking.  This issue’s cover had me worried a bit, as it’s figures feel stiff and the faces sketchy, but the interiors by Romita and Janson are excellent.  In fact, the facial expressions during the reveal to Chief Moore were complex and really well-done enough that I’m now invested in her mayoral success after having no real interest in her previously.

In short, Action Comics #1018 is an issue that works perfectly even if you haven’t read the build-up to it, with strong art throughout, a couple of important questions answered and a moment that will hopefull lead to the next Super-era, earning 4 out of 5 stars overall.  It’s nice to have a comic book that works as a single satisfying chapter, even though it’s part of the big giant cosmic crossover and heavily steeped in ongoing sub-plots and lore.  That’s an achievement in itself.

Two perfectly executed flashbacks in the midst of an ongoing chaotic battle, with excellent art and a perfectly timed final page reveal make for a really good read.