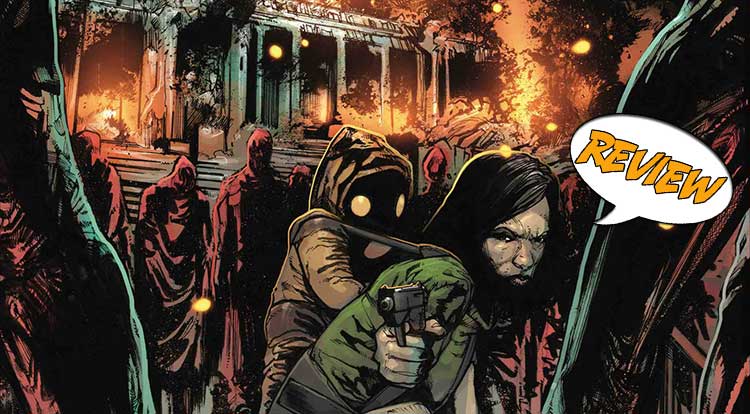 The battle for survival heats up in IDW Publishing’s Pandemica #3 as the revanchist forces of white America ramp up their efforts to commit genocide against ethnic minorities, while special forces operatives De and Chick uncover a laboratory of horrors.  Who lives and who dies?  Find out in our Major Spoilers review! Previously in Pandemica: Minorities in America have begun to die in their multitudes caused by diseases intrinsically linked to their ethnicity.  The authorities dispute there is any pre-mediation in the spread of the diseases, while racist elites celebrate their imminent retaking of America.  Eminent scientist Doctor Katz has recruited scientists and investigators to hunt down a cure and the people responsible for instituting a reign of terror against minorities.  With the numbers of the dead mounting, the forces of white supremacy begin to make their move.

Jonathan Maberry (V Wars) is a one man writing machine, pumping out books (Dead of Night), television scripts and comics (Highway of the Dead) that dominate the horror field.  His latest series, Pandemica, taps into the deeply partisan politics of America today, and adds an extra special spice of ethnic genocide to make the taste even more unpalatable.

Using a variety of genetically targeted bio-weapons, an underground group of American white supremacists have begun a process of ethnically cleansing America.  The numbers of the dead have begun to mount as epidemics sweep the nation, while commentators on cable bicker over who is to blame and why.  The racists are depicted in their full glory, using terms like ‘fake news’ and ‘fake scientists’ to demonise characters like Doctor Katz, who are frantically working to locate the source of the diseases and find a cure.

Pandemica #3 is a deeply cynical book, or at least, Maberry is prepared to use all the language of racists and those dismissive of politics to get his point across.  Words like ‘aryan’ and ‘parasites’ are used freely to demonstrate the depths these monsters have descended to to justify their actions and ‘cleanse’ America.  There’s a real feeling here that Maberry is deeply despondent about the direction America has taken over the past few decades, and is prepared to vent his anger in a manner that taps into all the darkest corners of the American psyche.

NOW IS A TIME FOR MONSTERS

The good guys, in the shape of De and Chick, are little better than their adversaries, insofar as that they are prepared to use maximum violence to achieve their goals.  In a sense, though, it takes a monster to kill a monster.  Maberry demonstrates the high stakes involved by portraying characters willing to kill and maim to find the evidence to bring down the white supremacists.  In a flashforward, when we see the awful nationwide effects of the epidemics, De and Chick come face to face with each other.  One is prepared to risk all to save the remnants of humanity, while the other is willing to kill their former partner, also to save humanity.  As the screws tighten, there is little room for error.

While Maberry has drunk deep of the poisoned well of American conspiracies (purely for the purposes of writing Pandemica #3), artist Alex Sanchez and colorist Jay Fotos have brought their A-games to depict the end of civilisation.  They spare no effort to depict the horrifying ravages of the multiple diseases raging raging across the nation, with Sanchez’s organic, looser art style perfectly mimicking the corruption of the flesh.  Fotos doesn’t spare any effort to depict wounds and suppurating wounds.  Both really present a masterclass in portraying humanity in all its grossness.

While Pandemica #3 is pure fiction, it is a warning siren of where America is heading if something isn’t done to drain the poison from politics.  A former President once said that the arc of history bends towards justice, but it feels awfully like there are people actively taking a hammer to that arc to change the course of America.  Unlike this series, there is still time for America to find its better nature once again.

I’ve said it before and I’ll say it again but America feels very much like it is walking along the edge of a precipice.  Partisanship has gotten worse, and social media has added fuel to the fire.  Pandemica #3 cherry picks all the nastiest racist tropes and memes about race cleansing and parasites to add a scum of believability to the abhorrent actions being undertaken in the name of racial purity.

Pandemica #3 isn’t an easy read. The racism on display, the grossness of the effects of the epidemics and the violence all add up to a terrible indictment on humanity. Some might think that the apocalypse unleashed by the racists is a deserving punishment for the vanity of humans and their ongoing ability to plumb the depths of depravity. There is a glimmer of hope at the end of the issue, but if Maberry’s previous work is any guide, it’ll get pitch black before there’s any chance of redemption.