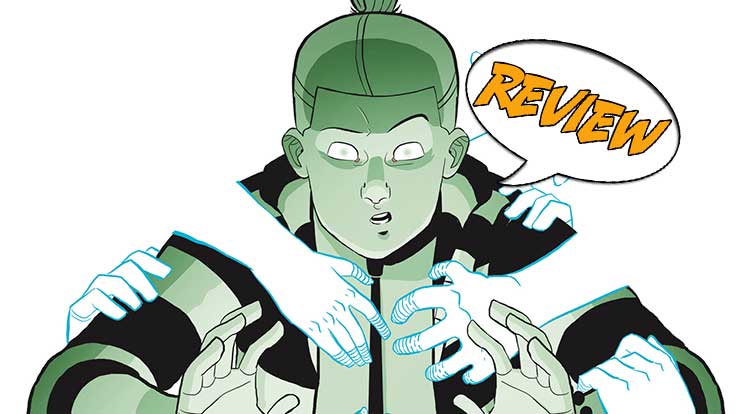 I Can Sell You A Body #1 Review

Denny Little, a former TV psychic, has money trouble, mob trouble and girl trouble. Can his power to speak with the dead get him out of trouble? Find out in “I Can Sell You a Body” #1 from IDW Publishing! Previously in I Can Sell You a Body: Denny Little is an honest-to-gosh psychic who has big plans and big money problems. He can bring the dead back to life, provided he can find a body to put them into. But somehow things are not going quite as he expected

A TWIST ON THE PSYCHIC WHO TALKS TO THE DEAD

I wasn’t sure what to expect from a book with the title, “I Can Sell You a Body” #1. Something about grave robbers, perhaps? Instead, I was intrigued to find this a crime story with a strong dose of the supernatural and a touch of humor to lighten the heavy stakes.

Denny Little is a psychic who was famous on TV, at least for a little while, but as the book opens, he is in LA quibbling with a street vendor over the price of a hot dog. You’d think the psychic business would be lucrative, even if he is a fake. But it turns out he isn’t – he knows something secret about the vendor’s dead cousin and gets his dog for free. With powers like that, it seemed like Denny could be off on a major crime spree, blackmailing his way merrily across the country.

But no, he has an office, and he’s late for an appointment. It’s a young woman who comes to Denny to talk to her dead boyfriend. She wants to call it off and move on. Denny has more lucrative ideas and talks her into coming to see him weekly. Yeah, he’s kind of sleazy. But as soon as she leaves, two toughs show up, punch him in the face, and drive him away. He’s taken to be threatened by Mr. Gallo. He’s apparently made a deal with Gallo to perform a “reverse exorcism” on his father to the tune of a hundred grand. (There’s a cute interlude, in the form of a late-night TV commercial, to explain reverse exorsisms to us.)

Mr. Gallo dumps him off with forty-eight hours to find a body for dad and bring him back as well as pay back the money. Somehow Denny has burned through most of that already, and apparently bringing people back is a new power he’s developed, and he doesn’t fully understand it yet. But he can speak with the dead, so he goes looking for Gallo. This is delightful, as when he starts talking with the dead, he attracts a crowd, all of whom want to come back. To make matters worse, Gallo was not a good man in life, and the spirits in the afterlife want to keep their hands on him and get their revenge.

Denny attempts to forcibly pull Gallo’s spirit back to the world and shove it into his secretary, Gladys, who is on the verge of quitting. There is no indication his attempt worked; Gladys merely threatens to sue him for the pay she is still owed. And then a woman walks into his office and into his heart. Denny falls in love. Henrietta is in dire straits – she has no money and is counting on an inheritance from her uncle, but she cannot locate it. It turns out he gambled the money away. Denny, smitten, gives Henrietta his remaining money, so now he’s on the hook for even more.

The art of “I Can Sell You a Body” #1 is crisp and stylish, and not without a certain amount of humor. I like the character design. Denny is cocky and arrogant, just confident enough to put on a convincing veneer of success even while he’s plainly making bad decisions right and left. He wears a little man-bun and when he’s outside, he has dark sunglasses. It gives him just the right amount of sleaze.

The art makes use of very black shadowed areas. At first it looked a little funny as everyone has black patches on the face due to nose shadows. But within a page or two, I got used to it. I like the black shadows better when it’s emphasizing bigger shadows. Having Denny’s whole face, or even body, in shadow is dramatic plus it emphasizes the darkness people associate with someone who talks with the dead. The shadows also fit the scenes with young Gallo and his thugs.

If you think you might dig a haunted crime thriller, take a look at “I Can Sell You a Body” #1. Denny is no saint, but he’s not utterly cold-blooded, and the idea of reverse exorcism looks like it has the potential to cause any number of interesting complications.