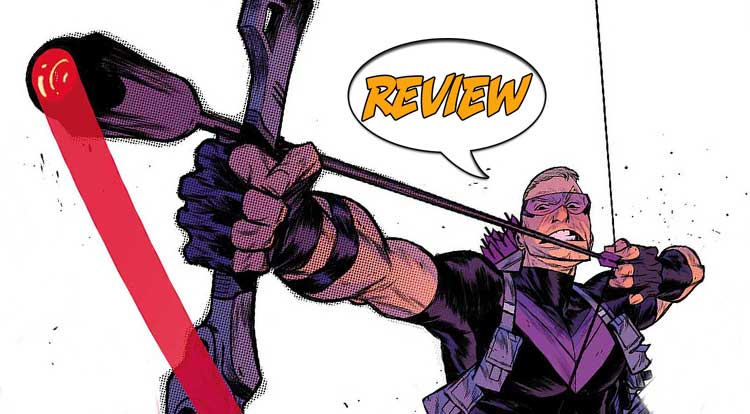 Clint Barton used to be Ronin… so who’s using his old costume for a life of crime? Your Major Spoilers review of Hawkeye: Freefall #1 from Marvel Comics awaits! Previously in Hawkeye: Freefall: When a mysterious and ruthless new Ronin starts tearing a destructive path through the city, suspicion immediately falls on Hawkeye, but Clint has more to worry about than who’s wearing his old costume. After a clash with the Hood ends badly, Hawkeye gives himself a new mission that will place him in the crosshairs of one of New York’s most dangerous villains. Hawkeye’s mission and Ronin’s secret plans will set them on a collision course that only one of them will walk away from.

A MYSTERY, A CRIME-LORD AND A TWENTY DOLLAR OMELETTE

As this issue opens, we are in a skeevy warehouse somewhere in New York City, as a group of thugs, ne’er-do-wells and criminal folk assemble for a potential job. The Hood quickly appears and begins to outline his deal for these new employees, only to recognize one as Hawkeye. A fist-fight breaks out, and all the nefarious folk are taken into custody by the NYPD, with Hawk getting in a few snide shots at The Hood as well go. Smash-cut to some time later, as he sits in a courtroom, anticipating The Hood’s arraignment, only to find that the villain has been released, with an APOLOGY from the city of New York. A tense, unpleasant confrontation occurs between Hawkeye and The Hood, and not long after, a group of government agent is attacked by someone wearing the costume of Ronin. The Falcon and The Winter Soldier arrive to talk to him, good-cop/bad-cop fashion, but Hawkeye doesn’t know anything. The trio of heroes end up going on stakeout together, but when Ronin arrives, he easily out-classes all three Avengers, leaving them beaten and bruised in the streets, after which Hawkeye retorts, “Told you it wasn’t me.”

First and foremost: This issue makes Hawkeye wants to follow in the footsteps of the Fraction/Aja Hawkeye series of a few years ago, but can’t quite nail the tone of the dialogue, instead making Clint thoroughly unlikeable throughout. Even when he rightfully calls The Hood an idiot, it’s off-putting, and the inexplicable antagonism between Hawkeye, Falcon and the former Bucky feels entirely of his making. There’s a fine line between the self-destructive, but still aware behavior and dialogue of the earlier series and just plain juvenile posing, and this issue falls too often on the wrong side. Otto Schmidt’s art is more successful, especially in its rendition of Ronin, but there’s an indistinctness to the linework that works against the story. The Falcon, for instance, has vivid red-and-black coloring, but his wings/armor assembly never quite looks hard-edged enough to be mechanical, and some of the blocking of the combat sequences doesn’t seem to follow the laws of physics. In the final analysis, it’s okay art, but there’s nothing that really makes it stand out, although he draws a pretty cool-looking Hood.

BOTTOM LINE: THIS IS… KIND OF INSUFFERABLE

Sadly, the combination of grating dialogue/character work, indistinct art and a villain who I thoroughly dislike makes Hawkeye: Freefall #1 a disappointing issue that still earns a right-down-the-middle 2.5 out of 5 stars overall. Fans of Hawkeye’s recent feckless persona may still find enjoyment in these pages, but I just don’t want to read a book that makes the main character actively distasteful. Protagonists don’t have to be saints, or even be likeable, but this issue just makes me dislike Hawkeye and want to avoid him.

Interesting, but undistinguished art and dialogue that makes me dislike the main character combine for a hard-to-read issue.