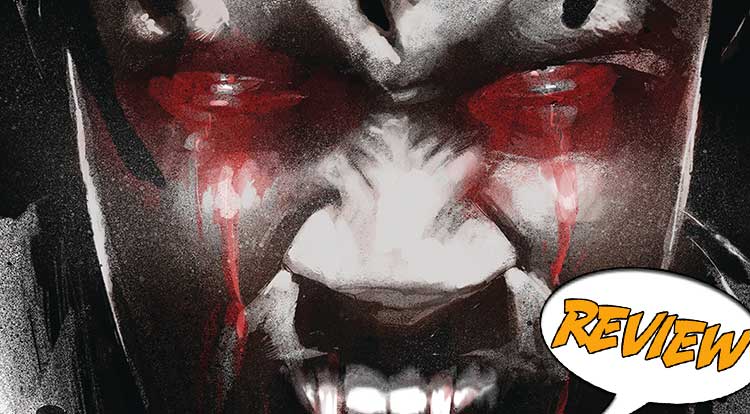 A homicide detective, his son, and a medical examiner find themselves caught up in a vampire plot that extends back to President John Adams. Intrigued? Find out more in Killadelphia #2 from Image Comics! Previously in Killadelphia: Jim Sangster, Jr., a beat cop, comes to Philadelphia for the funeral of his father, who was on the police force (homicide) in Philly. The two of them did not get along; the earlier death of Jim’s mother drove them further apart. But Jim finds and reads his father’s journal, which tells of an investigation strange beyond belief. He and the medical examiner had found bodies covered in human bite marks, often drained of blood, and always with yellow fever present. Jim finds Jose, the medical examiner, and she talks with him more and lets him observe at midnight, when the dead in the refrigeration unit get up and start pounding on the door. Jim connects the dots, returns to his father’s grave, and digs him up, to find him waiting for him.

AN INTERESTING ANGLE FOR A VAMPIRE STORY

Killadelphia #2 opens in a hospital. The patient is Miss Estelle, an older black woman, who is talking to her nurse late at night, telling her some of her life story. She hasn’t had an easy life. Her daughter became hooked on narcotics, and I get the sense that she is dead. She talks a little of her grandson, Tevin, and that name tweaks a memory of one of the vampires in the first issue. Indeed, after the nurse steps out, Tevin comes in through the window. Estelle is in pain; Tevin tries to talk her into letting him take her pain away and give her all the time she could ever want. In an incredibly moving moment, she turns him down, telling him that life is supposed to hurt. If you never do anything wrong, if you never experience pain; you cannot learn. And her belief is solid that you only get the life you get. What you do with it is up to you.

Jimmy talks Jose into coming back to his dad’s place even though she is busy. James is there. And I love this scene. They don’t waste time talking about how impossible vampires are. Jose examines James and makes her observations as they all talk about what’s going on, and ask intelligent questions, such as will James hurt them? He, too, for now has kept his analytical mind. He wants blood (Jimmy did think of bringing blood from the morgue along for him) but feels like he can keep his craving under control. He can feel a connection to John Adams, and he knows that Adams is their Patient Zero, and he’s been busy making vampires.

There is so much reflection here about power – who has the power, and how you can use that to manipulate people. There is unrest in the city as funding is being cut for the people who need it most. Their anger, a TV announcer says, is pointless as it becomes weaponized as fear in the eyes of the elite, and that’s a situation that puts democracy at risk. Against this backdrop, hidden, is Adams. James believes he’s also playing people. He has a security force built from the best soldiers he’s been able to find in the past two hundred years, and the vampires he’s creating now are the distraction, the expendable ones.

We see the vampires at work as they catch another victim – someone who was not a good person, but still. The vampire who lured him, a young girl named Brittany, torments him until John Adams arrives. We see Tevin’s role, in charge of the new potential recruits, who have to choose between joining Adams, or being food. And James leads Jimmy and Jose in their first step – to kill again the dead bodies in the morgue. This is a book rich in difficult decisions for characters and so resonant with the situations of today.

I love the art of Killadelphia #2. As it is meant to do, it draws the eye to the important parts of a scene. It does this with a variety of techniques. Certainly, there are facial expressions of pain, of cunning, of fear. But there are panels where part or all of the background drops out completely so our entire focus is momentarily on one individual or one item. Other panels have a brushed out technique along an edge or a quadrant, even to the point of having a character fade out. It isn’t something I’ve seen a lot, and for me it gives a sense of both the pressures of time and a sense of how our peripheral vision isn’t always complete.

The horrifying scenes are horrifying without being explicitly graphic. We see the slow and inevitable buildup to a violent moment, and the frame just before everything happens, so when we see the follow up splash of blood on the wall, or an even later aftermath, we know perfectly well what went down in between and the imagination fills it in.

Killadelphia #2 is a thoughtful take on a familiar horror idea. Rooting the plot in history and having the vampire play the long game gives this story an additional level of danger and connecting it with racial tensions and the desperation of the poor makes it all the more visceral. The addition of the vampire detective – who may well have limited time before he is lost kicks the drama-factor up high.

A vampiric plot stretching back over two hundred years is coming to fruition.