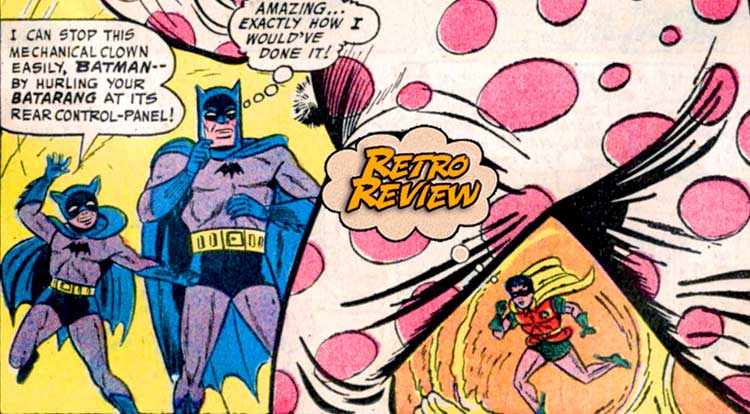 And now the cruelest parents ever known… at least in terms of naming conventions.  Your Major Spoilers (Retro) Review of Batman #108 awaits! Previously in Batman:  Though Dc has, for many years, credited Bob Kane as the creator of The Bat-Man, he worked with other uncredited creators, including this issue’s primary writer, Bill Finger.  It was Bill who suggested the color scheme of the costume, the trademark cowl, even the name “Bruce Wayne” came from Bill’s suggestions.  He also transitioned Batman from the vigilante that Kane envisioned to the world’s greatest detective, and was the first writer to write both The Joker and Catwoman, though who created what is still debated in that case.  Bill was also the origin of the “Batman and Robin fight in a room full of giant props” trope, which is one of the most charming parts of this weird pre-Silver Age Bat ephemera.  This issue begins with a quick story set during the monstrously popular quiz shows of the day… Ironically, the story hinges on a contestant being given a rigged question by a corrupt host, presaging the real game show scandal that would be a little more than a year later, as dramatized by the movie “Quiz Show,” meaning that Batman figured it real-world crimes before anyone actually knew they had occurred!  The second story is cute enough, featuring a Batman trapped in the Bat-cave and a cameo appearance by Gary, The No-Trash Cougar, before transitioning to the feature presentation (in these days the cover story was often the last presented, rather than having a lead and a “back-up” feature), which introduces the teenage dynamo, Batman Jones! I really want B.J.’s bike, even though I haven’t ridden anything two-wheeled regularly since the 80s.  As for the boy himself, he was named for the Caped Crusader after the hero saved his parents, which served to make him a media sensation who grew up a little bit obsessed with his namesake. The sight of the real Bat-Signal brings both Batman and Jones running, and rather than let the young boy run into danger unsupervised, Batman grudgingly takes him along on his investiagation.  He patronizes the lad, telling him to go out and play, only to have Batman Jones discover the key evidence that leads him to bring in the perpetrators.  Worried that success would put Jones in even more danger, Batman brings him to the Bat-Cave, and begins quizzing him about what to do in certain situations.

Batman Jones proceeds to get his quizzes all correct.  (Do ya think the host slipped him the answers?) Batman asks Mrs. Jones to forbid Bat-Jo from leaving the house in costume, an edict which he skirts by wearing his costume under his clothes when he sneaks out to investigate another crime at the downtown hobby show.  As with all hobby shows, it features giant replicas of cash registers and power tools.  (If your hobby shows don’t have those, you are going to the wrong hobby shows, Faithful Spoilerites.)  Jones is distracted by a book of stamps (Foreshadowing: Your Key To Quality Literature!) but hides in the hall until criminals arrive after close to use the actual, working power drill to cut into the bank next door! Fortunately, Batman Jones’ momentary fascination with stamps proves to be his new obsession, as Robin reminds us that children have short attention spans.  Seeing as how he’s around 12 in this issue, it’s kind of a hypocritical statement, but it proves true, as Batman Jones was never seen in costume again.  Of course, that’s until Grant Morrison reads this Retro Review and finds the springboard for his new Black Label 12-issue prestige miniseries.  Batman #108 is a very charming book, with no real misfired or false notes, featuring three boilerplate Batman adventures that are clever, energetic, and full of big, square Moldoff jaws (the best kind of Bat-jaw), earning a well-deserved 4 out of 5 stars overall.  There’s a peculiar charm to these fifties Bat-adventures, and I, for one, am glad that DC is no longer too embarrassed by them to admit their existence.

It isn't the Dark Knight, but it is pretty wonderful, with clever story, consistent art, and the requisite giant props. What's not to love?