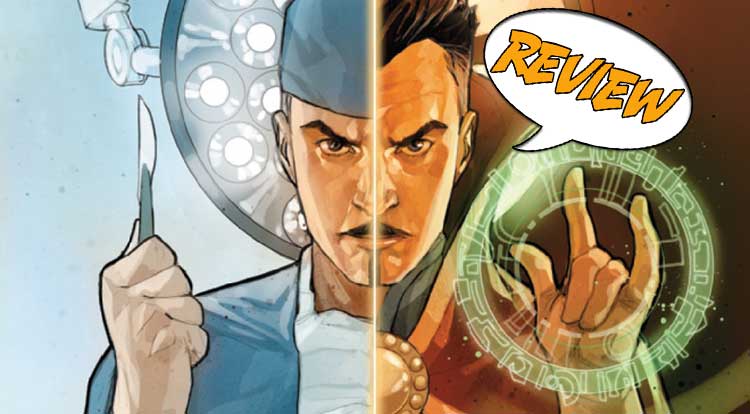 Stephen Strange is back in the operating room.  But can he manage to balance his hippocratic oath and his duties as Sorcerer Supreme?  Your Major Spoilers review of Dr. Strange: Surgeon Supreme #1 from Marvel Comics awaits! Previously in Doctor Strange: Surgeon Supreme, The impossible has happened! Doctor Strange’s hands have been healed, restoring his surgical skills – but now he’s being torn between his obligations as the Sorcerer Supreme and as a neurosurgeon.

The Doctor Is In

Doctor Strange: Surgeon Supreme #1 begins with a cancer patient being consulted by Dr. Strange. He has a tumor so severe that no other surgeon will touch.  Stephen assures him that he can handle it.  Next up is a brief montage where Dr. Strange retells how he came to be the Sorcerer Supreme and how he has returned to the medical field. Stephen then has a meeting with a hospital official who informs him that a new dean will be starting the next day, Anthony Ludgate, who Doctor Strange believes to be dead.  The meeting is interrupted by a code blue and the hospital is flooded with patients.  Doctor Strange learns that there’s a disaster in progress that is sending all the patients to the hospital.  He dons his superhero outfit and sets out to investigate.  There he’s confronted by The Wrecker who has seriously upgraded his powers and quickly overpowers Doctor Strange.  The issue wraps up with Stephen, wrapped in rebar, sinking into the Hudson Harbor.

First things first, I really like how Doctor Strange is characterized here.  We get a really confident, nearing arrogant, Stephen but it’s not overbearing.  Mix that with his stated disdain for the business of medicine and the bureaucracy of hospitals and what we have here is a House M.D. sort of situation. Couple all of that with the mystic elements going on and it’s a pretty fun cocktail. Unfortunately it’s the stuff happening around that that isn’t so great.  The last part of this issue has a pretty uninteresting fight where the villain gets the upper hand but instead of finishing things off in a decisive way, goes the route of a Bond villain.

The art in Doctor Strange: Surgeon Supreme #1 is very nice.  Kev Walker manages to seamlessly go from personal one on one situations, to operating rooms, to montages, to destroyed cities, to magical fight, without any of it faltering. The facial expressions are just cartoonish enough to be fun without being silly, and the use of light sources is spot on.  They even manage to make The Wrecker seem imposing and truly menacing, which is an accomplishment in itself.

The Bottom Line:  A Unique Approach To An Old Character

Mixing Doctor Strange with a hospital drama seems like an obvious choice and they manage to pull it off here in the first issue. Mark Waid has managed to put this character in such a situation that seeing how Stephen Strange battles the healthcare industry is just as interesting, if not moreso, than fighting baddies with magically enhanced crowbars. Add in a decent montage and engaging art, I think you have a solid book for both old time fans as well as new readers. 4 out of 5

Doctor Strange: Surgeon Supreme #1 is a good place to jump in for those who are unfamiliar with the character or who are looking for a little more than just punches and kicks from their superhero books.