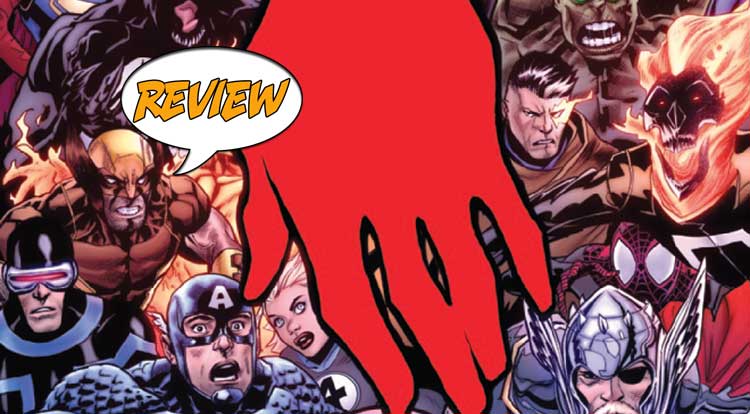 A single act of violence ripples out and touches nearly the whole of the Marvel Universe and the motive may lead to Earth’s doom. Your review of Incoming #1 from Marvel Comics, awaits! Previously in Incoming:  A mysterious murder brings together the heroes of the Marvel Universe in the search for a killer – but no one can imagine where the trail will lead, or how it will affect everything.

The Gang’s All Here

Incoming #1 begins with The Masked Rider having been drawn to the scene of a murder. He quickly realizes that he is unable to solve the murder. It just so happens that Daredevil and Elektra are training nearby. He gets their attention, by shooting at them.  Once they arrive he informs them what’s happening and leaves.  Daredevil isn’t able to get much further, so he calls Jessica Jones.  She discovers a word “2Faced” and a series of numbers that ends with a Hala star. She calls Captain Marvel.  Then what proceeds is one character going to the next for another piece of the puzzle and then referencing others who may know something.  It ultimately leads the heroes to realize that the numbers hide a code “Beware The Trees”.  Before they can act though their prime suspect is killed leaving the heroes with more questions than answers.  The issue wraps up with a scene showing a unified Kree/Skrull empire preparing for their attack on Earth.

Not What I Expected

The best way to describe Incoming #1 is that it’s a recap of the Marvel Universe strung together with a paper thin plot. Basically the murder plot is only there to facilitate a way for all these characters to interact and then layout what they’ve been up to recently.  About midway through the issue the plot is basically dropped and each character is introduced via vague reference. At its core this is a reference guide. A primer for the coming year. Even though it does introduce the next big event, it does so almost as an afterthought.  To its credit, this is a clever way to keep readers up to speed with the going ons of characters they may not be following.

One of the coolest things that Incoming #1 does is that it brings in the art teams for each of the characters solo titles to draw and color their little vignettes.  Sometimes it’s easy to forget how much artistic variety Marvel has and this is a nice way to see it all in one book.

The Bottom Line:  Little More Than A Recap and Brief Tease

There is a plot here, but it’s not the point of this book.  The whole reason Incoming #1 exists is to bring readers up to speed for the Marvel Universe as a whole and in that way it’s effective.  Other than that, it’s not really interesting and sometimes the writing suffers in order to try and force information. If you’re not currently reading a lot of books from Marvel, this seems like a decent way to get a working knowledge of what’s happening outside your normal reading.  3 out of 5

Incoming #1 is little more than a recap of the most recent storylines going on in The Marvel Universe. It’s nice to see all the art on display, but there isn’t much story here.