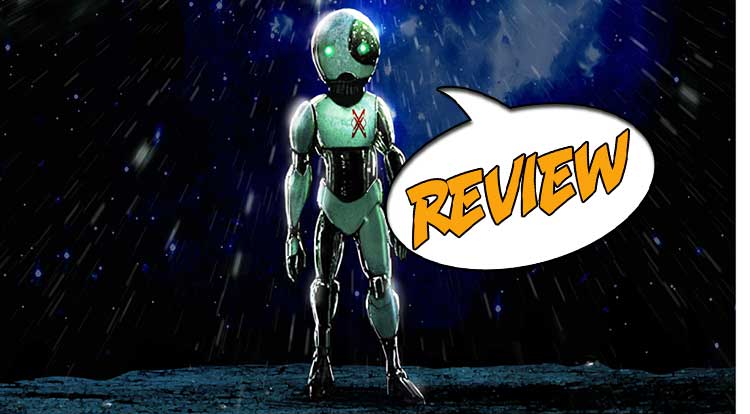 Four robots, sentenced to serve punishment together, must insure they all stay alive or they will all die. The story starts here in THE KILL LOCK #1 from IDW PUBLISHING. Previously in THE KILL LOCK: It is a world where robots are common place, and treated just like anyone else, even when it comes to breaking the law. Such is the case with four very different robots. They each committed a crime and now they are being punished for those crimes. A laborer, an engineer, a soldier and a child; four robots who must live or die together. Their story begins here.

A HEART IS NOT JUDGED BY HOW MUCH YOU LOVE…

A lone droid walks into a bar. No, it’s not the beginning of a joke, but of a tale. Walking across a snow-laden waste, a caped droid walks into a bar to find another droid having a drink. The first droid is slight and thin, with a peculiar rectangular shaped head with a glowing eye in the center. The other droid is large and rotund, with the face that resembles a stuffed bear. The smaller droid looks at the other for a moment, then insults the larger droid. His face, the smaller droid tells the large, is the most e’ffed up face he has ever seen. Taken aback, the insulted droid tells him that the face is of standard design for the rock mining division of this planet, and he just wants to sit and have his drink. THe smaller introduces himself an an engineer, Artisan class. His kind designed the innards of the other, and the Artisan says he can see into him. With but a touch, he paralyzes the voice chip of the drinking robot. Then, looking inside him, he begins to do things.

Artisan’s “work” is interrupted when another droid enters the bar. This one is large, with the dimensions of a body builder built filtered through geometry. He is a labor robot, and he is angry with the Artisan, telling him not to wander off again. With a threat, Laborer tells Artisan to get moving, leaving the defunct mining robot behind at the bar.

Outside they find the third member of their group, a small, slender robot with an innocent demeanor. He is looking at a damaged bird-bot. He refuses to allow Engineer to help the injured bot, as he knows that he should not trust the demented droid. He’s right. But when he asks Laborer why the Artisan does not go away, he is told that he has to stay with them. They all must stay together, and now it is time for them to go and locate the fourth member of their party, the soldier.

The smallest robot, the Child, wants to know what the Laborer meant. They Engineer tells him they all committed crimes and are being punished. The Artisan disassembled his co-workers alive and the Laborer was drunk and caused an accident on his shift. Now, as part of the punishment, they must work together or all die. If one dies, they will all die. The Solider arrives, having finished his prayers, and tells the Child that while one may be able to survive and live, four so different being cannot. It is believed they will not be able to work together, and will cause their own deaths. That idea is put to the test when scavengers arrive, intent on taking the group apart for profit. Will they be able to survive this or will they find their death sentences fulfilled? What about The Cure? Is it factual, or just the hopes of a condemned being?

LIFE IS ALL ABOUT FACING YOUR FEARS.

I picked this issue up with absolutely no knowledge of what it was about or the creator. I’m glad I did. This story is a work of love from artist/writer Livio Ramondelli (The Transformers, Battlestar Galactica: The Death of Apollo), and with lettering by the prolific Tom B. Long (Uncle Scrooge, Star Wars Adventures) and edited by David Mariotte, a long time IDW editor. In the pages after the first issue ends, Ramondelli tells that he had been working on The Kill Lock for several years in-between other jobs. He wrote and drew it with no knowledge of if it would ever find publication. He presented the whole thing to IDW, with whom he has been working with for around ten years on various Transformer titles, and they agreed to publish it. After reading it, I’m so glad they did. The characters, who are really only named by their designation, may be robotic but there is a feel of humanity in them. In fact, all of the characters, in this first issue at least, are robotic. After so many years working with Autobots and Decepticons, Ramondelli has no problem imbuing emotion and empathy into bodies of steel. You feel for them, or loath them, as you would any human or flesh based character.

There is plenty to enjoy and look forward to here. While the crimes of two of the cast are revealed you don’t know the details. As for the largest cast member, you know only that the Soldier committed a crime, and the flash back panel to it just makes you dread the revelation. The actions of The Child are a mystery, as even the Laborer says he was an innocent.

THE KILL LOCK has the feel of a haunting tale of redemption. There is an eeriness to the story that draws you in, and you quickly being to develop opinions about each character. This is difficult for some to do, even when the subjects are humans, but Ramondelli successfully achieves this with robots, and it adds so much to the experience.

THE KILL LOCK #1 is a lock to be added to your pull list.

THE KILL LOCK #1 is a tale which will catch you off guard, evoke emotions you were not expecting, and pull you into its narrative.