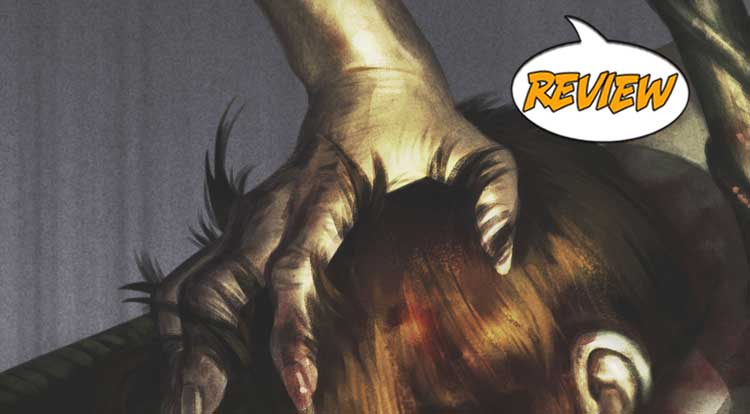 It’s a timeless holiday tale of a woman and her severed head that just *won’t stop* talking…  Your Major Spoilers review of Basketful of Heads #3 awaits! Previously in Basketful of Heads:  June Branch has been hunted, haunted, and desperate; she’s got an ancient Viking axe with mystical properties and a severed head in a basket that won’t shut up.  If she can’t make her traveling companion be quiet, maybe she can get some answers out of him… answers that might spell the difference between life and death.  But getting him to talk is one thing, and getting the truth out of him is another.

THE TENSION IS ALMOST UNBEARABLE

As this issue opens, we find June (who accidentally beheaded a criminal who was ready to kill her last issue) taking refuge from a raging storm in a gazebo with Sal (the accidentally-beheaded head of a criminal who was ready to kill June last issue.)  It’s clear that he’s not the brightest bulb, mostly because he keeps threatening her, even though he has no limbs, but Sal finally tells her the reason why the targeted her boyfriend and the Clausen house: A purported stash of cash found on the suicide victim seen back in issue #1.  June goes on the run with his head in a basket, eventually bumping into friendly Mister Hamilton who runs the local orchards.  Though a bit shocked to find her running around in the dark with an axe, Hamilton agrees to take her to the police to unravel the mystery once and for all.  As they travel, though, they find that the storm has brought down a tree.  Juney tries to clear it away with her newfound axe, only to realize at the last second that the lopping shears in her newly borrowed coat are covered with blood…

A SERIES SO GOOD, THEY ADDED AN ISSUE

This book, initially solicited as a six-issue mini is now officially seven issues, and I couldn’t be happier.  Every page just drips with fear and tension, and even Sal’s obnoxious, never-ending babbling doesn’t destroy that eerie feeling.  As soon as June met Hamilton, it was clear that something wasn’t right, but Hill’s script slowly and methodically reveals the truth of the situation, leading to the shocking last page reveal.  It’s hard not mention Joe Hill’s family when reading this book, but this issue reminds me not only of his work but of the best short horror fiction I’ve ever read.  Leomacs’ art makes great use of darkness and shadows to make June’s situation seem even more bleak and the storytelling is top-notch.  As she makes her way down the road, you truly feel the tension of her situation, and the story manages to make it clear that something is wrong without tipping the nature of the threat until it’s precisely time.

BOTTOM LINE: THIS IS EXCELLENT

Once again, Hill House pulls off a winner, as Basketful of Heads #3 provides excellent visuals, a well-plotted and suspenseful story and some truly inspired character moments (June and Sal’s discussion of how he can’t drown anymore is both mundane and slowly horrifying) making for a dead-solid 4.5 out of 5 stars overall.  Whatever is happening with the ancient axe, the real danger is clearly far beyond a few corrupt hick cops or an excaped work crew, and I for one can’t wait to see where this is going.

Killer art and a truly creepy story combine for an excellent reading experience. More of this, please.