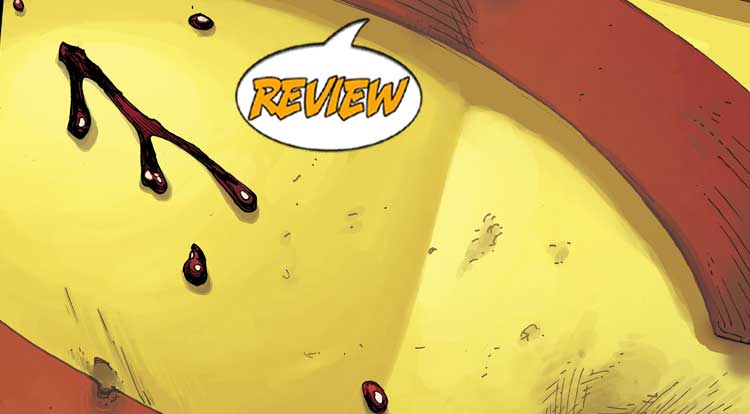 It’s the climax two years in the making: Superman Vs. Doctor Manhattan! Your Major Spoilers review of Doomsday Clock #12 awaits! Previously in Doomsday Clock: The final showdown between Dr. Manhattan and Superman shakes up the DC Universe to its very core! But can even the Man of Steel walk out from the shadow of Manhattan?

We open with the moment that this entire series has been building to: Superman and Doctor Manhattan, face to face in the streets, while the heroes of the world rally to defeat an attacker that they think is Superman. “I’m the one you’re going to destroy. Or I’m the one who’s going to destroy everything,” Manhattan intones, which… is actually the problem with the book. Batman and Rorschach have a deep conversation (with a rare admission of failure by the Bat), while heroes from other lands arrive to try and punish Superman. Then, Doctor Manhattan waves his hands, and everything ends… until it doesn’t. The Metaverse reforms and the story reveals that all of this has been taking place on Earth-1985. And then, Superman’s backup arrives, in the form of the Justice Society of America and the Legion of Super-Heroes!

Much like ‘Multiversity’ or the last issues of Final Crisis, much of the second half of this issue is expository dialogue and setup, establishing that the pre-Crisis multiverse (Earth-2 specifically) still exists, as does Earth-52 (which should be obvious) and each other reality, all designed to protect and preserve every era of Superman. The upcoming 5G line is mentioned as coming into existance in the year 2026, and the child of Marionette and Mime is established as an important figure, once again sent from his world to find a home on another one. There are some truly impressive moments here, and I’d be lying if I said that the sight of Superman, the JSA and the LSH leaping into battle together wasn’t impressive, and there are a lot of story hooks that could bring about some really great stuff for DC in the future. The problem comes in how long it took to get here, not just in terms of production delays or lateness, but in the fact that there was only about four issues worth of actual story in the twelve issues of ‘Doomsday Clock’.

I will say that Gary Frank did a wonderful job on the art this issue, which for whatever reason gives a much more textured and cross-hatched look, reminiscent of Joe Kubert, with no trace of the crazy-eyes problem that I’ve found in previous works. He makes the brand-new Legion designs look great, and the pages are full of cameos by characters like Tundra, Vostok-X and hordes of other guys that we haven’t seen in years. Plus, his Superman expressions do much of the dramatic heavy-lifting, especially when paired with Jon Osterman’s endless monologues. Doomsday Clock #12 is a solid climax and an improvement over the middle six-or-so issues, and while it doesn’t quite justify the entire run of the book, it sticks the landing well enough that future readers will find much satisfaction in the final chapter, earning a better-than-average 3.5 out of 5 stars overall. Had this book been able to get it’s central thesis in play earlier or perhaps been half as long, it could have been legendary, but at least it’s head-and-shoulders above ‘Before Watchmen’ in the unnecessary sequels department.

The only reason this was twelve issues was the Watchmen parallels, but the parts of it that work, work really well and give you the requisite goosebump moments. It's good to see the Legion and JSA back.