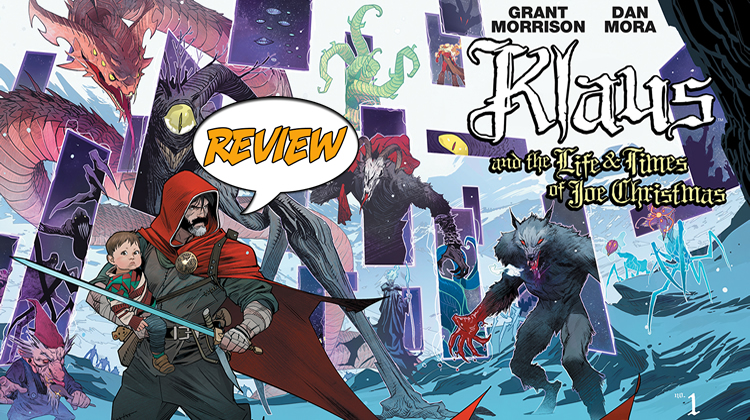 Klaus and the Life and Times of Joe Christmas #1 Review

It’s always great when something different really catches your attention. That’s what Klaus and the Life & Times of Joe Christmas #1 from BOOM! Studios is – touching and unique! Here is your chance to read our thoughts on the comic in this Major Spoilers review. KLAUS AND THE LIFE & TIMES OF JOE CHRISTMAS #1

SOLICITATION: * In the tradition of Grant Morrison ‘s 2001 New X-Men Annual , BOOM! Studios presents a widescreen comic that catalogs the life and times of one Joe Christmas.
* Abandoned as a baby, Joe Christmas is taken in by Klaus. In this holiday calendar-inspired comic, experience 25 all new short stories of Klaus teaming up with Joe Christmas over the years!
* Grant Morrison (New X-Men) and Dan Mora (Buffy the Vampire Slayer) return to the winter world of Klaus for an all new holiday special!

A HOLIDAY TRADITION I ALWAYS LOOK FORWARD TO

This time of year is steeped with traditions. I could mention probably hundreds or thousands of them, but the latest one I’ve added to the holiday season is the Klaus series of annual comics from BOOM! Studios. One of the best things is that it actually comes out BEFORE Christmas, a rare accomplishment for holiday-related comics.

So, just who is Klaus, the character this series is centered around? Here’s the description from BOOM! Studios’ website:

He’s a myth. He’s a legend. He’s loved worldwide by children and adults alike . . . but does anyone truly know the origins of Santa Claus? Set in a dark fantastic past of myth and magic, Klaus tells the origin story of Santa Claus. It’s the tale of one man and his wolf against a totalitarian state and the ancient evil that sustains it.

After the initial miniseries, there have been several of these, including Klaus & the Witch of Winter One Shot, Klaus & the Crying Snowman, and Klaus and the Crisis in Xmasville. I’ve enjoyed each one, so I was looking forward to this year, as always.

The first thing you notice about this book is that it is “widescreen,” as they call it—turned 90 degrees from the normal comic book. That means it’s wider than it is tall. It’s formatted like some calendars, and that’s on purpose. This one resembles the Advent Calendars that count down the days until Christmas. Each “page” is actually a double-page spread, so you get that calendar effect.

Another important point to realize is that there is no dialogue in the book. Zero. Nada. There’s a lot of implied dialogue—sequences when you clearly expect someone to be saying something. Again, though, like a real calendar, it’s all pictures.

The “pages” do count down the 25 days to Christmas, but the story follows just the opposite pattern. We start out with December 1, and Joe Christmas is at the age of 71, and he’s dressed up as a mall Santa in the year 2001. Each “page” shows us an adventure or a significant development in Joe’s life until the beginning, which I won’t spoil here because we get a sense that we know where Joe is headed, so we “know” him well. That touched me. A lot. All I’ll say is that the last “page” takes place in 1930. Then there is a “Happy Holidays” spread that has a cat in part of it, of course, which we see a lot of these days.

Mr. Morrison is leaning heavily on Mr. Mora in this issue because, as previously mentioned, there is no dialogue. Still, I’m sure he had a big hand in picking out what happened and what year it happened in. We see guest stars like the Beatles, and allusions to famous comic covers, including Uncanny X-Men #141.

The sad part is that, while Klaus is immortal, Joe is not. We see Klaus stay the same while Joe ages through the years. It accents the transitions we all are going through in life, and it is another moving aspect of the book.

Mora does a wonderful job of portraying the various “pages,” including a space adventure, times of war, and even the gentler life moments such as helping Klaus deliver Christmas trees.

I always point out that I evaluate art based on two fronts: action sequences and facial expressions. The challenge with this issue is to make each “page” tell a separate story while tying them all together into one life. Sometimes there’s a lot of action, and those illustrations worked superbly. I also liked Mora’s facial expressions, which clearly told us what was usually going on inside these people. Hey, he even got us to smile at a bunch of animals singing a Christmas carol, I think. Fun!

My brother is having trouble finding a copy of this issue, and I hope stores didn’t under-order this book. Granted, on December 26, the demand will plummet, but until then, I believe it’s a must-have and a must-read.

I hope this tradition will continue for years to come, with Morrison and Mora taking more creative chances in each new issue. Thanks to you both and BOOM! Studios for making this holiday season more special and more enjoyable! Cheers and a Merry Holiday Season to All!

I hope this tradition will continue for years to come, with Morrison and Mora taking more creative chances in each new issue. Thanks to you and BOOM! Studios for making this holiday season more special and more enjoyable!