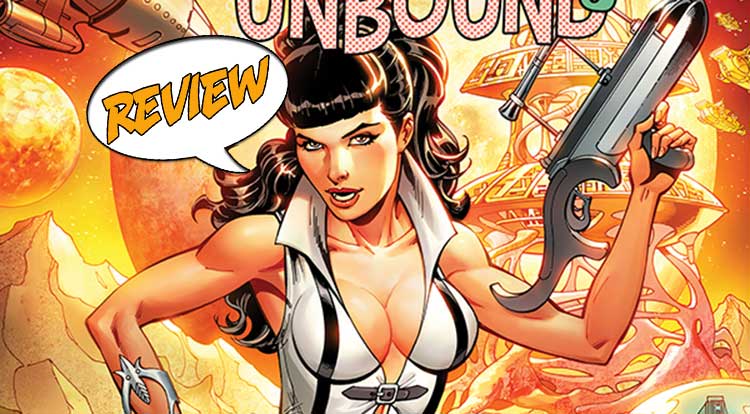 Bettie confronts herself, and not in a meta-physical way, as she learns more about the alien invasion in BETTIE PAGE: UNBOUND #8, on store shelves December 25th from Dynamite Entertainment! Previously in BETTIE PAGE: UNBOUND: While working on Project: Blue Book, Bettie Page has been exposed to many bizarre and wild adventures, but nothing seems to compare to this! After Colonel McKnight disappears and she receives notice that the Project has been shut down, she beings to dig deeper. Refusing the dismissal she received, she finds herself in the basement of the Project. Hordes of bee-like creatures roaming the area, feverishly working on… something. Isolated, Bettie finds herself attacked by a mysterious machine and experiencing a visit from her previous aspects the warrior, the princess, the vamp and the fairy. Using their encouragement, she breaks free from the machine, only to find all a room filled with people in honeycomb cells, oblivious to their surroundings and connected to a similar machine from which she escaped. After a wildly fighting her way out of the alien base, Bettie makes her way across the city and boards a train, She needs allies, and she needs them fast. However, she wasn;t the only one who boarded the train.

Escaping from her alien abductors and their strange devices, Bettie Page, model and secret agent, finds herself on a train, trying her best to figure out her next step. She already has lost an ally in Colonel McKnight, who was already been abducted by the buzzing alien invaders, and that turns her list of allies alarmingly short. As she sits on the train, she thinks of Lyssa and Rick Chaplin, contemplating if she can get in touch with them. It is then that an attractive young woman waring a purplish overcoat and Bettie’s face sits down beside our buxom bombshell and proceeds to draw a pistol on the real product. This Other-Bettie is a product of the machine the aliens had hooked Bettie up to last issue. However, while her physical appearance seems impeccable, there are flaws. She hold the real Bettie at bay by holding a gun in her LEFT hand instead of the right, which is her predominate. The Other-Bettie wants to take her back to the alien base and complete the process of becoming Bettie. That is the desired outcome, but it is made clear that if Bettie has to be killed, then so be it. As two more alien copies join them, they walk Bettie through the train toward the back of the train, Bettie begins to try and think of a way out and recounts her situation. Escorted at gun point by an imperfect bee-alien copy of herself, they need her to submit to the machine again so as to complete the duplication process. Then the bee-aliens, or the Prasaepods as they are formally called, will continue to take over everything, believing themselves to be the next evolution of the human race. As they walk through the dining car, the sight of two women as gorgeous as Bettie Page is noted by one of the patrons. In an attempt to cause a distraction, Bettie starts to flirt with the man, only to have her alien guards continue to walk her away. To her chagrin the man does not follow, and Bettie discovers her fate: she is to be taken back to the hive by the drones and have the process completed, while her alien duplicate will continue on to New York to see the people. When Bettie begins to ask what people she was going to see, she figures out that the process was incomplete, they Other-Bettie does not have all of her memories, and they may have to keep the subject alive to continue the charade. This is information Bettie wanted, and with a kick of her shapely leg, she takes out one of the drone guards. As the train pulls to a halt, will Bettie be able to escape, or will the aliens swarm her and force a surrender?

I’ve been reviewing Bettie Page comics in various editions for a while now, and I feel I can safely say that David Avallone (Doc Savage: The Ring of Fire, Zorro: Swords of Hell) gets the character well, partially because he made this version! With this issue, the third of the “Invasion of the Bettie Snatchers” storyline, he continues to up the stakes and write one of the smartest female characters in comics. The internal dialogue that he bestows on Bettie is a smart and well-executed way to draw the reader into the story. This time, it allows him to give you an update on all that has happened and what Bettie’s plans are, without leaving you wondering.

We have multiple artist on this issue, with Matt Gaudio (Black Terror, John Wick) & Pasquale Qualano (Grimm Fairy Tales, Dejah Thoris) sharing duties with Julius Ohta (Sherlock Holmes: The Vanishing Man, Serinity: Downtime and The Other Half), but that does not interrupt the flow or style which we have grown accustom to in BETTIE PAGE: UNBOUND. The panels are wonderfully executed and I especially enjoyed the Bettie on Bettie fight panels as we go from interior to exteriors seamlessly.

BOTTOM LINE: WELL WORTH THE RIDE

BETTIE PAGE: UNBOUND #8 shares a commonality with many of the Bettie Page comics from Dynamite Entertainment: you can pick one up, enjoy it, and have a pretty good idea of what came before. The stories are outrageous and over-the-top, but they still have a feeling of good old fashion adventure. The enemies, while standard, possess their own identity that makes them stand out from the cookie cutter “alien monster invaders” and that keeps the idea fresh.

BETTIE PAGE: UNBOUND #8 is a wild train ride that entertains and keeps up the tradition this book has developed. Well worth getting your ticket punched.

Bettie continues her desperate search to find allies the fight with her against this alien invasion. Pick it up and see whom she attempts to recruit.