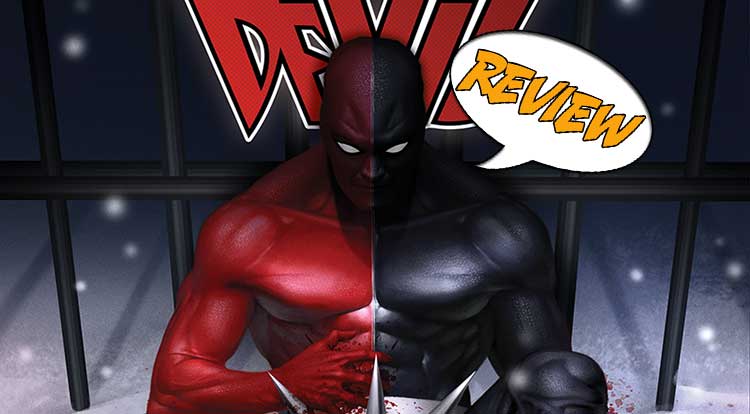 From the awesome pen of Gail Simone comes The Death-Defying Devil #4 from Dynamite Comics!  The residents of Winslow House implore the ‘Devil to stay, to find a home there, but he remains unsure.  Meanwhile, the forces of Darkness roam outside, searching for a way in.  And along the way, the ‘Devil experiences a flashback to an age before time began!  Can he save everyone?  Find out in our Major Spoilers review! Previously in The Death-Defying Devil:  nurtured back to health by the residents of Winslow House, an apartment complex in a rundown part of town, Bart Hill aka The Death Defying ‘Devil, agrees to protect them from satanic forces who want to drive them out.  But Winslow House has its own secrets and if the ‘Devil is to outlast his opponents, he will have to unlock them.

THE DEVIL AT YOUR DOOR

The Death-Defying Devil #4 is a solid issue that should entertain those readers who have remained with the series this far.  It’s not an outstanding issue, though, by any measure, but it is good entertainment.

Writer Gail Simone deftly handles humour and pathos throughout The Death-Defying Devil #4.  The opening scenes, where a married couple provide the ‘Devil with a meal of tortillas, while describing how much they love each other despite their flaws, is gently amusing and a nice opener to an issue filled with action and violence.  Seeing the ‘Devil holding a glass of red wine with a napkin tied around his neck only compounds the sense of fun.  It provides a welcome opener to an issue that is high on flashbacks and action.

We swiftly move from the fun to more serious issues.  After warning off the demonic horde outside the apartment building, the ‘Devil decides he needs to learn more about Winslow House, and one of its deceased inhabitants, a young girl named Mika.  His efforts are rewarded with a flashback to an earlier age of fire and ice, where a version of the ‘Devil faces off against a horde of goblins, saving the life of an analog to Mika.  This information, and the links back to the present day ‘Devil, unveil a new facet to the character, which stuns him and those he is working to protect.

Artist Walter Giovani’s work is solidly within the superhero framework – well-muscled characters filling panels with over the top violence and action.  His framing of the action is very well done, with close ups of faces being matched to action shots.  Horizontal panels in contradiction to each other add pace as opponents swiftly move to confront each other, before opening up to a wild scene of furious violence and action.  Indeed, the budding comic book artist would do very well to minutely examine how Giovani frames the action, and also how his artwork assists in telling the story.

I was a touch disappointed with the writing in The Death-Defying Devil #4.  Gail Simone is a legend in the comic’s field, so I was hoping for something a little more…sophisticated?  The character is from the Golden Age of Comics, so perhaps Simone is riffing on the more simpler plotting and writing from that era?  Don’t get me wrong, she tells the tale perfectly competently, with the characters each having their own distinctive voices and plot arcs.  At times though, the writing and dialogue felt a little hammy and staged, when I was hoping for something more nuanced.

All that said, Simone builds The Death-Defying Devil #4 nicely to its cliffhanger ending, with the dose of flashback action in the middle stages particularly well crafted.  Indeed, her writing is so good that the dilemma the ‘Devil faces at the end of the issue carries a particularly hard punch and is enticing enough all readers should return next issue to see resolved.

BOTTOM LINE:   The Death-Defying Devil #4 is a solid issue in an interesting series featuring a classic hero from the genre.  Simone is clever enough to pack two stories worth of writing into the one issue, with Walter Giovani’s artwork a definite standout.

Flashbacks and mystery abound as the ‘Devil works to unravel what exactly is happening in Winslow House. As in all good comic book storytelling, our major character begins to learn things about himself that he never knew. A decent issue of a fun title that promises more in future releases.