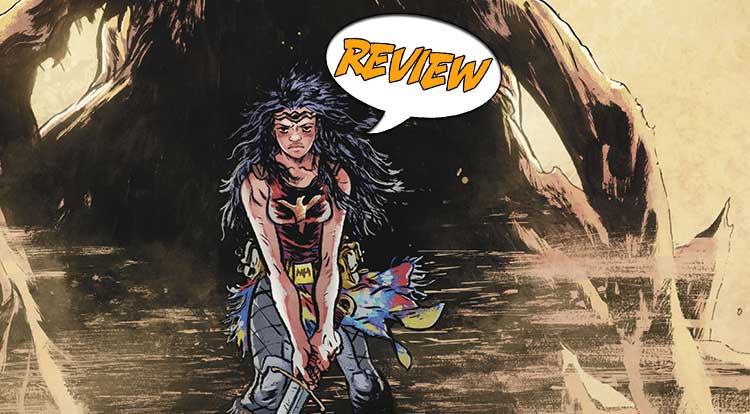 After being woken up from a mysterious slumber, Wonder Woman finds herself in a blasted, mutated, cruel world. Only her love in humanity can save it. As long as it remains. Your Major Spoilers review of Wonder Woman: Dead Earth #1 from DC Comics, awaits! Previously in Wonder Woman: Dead Earth: When Wonder Woman awakens from a centuries-long sleep to discover the Earth reduced to a nuclear wasteland, she knows she failed. Trapped alone in a grim future, Diana must protect the last human city from titanic monsters while uncovering its secret of this dead Earth-and how she may be responsible for it

A Broken and Harsh World

Wonder Woman: Dead Earth #1 begins with a young Diana and her mother talking. Diana’s mother tells her how she was born, then the bombs fall. Cut to a group of scavengers venturing into an abandoned forest.  In their quest for something to bring back to their home they are attacked by a gruesome monster.  The group flees and in their haste find themselves in the basement of a building. As the beast comes down on the group it’s intercepted by Wonder Woman, who has emerged from a sleeping chamber after it was destroyed in the scuffle. She managed to kill the monster but not before it kills one of the scavengers.  The scavengers explain that the earth has been decimated by nuclear war and mutated beasts now roam the country.  Diana explores through the building where she was found and realizes that it’s Wayne Manor after discovering the rotted corpse of Batman. She takes his utility belt and leaves with the scavengers.  They reach a human settlement but Diana is ambushed and knocked unconscious by the scavengers.  She’s presented to the leader of the settlement, a man named Theyden, who claims her as his bride. Diana awakens and fights Theyden and his men but is overpowered and thrown into prison before she’s sent to a gladitorital ring.  She prepares to fight her opponent who turns out to be a mutated version of Cheetah.  Diana reaches out to her and Cheetah recognizes her, but says she has to kill her. During the fight a massive horde of monsters attacks the city, overwhelming the guards.  Soon the whole city is overrun, until Diana turns the tide of the invasion and saves the city.  She claims leadership of the city and has Theyden thrown in prison.  She addresses the townspeople, telling them she intends to lead them to safety, to Themyscira

A Brutal and Blunt Tale

The first thing that jumps out at me in Wonder Woman: Dead Earth #1 is it’s lack of subtly.  This book wears it’s themes and content right on it’s sleeve.  Diana establishes her very quickly as a paragon of love and humanity, while everything else around her is either dead, mutated, or twisted.  It takes her no effort at all to not only forgive the people who imprisoned her, but then fight for them, and take on the role of their protector. This issue also doesn’t take much time to firmly establish this as a Wonder Woman book, not a secret Justice League story, like some of these sorts of stories do. By showing a dead Batman in the first half of the book, there’s no denying that this is Diana’s tale. On one hand the bluntness in this issue is nice and it’s the sort of story that seems perfect for Wonder Woman. On the other hand, some of the dialog is so straightforward that it comes off as hokey and makes Diana seem a little naive and it’s unclear if that’s by design or not. Ultimately, this first issue establishes a really bleak but interesting world.

This is an ugly book, in the sense that the content is ugly in nature and there’s no attempt to shy away from that.  Things are rough, dirty, and gruesome and it’s depicted as such.  All the art in this is effective, for better or worse.  Some of the things in this book are hard to look at, for example, Cheetah, but it’s due to the subject matter and not technique.

Bottom Line:  A Wonder Woman Story Not For The Faint of Heart

I don’t think it’s a stretch to say that out of DC’s Trinity, Wonder Woman often gets the short end of the stick when it comes to standalone, out of continuity, stories centered around them. Which is why I was excited to hear that Diana was going to be getting her shot at a post-apocalyptic, last hero on earth, type story.  What I wasn’t expecting though was an opener that really solidified it as a Wonder Woman story, not just because she stars in it, but the themes established are such that really only she could star in it. The only thing that really hurts this issue is some rough lines of dialog, but they’re few and far between. 4 out of 5

Wonder Woman: Dead Earth #1 is a brutal beginning to a story that allows Diana to shine in an ugly world. The thematic elements here shouldn’t be unfamiliar to long time Wonder Woman fans, what makes this fresh is the harshness of the setting and how she fits into that.